A glimpse into how Dwayne "The Rock" Johnson builds his biceps during arm day. 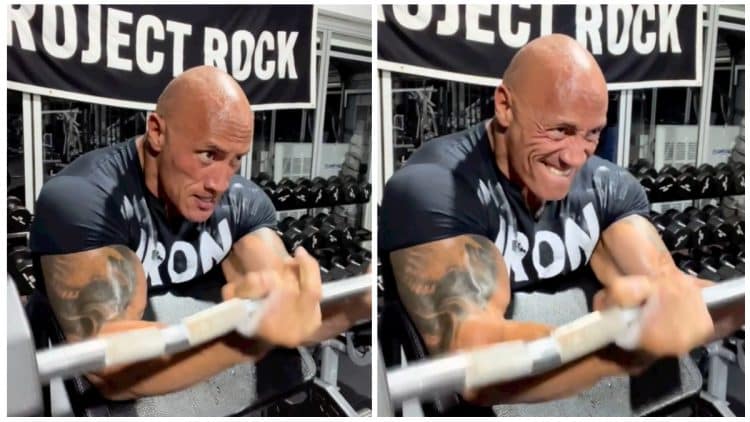 Dwayne “The Rock” Johnson has become the face of dedication and determination when it comes to sticking to your personal fitness goals.

The former professional wrestling superstar made his entry on the world stage with some muscle on his giant stature, but it was after his athletic days were over that he really pushed his physique to the limit.

Known for his mentality to be the “hardest worker in the room,” Johnson constantly reaches new heights in terms of his fitness. The 50-year-old has shown no signs of slowing down. Johnson took it to the next level when he packed on a godly amount of muscle mass in preparation for his lead role in the DC movie Black Adam, and he is far from stopping.

Taking to his Instagram, The Rock provided a look into his arm day workout on Saturday. He can be seen performing a preacher curl on an EZ bar with his signature intense look.

“Success at anything requires obsession — and I apply that obsession to everything I do.

In the quiet of the night.
Obsession fuels the passion.
Passion fuels that fucking chip on my shoulder.
That chip creates the mindset.
Never. Full.

Love to my big uso @c.t.ali.fletcher always droppin’ the gospel 🖤✊🏾”

With this exercise, your biceps work in isolation with limited shoulder support, which increases size and strength.

‘The Rock’ was listening to veteran powerlifter C.T. Fletcher’s motivational speech “Obsession,” infamous for its curse-laden nature. He used the song to give himself an energy boost during the tough exercise and gave a shout-out to Fletcher in the caption: “always droppin’ the gospel.”

“Success, in any fucking thing, success requires obsession,” Fletcher says in the audio. “I can’t say it enough. You must be obsessed. But to obtain success, you must fucking be obsessed with that, there’s no way around it. The fucking best at anything must be obsessed.”

Johnson had recently shared that he favors time under tension during his training sessions. He’s renowned for showing off his incredibly grueling workout routines online, which he usually does at his home gym named ‘Iron Paradise.’ It certainly lines up with the preacher curl, which is one of the best exercises to focus on quality, and controlled reps for the ‘burn’ feel.