After fighting in the hospital from repeat rotator cuff surgery, Wheeler revealed that his transplanted kidney from 2003 is beginning to show signs of 'wear and tear.' 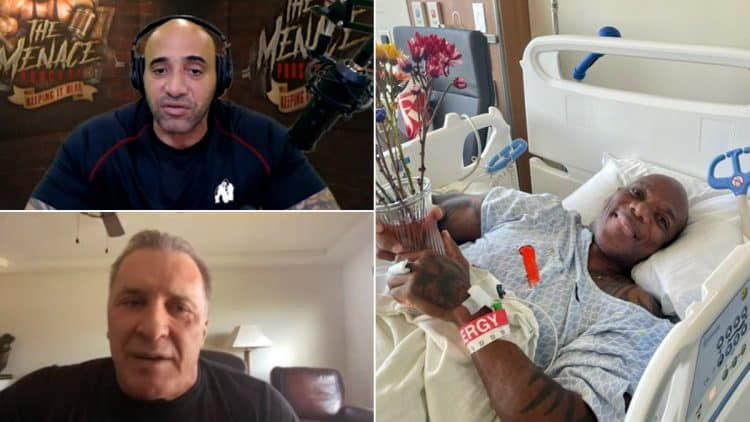 Bodybuilding legend Flex Wheeler has sacrificed more than most during his career, which spanned from the 1990s to the mid-2000s. In a round table discussion with Dennis James, Wheeler spoke in length about the challenges he’s faced in the hospital after a repeat torn rotator cuff surgery resulted in complications.

Wheeler is considered to be one of the best bodybuilders in the world that didn’t capture the coveted Olympia title. He is a four-time Arnold Classic winner, and always made a lasting impression at shows with awe-inspiring conditioning and balanced proportions. Nicknamed “The Sultan of Symmetry,” Wheeler weaponized aesthetics even when the sport seemed keen on favoring mass monsters.

In 1994, Wheeler was involved in a violent car accident. Upon examination, medical professionals diagnosed him with a hereditary kidney disease. Nine years later, the Men’s Open veteran was forced to get a kidney transplant. Health issues continued to hamper the California native years later after an emergency surgery in 2019 went awry. Due to serious complications following blood clots and kidney failure, doctors decided to partially amputate Wheeler’s right leg.

Last October, Flex opened up about Covid-19 diagnosis that left him in acute kidney failure. The legend underwent another procedure a few months ago in March to repair his back. The operation left him pessimistic about life, given the number of surgeries he’s had to endure. As of late, Wheeler was hospitalized yet again for a repeat rotator cuff procedure. Hours after the painful procedure took place, Flex explained that he was stuck in the hospital for over ten days, still in pain.

Fortunately, the bodybuilding legend was able to share details of his struggles on Dennis James’ Muscle and Fitness podcast recently.

During the round table discussion, Wheeler talked about some of the recent surgeries that left him in pain.

“I was scheduled to have my right shoulder done but I re-tore that same shoulder. They said, well let’s go ahead and do your left shoulder, then we’ll do your right. So, we went in, we’re getting ready to do the surgery from the ultrasound, and he said listen I’m going to take some cadaver issues and bones because it looks pretty bad.

“Long story short, Dr. Yee as my surgeon said, ‘man, when I got in there, it looked like a bomb went off. I said, ‘what do you mean?’ He goes, ‘it looks like an explosion.’ So, the one hour surgery turned into four hours. The pain from all that was crazy. They ended up having to keep me at first just because of the pain.” Flex Wheeler told the round table.

Flex Wheeler explained it’s unsafe for kidney transplant recipients to get dehydrated. He added that his kidney problem and numbers have become ‘super unstable’.

“Then, I got some type of GI infection. I started having like diarrhea for four days straight and then constipated. So, being that I’m a kidney transplant patient, getting dehydrated is not safe for me, which then triggered my kidney to start having problems.

So, still having a GI problem but mostly right now it’s a kidney problem because it’s really unstable now. My numbers are super unstable. They scheduled me for a kidney biopsy, to go in because the kidney is 20 years old. Average kidneys don’t last over seven years, that’s the average life for a kidney.”

Before getting emotional about his current situation, Wheeler revealed that on average, new kidney transplants last around seven years. Thus far, the bodybuilding legend’s kidney has made it over 20 but said they are now showing signs of failure.

“When you get a kidney transplant, for a normal person, it lasts about seven years. My donor was very, very petite. Obviously, I’m not the smallest guy in the world, it’s stressful for that kidney anyway because it’s so small. My point is, 20 years is amazing just for a healthy person with a kidney transplant. You know, the kidney has done its job but it’s showing definite signs of wear and tear. They are concerned that it might… like Chris [Cormier] said, I got something in my throat… It’s showing signs of failure.”

After publishing a ‘goodbye to the dreamer’ post on Instagram a few days ago, the bodybuilding community expressed concern for Flex Wheeler and his deteriorating health status. He shared that the post wasn’t meant to worry anyone.

“You know, I consider myself a dreamer in bodybuilding and everything. So, I’ve done that same video before. I just would say, ‘The Dreamer’. So, if you listen to the music, the second song was really powerful. Wheeler explained. “That’s what I’m saying. Basically, they’re saying that they can never have this, that they are dreaming. So, you know, I’m just saying, say goodbye to the dreamer.”

After explaining the cryptic post, Wheeler revealed that he suffered from another Covid-19 infection earlier this year but didn’t want to bring it into the public’s eye.

“I got Covid again. I just got over it. Yeah, believe that crap man. Yeah, it was shorter. Yeah, I got sick. I ended up in the hospital. I just didn’t want to talk about it this time, it was like overkill. I knew I wasn’t as sick and you know, there’s still people expiring from this. I didn’t want to bring it up and then there was people in a worse situation than I was.”

“First and foremost, I’m going to apologize because I’m going to get emotional. Wheeler pauses and sheds a tear.” “You know, I really… of course, everybody knows I’ve been suicidal since the first time I tried to take my life. I was like 11. Then, you know, I’ve tried throughout my entire career. Even training with Chris and banging and competing and winning shows all of the world. I would consistently still try to take my own life.”

Despite losing his right leg, Wheeler said that wasn’t his ‘tipping point.’ The bodybuilder mentioned he was able to communicate with people on a different level following the operation.

“What really happened is when I lost my leg, you would have thought that would have severely been my tipping point, but it wasn’t. I really, I have to accept what a lot of people have been telling me over the years. I was put here for something greater than competing.

When I lost my leg, I just, like I said in the video, when I wake up and look down and see its missing, either I’m going to lose it or I’m going to be alright. When I woke up and I looked down, I’m like ‘alright, it’s gone.’ But it gave me an opportunity to communicate with people that I would have never been able to.” Wheeler explained.

While he’s taken a step away from the sport for good, that hasn’t stopped Wheeler from helping train newer school bodybuilders. He is Andrew Jacked’s prep coach and played a major role in helping with posing instructions too. Jacked won the overall Amateur bodybuilding title earlier this year at the 2022 Arnold Classic Amateur.

As it stands, Jacked plans to compete at his first pro show in under four weeks at the 2022 Texas Pro. It remains unclear if Wheeler’s health will hinder his ability to train his pupil. Judging by his happy demeanor on the recent podcast, the 56-year-old hasn’t given up on his health just yet.