The Rock was kind enough to layout his regime but he doesn't feel right about posting training videos. 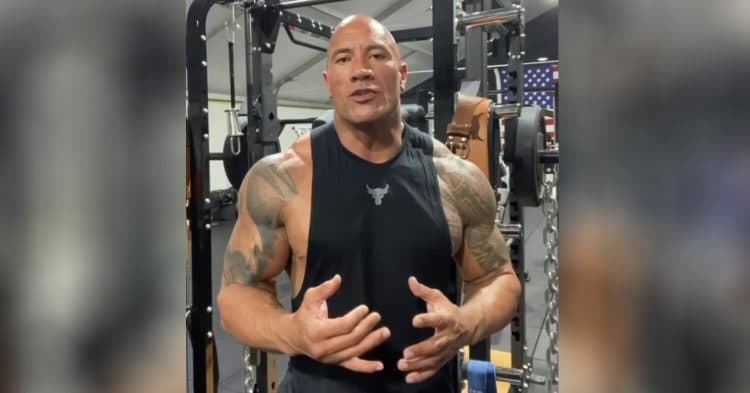 Dwayne ‘The Rock’ Johnson is undoubtedly the biggest film star today. He’s known for being a commanding figure in his roles due to his sheer size. But the Rock has always been a fitness fanatic from his high school football days to when he was a big WWE star.

He has the experience to be able to manipulate his body and put on hulking size at will. But it also helps when he has access to the same resources as he did before the current global health crisis. Johnson has his own full-sized home gym (check out his newer home gym in Virginia). Although, he’s ‘The Rock,’ so being able to workout will probably never be an issue for him anyway.

So he recently discussed his current training regime and other interesting details about his current endeavors for fans around the world.

“I don’t take any of this shit for granted that I’ve been a lucky son of a bitch for years to have my own personal gym. So I made sure and I promised myself that when we did get put on lockdown and when it went into effect that I was going to train my ass off, harder than I’ve ever trained before.”

Johnson explained that when all of this is lifted he has to continue shooting the film Red Notice and, of course, the DC movie Black Adam which is scheduled for release in December 2021.

And he doesn’t want to be the type of person who shares his training videos using equipment when others don’t have it. “I’ll let other celebrities do that shit, it’s not my style“.

Johnson then went over his weekly workout schedule with slightly more detail than what he provided in the post. Then he ended with some words of encouragement…

“I don’t know what you guys are going through around the world but I do know that we are all, regardless of what color our skin is, where we’re from, what our occupation is, what our religion is, it doesn’t matter“. “We’re all experiencing this thing together. It’s the same game different levels, same hell different devils but we are going to get through this thing.”

“Appreciate ya burning questions coming’ in hot,” he wrote in the post.

The Rock is a hulking 281 pounds right now which he also mentioned in the video.

And, of course, he mentioned that he won’t be posting any training videos as explained previously.

“Will I ever post vids of me actually working out/ No.
While millions and millions of you can’t workout in your gyms, the last thing I’ll be is an asshole posting videos of myself working out in mine. Just know I train angry and pissed that we’re all in this situation and I CAN’T WAIT for all of you to return to your own gyms and train like BEASTS.

Thank you all for the awesome questions.
Stay healthy, safe & positive as best you can.
We’ll get thru this.
I’m right there with you.”

Dwayne Johnson had a rough start to 2020 with the passing of his father, Rocky Johnson, who was a legendary WWE wrestler. But it has also been an awesome year for him too, praising his Daughter Simone for following in his footsteps and signing with the WWE which was a proud moment for him.

He has also got so much more in the pipeline after the health crisis passes and as always, we’ll be sure to provide updates on his endeavors.