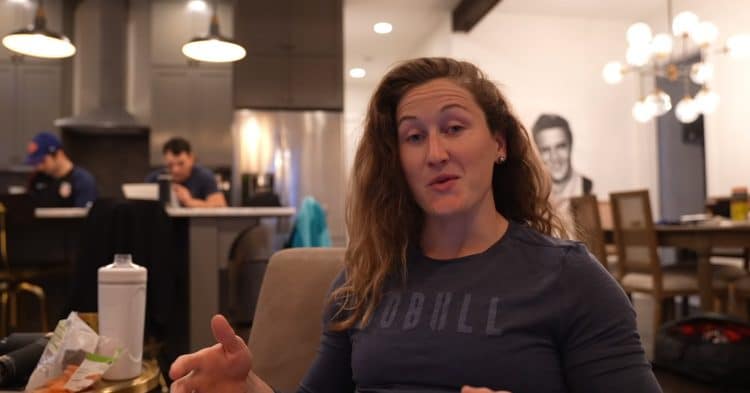 The CrossFit Open has officially begun and launched on March 11, 2021, with CrossFit workout 21.1. The first of the workouts started with just a few movements, including wall walks, double-unders, and bear crawls, and was titled Engine vs. Skill. After the announcement of the workout, CrossFit’s Fittest Woman on Earth ® Tia-Clair Toomey and her husband and coach Shane Orr provided tips on how to crush the time cap in the workout.

Wall walks made their CrossFit debut this year, with this first workout emphasizing the shoulders and upper body strength.

As we reported on the launch of the CrossFit Open, wall walks involve laying prone on the floor with feet against the wall.

As we reported yesterday as the CrossFit Open launched, wall walks begin with lying on the floor with feet against the wall. The movement then requires walking with hands towards the base of the wall. When in the handstand position, reverse and move back to start for one complete rep.

In no time at all, the CrossFit elite have opened up about how excited they are at the launch of the Crossfit season. Many have taken to YouTube to share their thoughts on the workout, and how to continue on in the CrossFit Open.

CrossFit’s four-time Fittest Woman on Earth ® Tia-Clair Toomey and her husband and coach  Shane Orr were among the first to hit YouTube with their thoughts and excitement.

On the workout announcement, coach Shane Orr noted right away that the first workout was upper-body intensive.

“Think about shoulder intensity so managing that it’ll be easy to, and then rest break up your double lines because it’s easy to go through that…obviously that’s a lot of volume for double unders, for those that are at the fitness level or you know coming up the ring.”

His strategy for Tia going in was to work out the break schedule in advance, coaching her to perform the wall walks without a break, and use the extra time on the double-unders.

“Quick observation, on 21.1 is the double under is certainly going to be a lot of volume there. You’re not confident at that movement, so breaking that up or considering that early on to break that up would be a wise move given that most of the reps are at the back end of the workout. So don’t go too hard at the start, maintain a good pace there.”

Shane Orr felt that the pace on the wall walks should be steady from the beginning. He noted the remainder of the workout would have a higher rep count, and the breaks on the timed event would be more needed in the second half of the workout.

Team Mayhem Freedom also has thoughts about the CrossFit Open Workout 21.1. Mayhem Freedom’s Director of Online Programming Jake Lockert predicted that the workout was difficult enough that the time cap would be a big hurdle. That proved to be true.

Those who could do the 21 wall walks might stay in the top 10 percent to qualify for the quarterfinals, even if they didn’t finish. Lockert encouraged the same strategy; to be slow at the beginning of the workout to save time for the double-unders. The leaderboard shows that many athletes struggled with this, even some of the most elite athletes could not finish in the time frame. Only four, including last year’s third-place finisher Kari Pearce did it all within the time.

The 2022 CrossFit Semifinals have started, and some athletes have had a remarkable start. Although the Semifinals consist of 10...