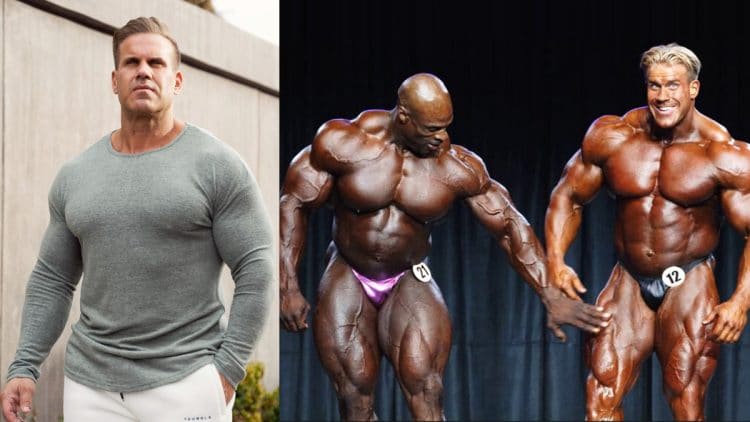 Jay Cutler is one of the most successful bodybuilders to ever compete in the sport and parlayed his success to become a successful entrepreneur. In a recent YouTube video with Greg Doucette, Jay Cutler provides in-depth details about his training regimen.

Cutler maintains that strenuous training was an essential factor contributing to his success. With names like eight-time Mr. Olympia champion Ronnie Coleman, and five-time Arnold Classic champ Dexter Jackson competing in the same era, Cutler succeeded against some of the most decorated bodybuilders in the history of the sport.

Cutler’s rivalry with Ronnie Coleman goes down as one of the best in bodybuilding history and both are considered to be among some of the greatest champions to ever grace the stage. Pushing their bodies to the limit, both athletes were able to become Olympia champions in the Men’s Open division. In 2006, Cutler dethroned Ronnie to become Mr. Olympia champ. The intense training Jay speaks about below is indicative of how fiercely competitive that era of bodybuilding was.

In a recent YouTube video with Greg Doucette, Cutler reveals what his training was like back in the day. Jay also explains how he tried to mimic Ronnie Coleman’s training to cultivate a bigger body.

“I think you know, like I do back one day. Legs one day. Shoulders and triceps, I do chest and biceps. You know I do chest day. You know I train two days on one day off. That’s the cycle that I run now. And I found that was the best. Two days of training for me with the volume, is enough before I need a day off.

Especially if I was training twice a day, think about that, that’s four workouts over two days. I was dead. I was doing, for the bigger body parts, I would do forty sets for back and legs. I would do 25 for each, you know, I was killing it on those days.”

Jay is adamant that muscle groups need three days to recover before training them again. He does two days on, one day off and believes that formula has been working to his benefit for years. In order to add size to his physique, he shares that high volume and high reps were especially important for bigger body parts like the legs and back.

“Listen, I always train solo. So, I would always do what I call ‘feel sets’. I hate to call them warm-ups because it was more just to get my mind muscle connection. Yeah mind to muscle connection was important for me right. So, I would kind of get in there, I would focus on 8-12 repetitions, the broad range, but I could do more reps, but I was still getting a good burn when I got to 12.”

Another important aspect of Jay’s training is taking short rest periods. Even today, he still implements shorter rest periods. In between each rep, Jay maintains that a 45-60 second rest was sufficient for him.

“I would always choose the weight and of course, that was how it always started to be honest. Chris taught me everything is 10-12 and that’s kind of what I’ve stayed with. Listen, the rest time was efficient for me. It was 45-60 seconds rest between every set. Which when you’re doing 4-5 500lb squats, listen I was on the floor doing T-bar rows with 8-10 plates, bent barber rows of deadlifts, four or five hundred pounds. It was hard to breathe, especially when I was 290lbs. Even today, I still train with short rest periods but right now my schedule is still two on one off.” Jay Cutler told Greg.

Cutler believes Coleman’s training in Texas was unlike what most bodybuilders were doing at the time since he prioritized lifting heavy weights with lots of reps. Without social media, Jay explains that it was harder to mimic Coleman’s high-volume training since the footage was so limited.

“Yeah, I mean everyone becomes accustomed to it. I mean, I used to look at myself like a thoroughbred man. People would come train with me, and I felt like I had that edge over everyone with my training style.

Remember, I was training in Vegas. We had air conditioning gyms, but the gyms were hot. I would do a lot of lunging outside, and I would try to mimic a lot, I’m not going to lie. Cutler continued.

You look at what Ronnie Coleman was doing in Texas, and there was anyone more hardcore as him at the time and this was only with DVDS. This wasn’t social media, so you watched all this stuff. So, we watched Ronnie train and everyone tried to be Ronnie Coleman.”

Given the success, Jay has displayed throughout his career and even after bodybuilding, it looks like his Coleman-Esque training regimen paid dividends in the end. Cutler maintains that high volume and high rep workouts are what enabled him to reach the top of the sport.