Seven-time Mr. Olympia Phil Heath discusses his recent downsize and his current ambitions in the sport of bodybuilding. 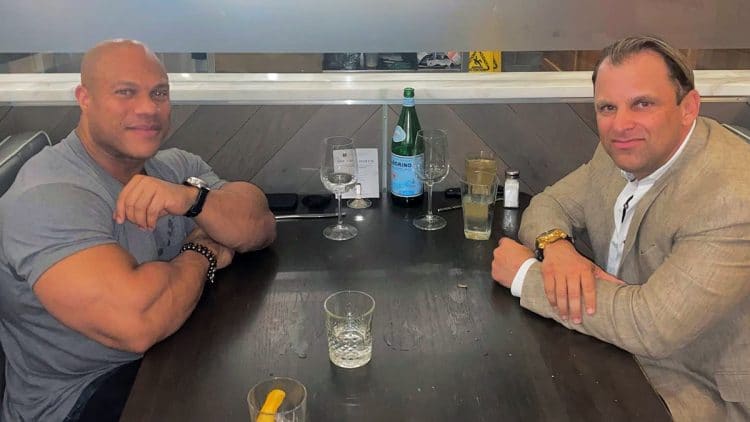 Bodybuilding royalty Phil Heath is a legend of the sport and known for maintaining his condition year-round. In a recent video, Phil Heath discussed his recent downsizing and the possibility of competing at this year’s Mr. Olympia show.

Phil Heath has been a dominant force in Pro bodybuilding. “The Gift” has the distinction of having won a total of seven Mr. Olympia Men’s Open titles for seven straight years. Heath’s incredible streak was broken after a famous showdown between the late Shawn Rhoden in 2018.

Heath dominated the stage with massive size but was unable to capture gold at his last Mr. Olympia show in 2020. He placed in third, though it appears he hasn’t completely dismissed the idea of one day returning to the biggest show of the year.

In a recent video, Heath reveals that he’s tipping the scales at 255lbs and reflects on losing weight after 2020 to pursue acting work.

“So, we’ll talk about that real quick. Yeah, I lost size after competing in 2020 because in 2021, I was looking to film or getting into acting. So that was one of the main reasons why I wanted to make sure I lost some size and it was a great experience to be able to go through that process. Now I’m really, to be quite honest, enjoying the gym in a much different way. I have no ambitions of growing another 25, 30 pounds. Currently, I’m like 255 pounds.”. Phil Heath said on YouTube.

“I think that’s a pretty good size for me and necessarily rushing into competing is probably not a smart idea. My thing is about overall health and a lot of people have commented ‘oh man you looks so healthy. You know people saying ‘wow, like your skin looks good, this and that’ Those are definitely things at 42 years young, I always want to make sure I have.

I think it’s very interesting how a lot of bodybuilders over the past couple of years have passed away. Unfortunately, that has happened. We don’t know why but most importantly, I wanted to make sure I was doing everything in my power to make sure I was being as healthy as possible.”

Phil admits he’s not rushing back to competition. With the number of bodybuilders who have suddenly passed away in the last few years, the seven-time Mr. Olympia titleholder believes his smaller weight is an asset at 42 years old.

“That was another reason, quick shoutout to my friends and partners over at Transcend HRT Clinic that I got with them because I wanted to get my bloodwork on point and take things slowly and methodically.

You guys saw the picture from me the other day chilling in the kitchen holding up my favorite Cuban empanadas and you can see my abs look way better. That was definitely something I felt, that’s face it guys we talked about this before. That was a huge deterrent from me winning number eight from what the judges were saying and a lot of fans were saying.”

Suffering injuries in 2018, Phil heath underwent surgery following his second-place finish at the 2018 Mr. Olympia. With discomfort from his distended stomach plaguing him in competition, he’s now addressing the weakness as a challenge.

“So in order for me to want to come back and to do anything. I think I need to address those things and make that into a strength and I definitely take upon that challenge. I just want to make sure I’m taking the necessary time to heal. By me taking a couple of peptides…  injecting that everyday around that area has reduced all the inflammation and distention. Quite frankly, I’ve been able to pull off the vacuum pretty good now and then.”

Heath shot down the notion of competing at the Masters Olympia which looks to be returning in 2023 according to Jake Wood. “The Gift” left fans in suspense after revealing his plans to meet with Olympia President Dan Solomon.

“Probably not. I think that would kind of be a cake walk. I think more people to be quite honest, more disappointed because they’ve seen me dominate that thing and then wish that I did the Open. So it would be funny of doing both Masters and Open but I’m not that old. So I don’t even know what the qualifications are and let’s keep it real guys I have no idea of what the money looks like as well.

I’m at this point in time to where I want to make sure I’m utilizing my health and my time in the gym wisely and if I was going to do a competition it would have to serve an even greater purpose. No one is going to reach out to me about it. I shouldn’t say that, because I have a dinner with Dan Solomon tomorrow night.”

Despite undergoing a major body transformation, it appears Phil Heath isn’t quite ready for a 2022 return to Olympia. Given the improvements he’s made to his abdomen, with extra time to prepare his physique, Phil could easily mount a comeback in the coming years.