This TikToker has a 'hickey trick' that will keep men from pestering her while she works out alone. 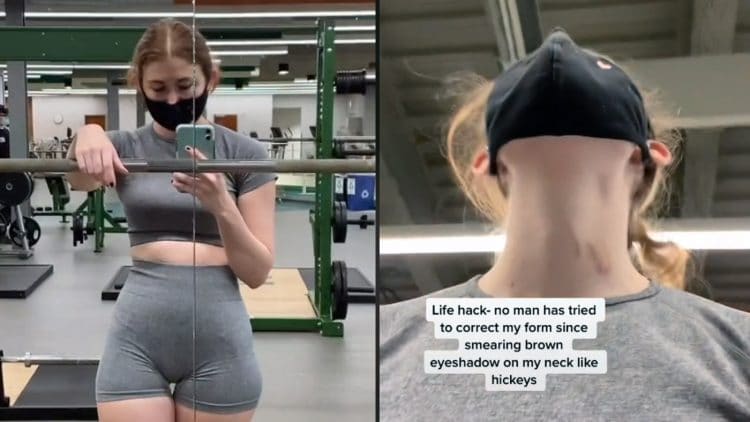 TikTok user @blackmarketbagelsociety0 is claiming that men stopped giving her unsolicited advice in the gym after she started putting fake hickeys on her neck. The woman maintains that her life hack is simply brown eye shadow which she applies generously to her neck.

After working out with the smeared makeup on her neck, the results were uncanny, she was not bothered by men during her time at the gym. In jest, the woman attributes the results to her new form while exercising but truly believes the makeup life hack is a keeper. After joking about her exercise session in the captions, “Guess my form is just better this week,” the post has garnered north of 191,000 likes so far.

According to many people who responded to the TikTok video, a large number of women suffer from this pervasive issue at the gym. In the comment section, they lamented the issue especially in the current social climate today.

“They respect the ‘man’ you’re ‘with’ more than you as a human being,” wrote another, “which says a lot about society.”

Other people in the comment sections echoed similar sentiments but underlined how sad and sorry they are, that women are forced to go to such lengths in order to not be harassed by men while working out.

Prior to the TikToker’s happenstance, a few months ago, personal trainer, Heidi Aragon also broadcasted a similar experience on her TikTok account. According to Aragon, she was working out and a guy inside the gym continuously stared at her in a creepy manner.

While some commenters drew attention to her outfit, the whole interaction was caught on video, and the man in question is uncomfortably leering at her from afar.

Sadly, the problem doesn’t seem to be subsiding anytime soon. If you are a woman, TikTok [email protected]’s life hack appears to have some value. Keeping some eye shadow handy could make your life a whole lot easier at the gym if that creep starts heading your way…

Zendaya is one of the most popular young actresses in Hollywood. Star of the hit HBO series Euphoria, she is...