The 2021 World's Strongest Man continued with Day Two, as athletes continue to try qualifying for the Finals 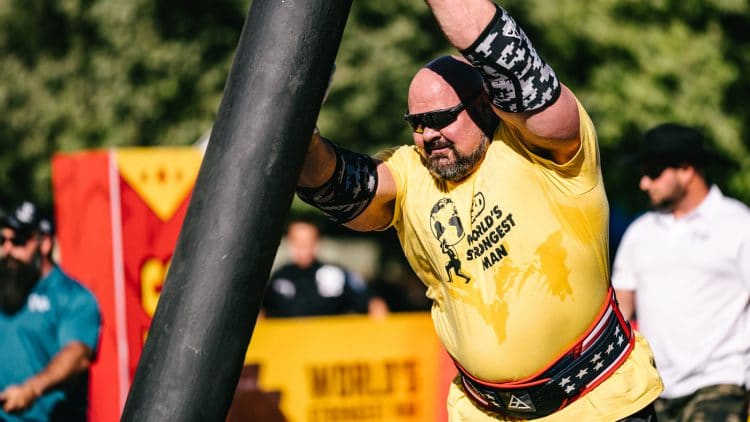 The 2021 World’s Strongest Man, running from June 15th-20th, continued on today, with Day Two of qualifications, in Sacramento, California. This is a breakdown of all of the action, which saw some more exciting performances from the best strongman athletes in the world.

Day Two of the 2021 WSM only featured two events, with each qualifier group completing one. However this was one of the most exciting days of competition, with fan favorite events like the Train Pull and Fingal’s Fingers.

The contest continued through to the second day, with the absence of several athletes. Luke Richardson withdrew after the first event, due to injury, and Terry Hollands announced his WSM retirement, after suffering an injury of his.

Then on Day Two, Chris van der Linde was revealed to have been forced out due to injury. At the time of writing, no information has been revealed as to the specifics of his injury.

While the contest will not be available to watch the 2021 World’s Strongest Man until later in the year, there is a special, Behind-The-Scenes programming available through the WSM official Facebook page.

Below are the results and standing from the second day of the contest.

2021 WSM Day One Results And Recap

Check out the scores below:

Initially the event was to be 50-ton train car pulled down 20m track. However technical issues led to officials removing the train car, leaving only a 20-ton caboose to be pushed from behind. Scored for time. Performed by Groups Two and Three.

Check out the scores below:

Still To Come For The World’s Strongest Man

With Day Two in the books, there is just one more days of the qualifying rounds of the 2021 World’s Strongest Man, before the two-day Finals. Here are the events that are still to come:

Stay tuned to Fitness Volt for more coverage of the 2021 World’s Strongest Man, as the rest of the contest unfolds.

Glutamine Guide: Benefits, Dosage, and When To Supplement