See who Patrick Tour chose for his top 7!

Top prep coach Patrick Tour talked with Global Muscle Radio and he was firm in his pick for the “new” (2019) Mr. Olympia champion…

“I think Roelly is going to win the title“.

Now, Roelly Winklaar placed third at the 2018 Olympia behind Phil Heath, which was definitely a surprise. So naturally, he was the favorite to win the 2019 Arnold Classic but greatly disappointed with a fifth-place finish due to poor conditioning and Brandon Curry got the win.

And Tour explained at the beginning of the video that he does like Brandon Curry, (especially since Shawn Rhoden and Phil Heath are out from what we know so far) and he even thinks Curry would be a great Mr. Olympia.

But he’s set on Roelly Winklaar being new champ come September even saying the Roelly is “smelling blood” right now, especially with Rhoden and Heath out.

“Knowing Roelly, he needs something big to challenge him. He is going to destroy people”.

And apparently, Winklaar is looking unbelievable according to the people who are physically witnessing his prep. Although, this has been the story for a while and conditioning was his issue this year.

So, Roelly will have to really pull it together if he’ll stand a chance against the rest of the top competitors predicted to place in the top 5. He already has the size and genetics to be at the top but that’s hardly enough with such fierce competition.

Patrick Tour gave his opinion on how the other competitors will place and didn’t have time to finish the remaining three predictions. But here are his top 7 picks…

Kai Greene Out of 2019 Olympia, Starring In Indian Movie 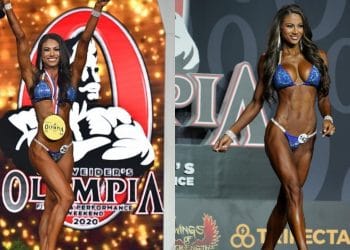