Here's a preview of the potential top 10 contenders for the 2019 Mr. Olympia competition. 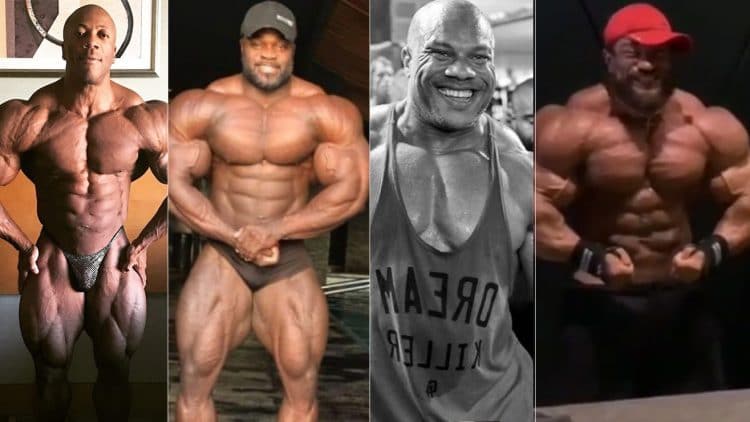 We’re just about three weeks away from the biggest bodybuilding competition in the world. And the top Men’s Open competitors are preparing to battle it out in Las Vegas, Nevada for the most prestigious title in bodybuilding (Mr. Olympia).

Here are the top 10 contenders for the Olympia, some of which are certain to make an appearance, while a few others have not been confirmed yet.

He’s the reigning Mr. Olympia winner (2018), defeating Phil Heath last year, but Shawn Rhoden is still uncertain for a 2019 Olympia appearance after the rape charges recently. American Media Inc. revoked his eligibility immediately after the news but there’s no telling what will happen in a few weeks. Rhoden is still training though and looking rather impressive. But we’ll know for sure if he’ll be defending his title and we hope everything gets cleared up.

The 7x Mr. Olympia champion Phil Heath still has not confirmed if he will come back after having lost to Shawn Rhoden last year. He’s still looking super jacked and pretty close to how he usually does weeks out from the Olympia competition. He doesn’t need to qualify since he’s already won the competition so it would be pretty awesome if he surprised his fans this year and reclaim the title.

Here’s a video from 3 weeks ago…

The legendary Dexter Jackson is still competing at age 49 and his ability to maintain such a freaky physique is just mind-blowing. Jackson won the Mr. Olympia title back in 2008 and he’s won more professional shows than any bodybuilder ever. It would be sweet if he went out with a bang but then again, we don’t even know if he’s going to retire. Jackson won the Tampa Pro in convincing fashion but he is already a lifelong qualifier due to his win in 2008.

Check out his brutal training session with the legendary Charles Glass…

Brandon Curry is one of the sure favorites this year if Shawn Rhoden and Phil Heath are definitely out (Still not certain). He finished with his best placing ever at the Olympia in 2018 (2018), before going on to win the 2019 Arnold Classic of which he wasn’t even the favorite. But man has he pulled it together, and if he comes in even more impressive, then anything is possible... he sure as heck has the genetics and size to do so!

This is Bonac 3 weeks out…

Roelly Winklaar seemed to struggle a bit this year after coming in third at last year’s Mr. Olympia competition right behind the 7x champ Phil Heath. He even won the Arnold Classic Australia last year and was looking phenomenal. Winklaar was the favorite to win the 2019 Arnold Classic but disappointed greatly placing 5th. But it’s a new year and it could be a new Roelly Winklaar if he comes in perfectly conditioned. He definitely has some of the most insane genetics which gives him a big advantage over most competitors.

Steve Kuclo placed 10th at the 2018 Mr. Olympia competition. But he won the Indy Pro in both 2018 and 2019, also coming in 6th at the 2019 Arnold Classic. Kuclo is also relatively young so he has a lot of time to get better but it’ll be interesting to see how he does this time around.

Cedric McMillan has been under the radar as of recently but he’s still a tough competitor with an amazing physique. He placed second at the 2019 Arnold Classic Australia and came in fourth at the Arnold Classic Ohio. McMillan’s best placing at an Olympia was 7th (2016) so he’s not expected to battle it out for a top 5 spot. But, he did receive a special invitation to compete at this year’s Olympia and if he accepts it’ll be interesting to see what kind of package he brings.

Nathan De Asha qualified for the Olympia this year with a British Grand Prix win and he’s quickly becoming a popular competitor in the Open division. He also placed second at the 2019 Vancouver Pro so it’s safe to say he had a pretty good 2019. But with an 8th place Olympia finish, Nathan De Asha will be looking to move up in the ranks sooner rather than later. At 32 years old, he’s relatively young and will be someone to watch in the near future.

Juan Morel has been a part of the Pro bodybuilding scene for a while now. He placed 18th at the 2018 Mr. Olympia competition with his best-ever finish being 10th in 2014. Morel recently had a big scare when reported that his daughter was missing, but thankfully, he found her safe.

Luke Sandoe is making some impressive leaps and at age 30, he’s still pretty young in the game. He placed third at the 2019 Arnold Classic which was his best finish yet and second at the Tampa Pro. He’s got the size and potential to do well in the near future.

Brandon Curry: ‘I’m At My Prime’ Believes He Could Win 2019 Mr. Olympia