Look and train like a boxing champion with Fury's transformation program. 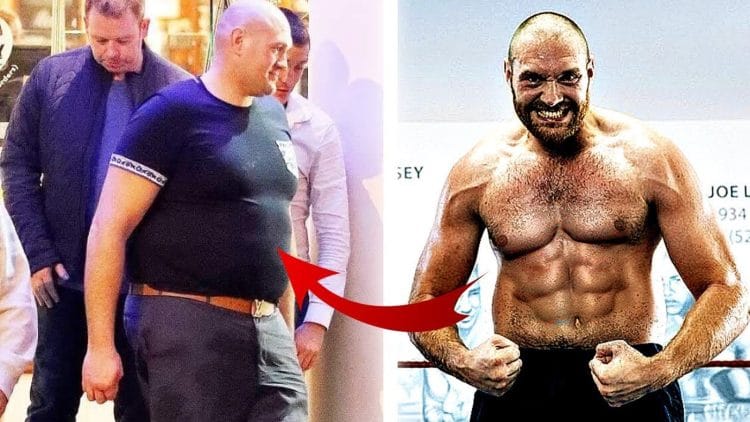 You are not alone if you thought we were referring to a furious Mike Tyson in the headline. Actually, there is a story here. Tyson Fury was born three months premature and weighed just one pound. “The doctors told me there was not much chance of him living,” Fury’s father told The Guardian.

“I had lost two daughters in the same way who had been born prematurely. They told me there was not much hope for him. It was 1988, Mike Tyson was in his pomp as world heavyweight champion, and so I said, ‘Let’s call him Tyson.'”

The British professional boxer is a two-time world heavyweight champion, having held the WBC and The Ring magazine titles since defeating Deontay Wilder in 2020.

He previously held the unified WBA, IBF, WBO, IBO, and The Ring titles after defeating Wladimir Klitschko in 2015.

Tyson Fury’s showdown with Anthony Joshua, who holds the IBF, WBA, and WBO belts, was undone when Wilder’s contractual right to a third fight was upheld in an arbitration hearing.

Fury and Wilder share a history. After much altercations, Tyson and Deontay first met in December 2018 at the Staples Center in downtown Los Angeles. Long story short, the match ended in a split draw which allowed Wilder to hold on to the WBC heavyweight belt and left the Gypsy King frustrated and irked.

Let us address the elephant in the room – The Gypsy King.

But isn’t the split draw the most important subject?

Tyson Fury got his rematch, but more on this later. Let us get back to his nickname – The Gypsy King.

The Fury family has a long history in boxing. Fury’s father initially competed as a bare-knuckle and unlicensed boxer (later as a professional boxer) as “Gypsy” John Fury.

Fun fact: He also experimented with the nicknames ‘The Furious One’ and ‘2 Fast Fury’, but nothing stuck like ‘The Gypsy King’.

But Why This Fascination With Gypsies?

Gypsies are nomadic people with Indo-Aryan ancestry. They moved to Europe between the eighth and ninth centuries. Gypsies are famous for their physical strength and bravery.

How Tyson Fury Took The Nickname ‘The Gypsy King’

Tyson Fury’s 30-0-1 fight record is not the only reason behind his nickname ‘The Gypsy King.’

Coming back to their not-so-love affair. After the split decision draw, Tyson got another title shot. This time around, he trained to finish his opponent with a KO.

Fifteen months later, The Gypsy King did what he does best. He knocked out Wilder after seven punishing rounds to win the world heavyweight title.

Although Wilder won an arbitration case for a rematch (scheduled for 24 July 2021), the showdown had to be postponed after Fury tested positive for coronavirus.

“I want nothing more than to smash the ‘Big Dosser’ on 24 July, but I guess the beating will have to wait,” said Fury. “Make no mistake, I will be back and better than ever. We will fight 9 October and I will knock him spark out.”

Since Fury is getting ready for his rematch with Wilder, it is the perfect time to revisit his diet and transformation program.

But before that, here is a little refresher about Tyson Fury.

Fury won almost every major heavyweight title except the WBC in 2015. He had to vacate each title by 2018 due to mental health issues, extreme weight gain, and a failure to honor the rematch clauses in his contract.

To everyone’s surprise, in the very same year, Fury got over all his setbacks to take on the undefeated WBC heavyweight champion Deontay Wilder in a title bout.

For his transformation, Tyson Fury roped in the renowned nutritionist George Lockhart. Lockhart is the diet coach and chef who controls weight cuts for UFC stars like Conor McGregor and Daniel Cormier and has managed the nutritional needs of boxers, such as two-weight world champion, Badou Jack.

The start nutritionist made five trips a day to a local farmer’s market to fetch enough food to satisfy Fury’s 4,500 calories-a-day need. Tyson Fury’s diet plan was aimed at making him gain weight and get him leaner at the same time.

The diet and training program shared in the article is what Tyson Fury used to get back to his A-game.

Tyson Fury starts his day with a big bowl of yogurt and fruits. To ensure he eats a healthy dose of antioxidants in his breakfast, Fury adds a ton of berries to the mix.

Fury starts his training and workout early in the day. He has a pre-workout shake with 4,000 milligrams of beta-alanine and 200 milligrams of caffeine half an hour before his workout.

During his workouts, Tyson has BCAAs with creatine and a tiny dose of sugar. The extra sugar helps him power through his intense training sessions.

Tyson Fury has a whey protein isolate shake for his post-workout nutrition. He also gets dextrose in a supplement form. Dextrose is a simple sugar made from corn and is chemically identical to glucose, or blood sugar. Fury has his meal an hour after his post-workout shake.

For Tyson’s lunch, we will let Lockhart do the talking.

“Tyson likes spicy food, which blows my freaking mind because being an Englishman, it’s usually not the case. I cooked him up some shit — because I’m half Mexican — that put my tongue on fire and he’s cool with it. He gets a curry almost every single day for inflammation. There are a million different curries out there, so I’m constantly coming up with new curries.”

Must Read: Inflammation: The Good, The Bad And The Ugly

Yes, Tyson Fury has two lunches in a day. Get over it.

Due to his large appetite and high meal frequency, Tyson Fury gets his nutrient from a huge variety of high-quality sources. It is a win-win all around.

Tyson Fury works out again after lunch and is fueled by another batch of pre, intra, and post-workout shakes. Eating and drinking are a part of the job for Fury.

Tyson Fury eats chicken vindaloo with turmeric for its anti-inflammatory properties. The meal might be tweaked depending on whatever meat Fury has not had earlier in the day.

So you thought Tyson Fury has two lunches but a single dinner? You know nothing, Jon Snow.

For the last meal of the day, Fury eats power/energy balls. It is almond butter, oatmeal, coconut, honey, pecans, and dark chocolate chips all rolled into balls. Tyson Fury eats a couple of those before he goes to bed.

If you came here looking for a bodybuilder-type program, you are in for a disappointment.

Tyson Fury is the boxing world heavyweight champion, and his workouts are focused on getting him ready to kick his opponent’s tooshies inside the boxing square.

As part of his training routine, while preparing for a match, Fury sometimes runs six miles up a mountain. Mountain running is as much a test of mental strength as it is of physical endurance.

Tyson Fury trains with jump rope and battle ropes. He hits the jump rope hard and does different types of fast footwork combinations to improve his movement. Fury does thousands of jump rope before going into a fight.

He then goes all out with the battle ropes as they are a great way to build endurance, work the upper body and burn the extra calories.

Fury spends hours every day shadowboxing and sparring. A boxer relies on them to improve his game and get battle-ready. Tyson does multiple sessions of sparring each day at the gym.

For a boxer, fancy footwork is a must if they want to see a boxing match to its end. Tyson Fury is a big guy, and he concentrates a lot on his legs to build the needed agility and strength.

Tyson Fury follows a systematic approach to training, especially before a match. His coaches have him lift heavy and do compound strength routines farther out from a showdown.

As he approaches a bout, he then switches to lighter weights and works on his explosiveness. There is no doubt that whatever he has been doing with his training has been working out.

Tyson Fury’s history of working with trainers is as erratic as the boxer himself. Every trainer brings with him a different training style. But no matter who he is training with or what approach they are taking, Fury makes it a point to put in his 100%.

A champion is aware of his weakness, and Tyson Fury is no different. He is always looking to improve and goes to extreme lengths for it.

For his last match with Wilder, Tyson split with his uncle (and trainer) Peter and teamed up with trainer Ben Davison. He then called it quits with Davison and reunited with SugarHill Steward.

Although Fury follows a hectic schedule, he makes sure he is not over-exerting himself before a showdown. Close to a match, Fury only works his upper body lightly because recovery is key to strength. He also gets massages frequently to help with mental stress as well as muscle aches and pains.

Talking of recovery, Tyson Fury also claims to pleasure himself up to seven times a day to keep his “testosterone pumping.”

Thank god they were gloves while boxing.

Tyson Fury is on his way to becoming the greatest heavyweight boxer of all time. The comeback champ has defeated mental health problems, addiction, and obesity to conquer the top spot on the food chain. His new diet and training program is paying dividends, and we cannot wait to see him in action again on 9 October.

How to Increase Squat Performance