Vitaly Vivchar bench pressed 50kg/110lbs for a record 76 reps while holding his breath under water. 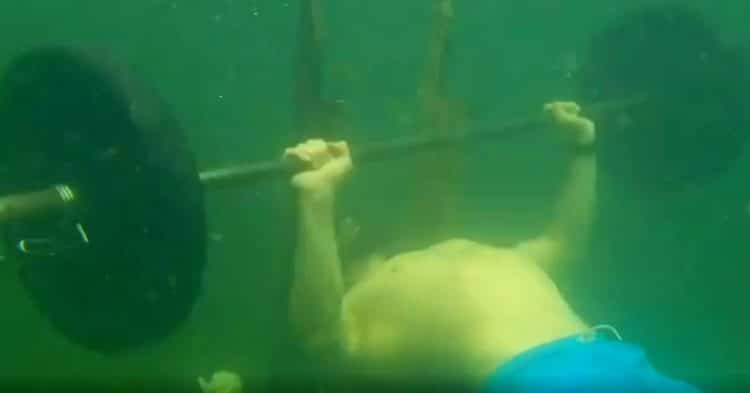 Vitaly Vivchar from Tomsk (Siberia) is the new underwater bench press world record holder after repping out an impressive 76 reps with 50kg/110lbs. This feat surpassed that of the previous world record holder, American Greg Wittstock from the United States, who completed 62 reps in 2019.

Now, some of you might be thinking that 110 lbs is “light weight” but 76 reps while holding your breath requires lots of practice and skill.

Vivchar was motivated to try and break the record after learning about it. Plus, being an amateur diver, and having won bench press competitions, it made perfect sense for him to combine the two.

The video was in Russian since that’s his native language but essentially, he believed that if someone else could do it, well, he has the experience to give it a shot too,

“So I thought I had enough skills to do it myself: I have experience winning bench press competitions. Also, I am an amateur diver. So I applied to set a new record.”

He started training two months ago before attempting the feat on August 13th at Lake Lebiazhie near Tomsk.

Vivchar also mentioned that he was worried because of the condition of the water due to bad weather and his nerves were really getting to him before the attempt which is completely understandable.

“I was really worried because the water became cold and muddy due to bad weather,” he explained. “I was also very nervous before my presentation. My pulse was over 108 beats per minute! It took a long time to calm down.”

Before the world record is official, he must submit the proper documents of which he’s currently in the process of doing.