Rob Kearney has upgraded his gym with the best stuff available and thus made a tour for his fans. 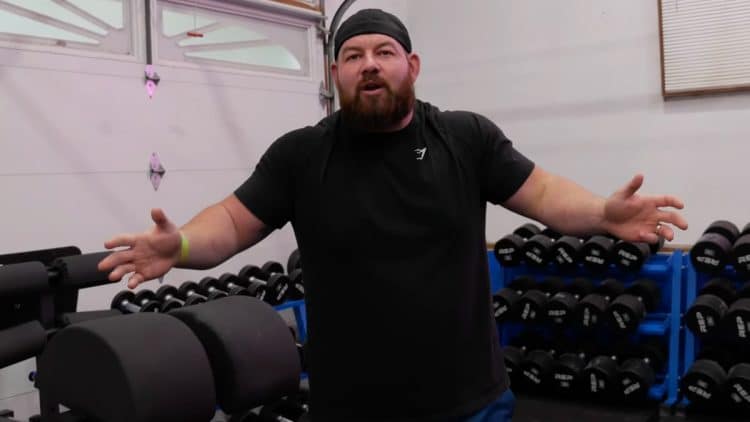 There is something special about every gym that makes it stand out from the rest and makes it different from others. In most cases, there is a separate section for each sport due to its special needs. However, one of the greatest Strongman athletes, Rob Kearney, has developed a gym which offers something for everyone. While Rob has everything he needs for Strongman, he also ensured that his spouse can enjoy the gym as well.

Kearney has worked hard to make his dream goal come true. Thus, it was completed exactly as he requested. Kearney posted a video tour of the gym on his YouTube channel and explained why certain things are the way they are.

Rob Kearney began his gym tour by showing off his custom weight plates, which are covered by what seems to be colorful tiger stripes. He then moved on to the cardio section, which contained an Assault Bike, a rowing machine, and a curved treadmill. Seeing that Rob grew interest in CrossFit recently, these can prove to be very useful to him.

“I actually love the Assault Bike, it is great for conditioning… Even this bad boy (Curved Treadmill) is not bad to jog on. I don’t really run, only with weight on my back, so jogging is okay.”

Right next to his cardio section, Rob Kearney put on display one of the most amazing dumbbell collections ever seen. He has all the dumbbells ranging from 5 pounds to 150 pounds in 5-pound increments.

“These are just amazing to have. I think this is like the one thing people usually get most jealous of when they walk in.”

Rob Kearney also implemented a ‘Hydration Station”, which are basically two mini-fridges, one filled with water and the other one with energy drinks.

One corner of Rob Kearney’s gym is home to an adjustable squat rack, which also has a few pull-up bars holding it together. Just under that are all of Rob Kearney’s Strongman equipment pieces. These consist of a Log, a Yoke, Farmer’s Carry implements, some unfilled sandbags, and a few accessories.

Coming up next in the video was Rob Kearney’s greatest piece of equipment in the entire gym, the PR 5000. He spent two days building it up and struggled quite a bit. However, the end product made it all worth it, as he can now perform a variety of cable exercises, alongside having a few more uses for it. For example, Rob used it to perform rack pulls in preparation for the 2022 Rogue Invitational.

Rob Kearney also possesses a collection of barbells, each one of which serves a different purpose. The remaining parts of the equipment are home to his collection of kettlebells and a few wooden boxes.

Finally, Rob Kearney explained that his main wall won’t remain plain white without anything on it, as he will make sure to frame up all t-shirts from his appearances at World’s Strongest Man competitions.

Strongman is a sport which Rob Kearney has been practicing professionally for seven years, so his longevity speaks volumes. He has taken part in 22 international competitions and managed to win two. Those were the 2019 Arnold Australia and 2017 Giants Live North American Open. In addition, Rob has made four appearances at the WSM.

Despite a few major setbacks in the past few years, like testicular cancer and a triceps tear, Rob Kearney is still pushing hard. He now has a perfect training space to continue improving on his already incredible fitness abilities, with his first challenge being the 2022 Rogue Invitational. This competition will take place on October 28-30, 2022, at the Dell Diamond Stadium in Austin, TX.