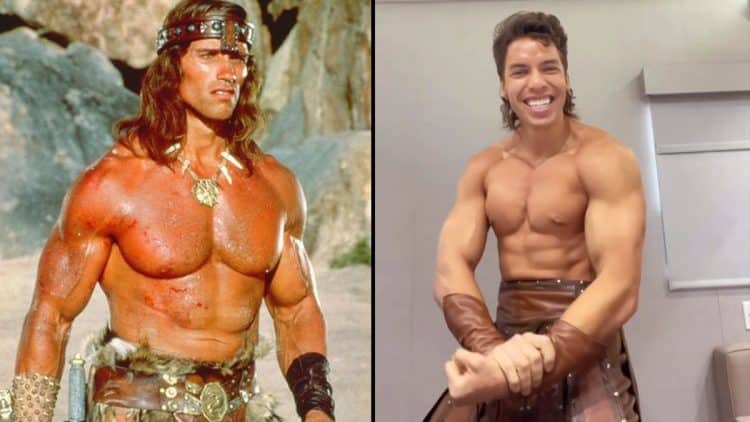 Bodybuilding legend Arnold Schwarzenegger is widely regarded as one of the most successful athletes of all time. His son, Joseph Baena, has also been establishing his own name in the entertainment industry. In a recent post made on Instagram, Baena recreated his father’s iconic look from the 1982 action movie Conan The Barbarian.

Baena gained popularity for his uncanny resemblance to his father. He mirrored the seven-time Mr. Olympia’s signature bodybuilding poses, leaving the fans in awe of how much he looked like a younger version of Schwarzenegger.

Being the son of Arnold comes with its own pressures. Although “The Austrian Oak” never pushed Baena to follow in his footsteps, Baena developed his passion for fitness naturally. Joseph talked about how it was difficult for him to ‘live up to the expectation’ of being Arnold’s son. While he admitted he had difficulties with the comparison earlier in his life, Baena is now confident in his own journey.

Baena discovered a passion for acting in addition to his fitness ventures. He recently gave a look into the grueling shoulder workout he used to get ready for the premiere of season 31 of the competition television series Dancing With The Stars.

He also likes to collaborate with other celebrities and influencers for training sessions. Bodybuilding veterans Mike O’Hearn and Robby Robinson joined forces with Baena to help him sharpen his posing skills. Robinson mentored him in a side pose.

In a recent clip uploaded on his Instagram, Baena performed a series of poses, flexing his muscles in a leather kilt to recreate the iconic look of Arnold Schwarzenegger from the 1982 film, Conan The Barbarian.

“I had a little too much fun in tonight’s costume.” Baena wrote.

Joseph Baena can be seen rocking out to a song from the iconic movie in his dressing room before taking to the stage for his latest TV project.

Baena has been collaborating frequently with O’Hearn. In August, the two partnered up again for an old-school back workout focused on improving longevity. O’Hearn inspired Baena with a workout that would keep him ‘lifting at 75.’

O’Hearn and Baena also got through a demanding arms workout together, revealing their go-to techniques for building sleeve-busting arms. Judging by Baena’s recent post, he still bears a striking resemblance to his father.