Round 1: What Is The Best Fat Loss Method? 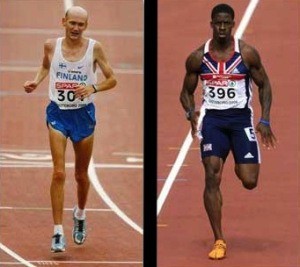 What is the best method to lose fat and why, HIIT or steady state?

Colin: I’m a big believer in HIIT being superior for fat loss over steady state. Mostly because of the greater excessive post-exercise oxygen consumption you get with HIIT. What really convinced me, however, was when I heard Layne Norton talking about a study (and confirmed) that showed two groups, one doing 6 – 30 second sprints and the other group doing an hour of steady state cardio. The study showed that the sprint group burned twice as much body fat as the steady state group. It’s pretty hard for me to argue with results like that.

Matt: I’m going to say that it depends on how your life is structured as well as the body fat levels you are trying to achieve. If your life is conducive to doing a lot of walking, then I don’t think much else needs to be done as far as fat loss is concerned. Just let the caloric deficit do the work and let the walking do the rest.

All things being equal though, HIIT definitely works and works very well, I’m not going to disagree with that. If I just were to answer the question with no explanation, then HIIT will use more fat than steady state if you look at the results between two test subjects of average body fat levels.

It does require a gym though and it also requires an intense bout of training which can be very taxing when dieting. My point being that if you can get away with walking to work and back then why add anything else in.

From a personal standpoint, I’ve been able to achieve a very athletic level of conditioning with HIIT, but when it comes to getting to lower single digits, I’ve always needed LISS to get there. When it comes to pure fat loss, nothing works better than steady state.

JC: I have utilized both for contest preparation. With very little changing in diet, and still keep the same range for my deficit, I have managed to repeatedly come in leaner when incorporating HIIT. At the direction of a trainer, I performed LISS (fasted) every day upon waking, and again post workout, for a total of 60 minutes per day. I did get lean, but there is speculation as to whether it was the aid of the cardio or a poorly constructed diet. My current prep routine calls for HIIT cardio for only twenty minutes and only two times per week. Not only do I come is shredded, but I look, feel, and present bigger.

Keep in mind, HIIT utilizes fast twitch muscle fibers which are associated with more intense workout styles like lifting. Slow twitch muscle fibers are more for endurance. Activating the fast twitch fibers through changes exertion levels requires much more energy than maintaining a steady pace. This creates the potential for growth through cardio. Studies have repeatedly shown HIIT to be a more productive fat burning technique. Although the exercise period is shorter and may result in fewer calories burned in the session, the effect it has on the metabolism is to keep it humming for up to twenty-four hours post workout.  A simple addition of three HIIT sessions in a week, for a total of 60 minutes workout time, will essentially  have the same impact as a week’s worth of running at 60 minutes each.

Dara: So far I agree with everyone. It depends on your goals, but usually HIIT is best for fat loss, not only for the reasons already stated, but also due to the metabolic adaptations our body undergoes via steady state vs HIIT cardio. The only way our body changes is through adapting to a stimulus. When that stimulus is long distance steady state cardio that primarily uses fat for fuel, the body upregulates the receptors responsible for fat storage in order to make you a more efficient fat burner. That’s not good if you want to lose body fat. We want to be inefficient (ie; creating a large EPOC) if the goal is fat loss. Let’s think like our bodies for a second.  If you want to be able to do steady state cardio for a long period of time and to do this you need fat for fuel and you also want to be lighter so you have to do less work to move your own body, which tissue will you keep around and which would you want to get rid of? Muscle is heavy and this isn’t conducive to efficient endurance training. So to adapt to steady state cardio our body will actually lose muscle to get lighter and keep the body fat around because it needs it for fuel.

Take a look at the body of a long distance marathon runner. As much as I think that running a marathon is an impressive feat and I’m not trying to take away from that at all, the really good runners are really skinny and a little flabby because they haven’t got much muscle. See this picture comparison of a marathon runner and a sprinter.

Likewise, the body will adapt to HIIT as well. Unlike steady state though, because HIIT is largely anaerobic and requires carbs for fuel, the body will upregulate the receptors responsible for glycogen storage in order to have more fuel in the tank for this type of workout. Another upside of increased glycogen storage is that the body will recognize this as a source of energy and allow you to burn off “unneeded” body fat.