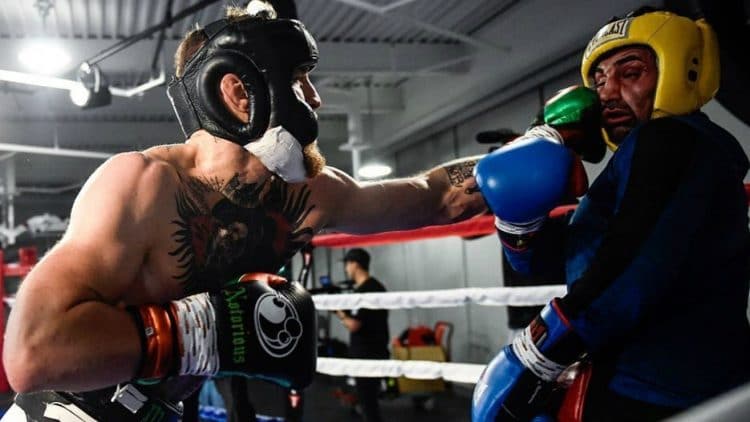 Former boxing champ Paulie Malignaggi has attacked Conor McGregor again in a series of tweets after walking out on the Irishman’s training camp last week.

After spending more than a week training with McGregor in Las Vegas ahead of his Aug. 26 match with Floyd Mayweather, Malignaggi announced his was leaving the camp after a series of unflattering sparring photos found their way online. One photo, in particular, showed Malignaggi downed on the canvas – but he insists it was from a “push down,” not a knockdown.

Nevertheless, Malignaggi is not happy with how he was “exploited” by the McGregor camp, and he’s firing back hard. Malignaggi said he’s going to reveal additional details about sparring McGregor in the near future, but he’s already sharing some via Twitter:

Yea but this coming week I'll actually start to discuss a bit what happened Tuesday, he whimpers like a girl when he gets ripped to body lol https://t.co/lfcuILlubJ

The non disclosure is void dipshit I never got paid lol https://t.co/Ux8QCUf4OV

Yes I will give tactical analysis and breakdown on fight night and not before. Detailing events and detailing Tactics are 2 diff things. https://t.co/Ys4nKO8WHn

Watch how he rolls over n gives his back then doesn't protect his neck, he wanted 2 be choked out so he could tap n end the misery #NoBalls https://t.co/GhlCTb7K2J

Paulie Malignaggi said he was not intending to reveal all about the camp before the $500million bout in Las Vegas, the McGregor camp may now be worried he will reveal information from their training before the fight.

“I won’t speak tactics of his, that I wouldn’t do, I still have some ethics, I’m not Conor, but definitely will give the story straight about stuff.”

Malignaggi previously released a long statement after quitting the camp after two days, confirming his decision and saying he ‘wished team McGregor well.’