The six-foot teenage American footballer Tyler Parker can deadlift 188-kilograms (414.4-pounds), and his strength has grabbed the attention of many top institutions in academia. 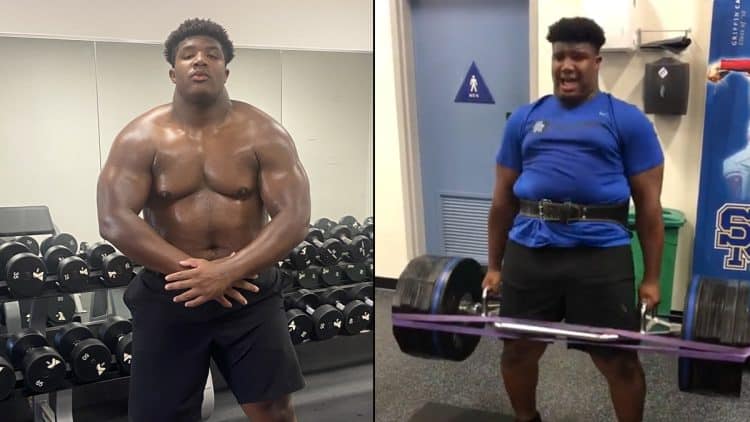 Footballer Tyler Parker, a Santa Margarita High School student, is generating a lot of excitement after going viral on social media for his strength. Parker is 300-pounds, capable of pulling his own bodyweight, and has received numerous offers from colleges despite only being 14 years of age.

According to Parker’s Hudl page, the sophomore can bench press a staggering 136-kilogram (299.9-pounds). In addition, Parker has recorded an impressive 188-kilogram (414.6-pounds) deadlift. With aspirations of one day making it to the NFL, Parker is committed to fitness, football, and striving to be the best athlete at his high school.

Agility and explosive strength are paramount in a sport as fast-paced and intense as football. Parker understands this and has worked diligently to produce a jaw-dropping 4.9 second, 40-yard dash, which makes him remarkably fast given his burly 300-pound build.

Showing off his strength in a recent Twitter video, Tyler Parker smoked a massive deadlift.

Despite his young age, Parker is determined to improve and ultimately become a more effective player on the field. He has garnered attention from a number of prestigious college universities. CEO of the International Recruiting Placement Platform for American Football Players, Brandon Collier, is one of the latest to acknowledge Parker and his above-average athletic prowess.

“[Parker] can be the number one DT (defensive tackle) in the class of 2025″.” Collier explained.

Parker has received offers from The Arizona Wildcats, Portland State, Incarnate Word, and Virginia University of Lynchberg along with the University of Mississippi, Texas A&M and Louisiana State University. The gifted 14-year-old has also piqued the interest of Ryan Vidales, a former recruiter for the University of Oregon.

“Tyler Parker is a name that we’ll be talking about for years to come.” Vidales exclaimed. “I can’t remember a kid coming out of Orange County with his combination of size, speed, and athleticism at 14 YEARS OLD. “Can’t wait to catch a game at Santa Margarita this upcoming season!”

With his size and speed, there aren’t many athletes in high school that can contend with Parker on the field. He is even getting props from NFL stars like Baltimore Ravens’ Calais Campbell.

Tyler Parker is getting attention from NFL stars like @CalaisCampbell 👀🔥 pic.twitter.com/WaEtXXnpTj

When Parker’ isn’t tackling someone to the ground, the high schooler likes to push himself during training sessions. As of late, Parker demonstrated a series of pull-ups for reps.

“Not too many 300lb 14 YEAR OLD people walking this earth can pull there body weight up for reps..” Tyler Parker wrote on Twitter.

Not too many 300lb 14 YEAR OLD people walking this earth can pull there body weight up for reps.. @PPIRecruits @BCollierPPI pic.twitter.com/QV26H5KYQ8

Parker isn’t the only 14-year-old grabbing headlines for his feats of strength. Powerlifting teen Morgan Nicholls has been described by his coach as a ‘rare breed’. He shared a bench press of 184-kilogram (405-pounds) back in January. Even at 13 years of age, Nicholls demonstrated freaky strength. In 2020, the 13-year-old hit a massive 445-pound deadlift and a 335-pound bench press.

Sophomore student Parker approaches his schoolwork like athletics, and registered a 3.36 grade point average, according to his Twitter page. He is one of the hottest commodities in high school football no doubt and plans to keep tackling his way to the top in the years to come. While Parker has yet to reveal his next move, he appears to have a bright future in the sport.