Men's Open bodybuilders Regan Grimes and Samson Dauda are looking absolutely massive in the off-season as preparations start to heat up. 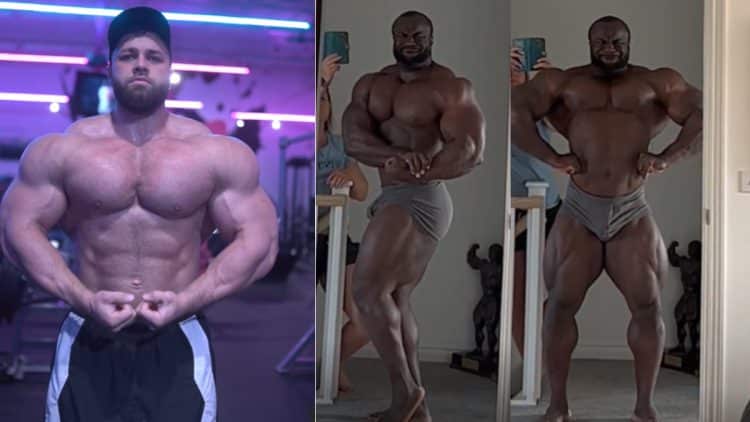 Bodybuilders Regan Grimes and Samson Dauda plan to bring new and improved packages to the stage later this year. Grimes revealed that he is currently weighing 295-pounds, while Samson Dauda announced that he’s tipping the scales at 320-pounds, 24 weeks from 2022 Mr. Olympia.

Home to some of the freakiest mass monsters in the world, the Men’s Open division has become incredibly popular. Rising star Regan Grimes is partly responsible for the division’s latest boom. In 2018, the Canadian won his first bodybuilding event, where he took first place at the New York Pro. He entered Olympia that same year, placing eighth on his first attempt.

Grimes scored a pair of runner-up performances in 2019 before vowing to improve his physique for the next season. Competing at a handful of shows the following year, Grimes’ best finishes were placing second at the 2020 British Grand Prix and winning gold at the Romania Muscle Fest Pro. While he tried his hand at 2020 Olympia, Regan was outmatched and walked away in 15th place.

Despite improvements to his conditioning, Grimes placed in 15th once again at 2021 Olympia after a runner-up showing at the Legion Sports Fest Pro last October. Regan earned his invitation to the 2022 Olympia by winning the KO Pro Bodybuilding Show in Egypt last year.

Following back-to-back seventh-place finishes at the 2022 Arnold Classic and Boston Pro, Grimes went into shadow mode, eager to remind everyone of why he garnered so much hype at the start of his bodybuilding journey.

One opponent that got in the way of Grimes’ success this past year was Samson Dauda. Establishing himself as a notable threat, Dauda made waves as a Men’s Open standout in 2021. Last year, Samson competed at two shows and reached the podium twice. At his first event of the year, Dauda took second place at the 2021 Arnold Classic UK, behind champion Nathan De Asha and turned in a third-place showing at the Yamamoto Cup Pro.

The bodybuilder has proven to be extremely dangerous any time he steps on stage. When his conditioning is dialed in, his size and overall look will surely give top names in the division some trouble. Dauda won his first show last year at the 2021 EVLS Prague Pro and earned his invitation to compete at 2022 Olympia.

Before deciding to pack on more muscle mass, Dauda competed against some of the sport’s best at the 2022 Arnold Classic, a show that saw him reach fourth place. His last competition resulted in another fourth-place finish at the Boston Pro back in March.

In a pair of recent physique updates, Men’s Open competitors Regan Grimes and Samson Dauda gave fans a teaser of the gains they’ve made thus far while training under “The Mind” Milos Sarcev. Grimes revealed his weight of 295-pounds.

“Starting to look like a bodybuilder” Regan Grimes wrote.

After being relatively quiet on social media, Dauda posted an update and said his off-season weight is hovering at a gargantuan 320-pounds. His update is even more impressive considering the detailed separation his lower body displayed.

“Sneak peek at 320lbs this off season” Samson Dauda wrote on Instagram.

These are definitely promising updates from both competitors, who will undoubtedly have their hands full when they take to the Olympia stage later this year. Reigning two-time Mr. Olympia Mamdouh ‘Big Ramy’ Elssbiay plans to go for his third title. However, former Mr. Olympia and 2022 Arnold Classic champion Brandon Curry admitted that his plan is to gain size to combat Ramy’s best weapon this winter.

In addition to Grimes and Dauda, 2021 Olympia People’s Choice Award winner Hadi Choopan will look to catch some of his opponents off guard. The lineup for this year’s Olympia show is stacked with talent, as fourth-place finisher Hunter Labrada returns as well as 2021 Arnold Classic champion Nick Walker, who managed to place fifth in his debut at the show last year.

There are 24 weeks until 2022 Olympia and it seems most competitors are playing the size game, with hopes of knocking off Big Ramy when it’s time to stand on stage. Judging by their recent physique updates, Grimes and Dauda are in the process of building their best packages yet.