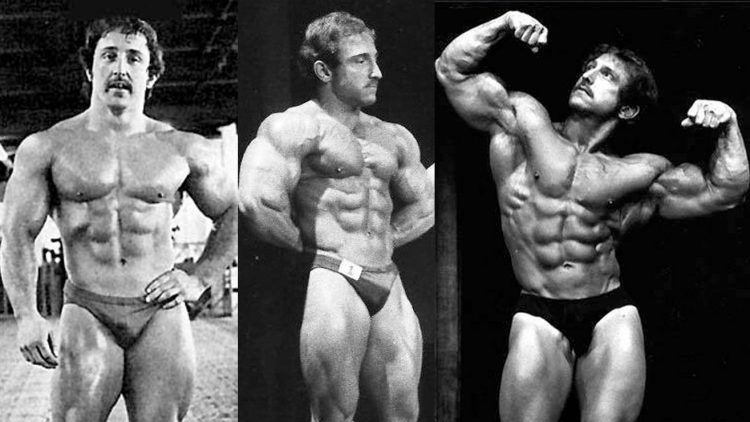 At a young age, Dave Mastorakis set his sights on bodybuilding. At 14 he met and was trained by Ed Jubinville. Ed was a bodybuilder, weight lifter, promoter, and most notably, a muscle control artist.

Ed put young Dave on a basic barbell program of 3 sets per exercise with the third being a set to failure. This was a full body classic bodybuilding program which many of the early Mr Americas had performed.

Dave trained at his home and on weekends went to the health club where Jubinville could supervise him. It worked well for Dave and he built a great foundation.

In fact, it worked so well that a 15 year old Dave Mastorakis was invited to enter the 1965 IFBB Mr America contest! Although he did not win, he is still the youngest competitor to ever grace the Mr America stage.

Impressed with Dave’s appearance at the Mr America, Mike Mentzer wrote to Dave which eventually led to the two becoming best friends.

Mike Mentzer Young, Dave Mastorakis Mike also wrote a letter to the great Mr America, John Grimeck, who was the editor of Muscular Development at the time. Mentzer told Grimeck of a young Dave Mastorakis and how impressive he was. This led to an article written about Dave in Muscular Development magazine by Grimick called the “Teen Age Hercules”.
Mastorakis’ was entering local contests and in 1966 won his first of many bodybuilding trophies taking third in the Mr. New England.

For a few years Dave stopped serious competition training. He felt that to continue progressing into bigger competitions he would have to move to California and train 2 hours per day as the magazines were suggesting. Not willing to do that, Dave suspended his competitive career.

Hit training, nautilus routines In 1971, after placing 10th in the Mr. America, Mike Mentzer contacted Dave and told him of meeting Casey Viator. 19 year old Viator had had won the contest as the youngest Mr. America ever. Casey had told Mike about the high intensity training he was doing under Arthur Jones‘ supervision. Hearing about this new short but intense bodybuilding workout, Dave once again began serious training.
The new HIT training worked well for Dave right off the bat. He began gaining 4-8 lbs of muscle per year and started entering bodybuilding contests again.

Dave Mastorakis was making a name for himself in the sport placing high in numberous contests. Dave took the overall AAU Mr. Atlantic Coast in 1974 and 1st in the short class of the 1978 Jr. Mr America.

…in my opinion my greatest (to me/ very personal) event was after competing in the Mr. East Coast for six years I won my class plus the over-all title beating over 78 competitors. It was in front of all my family and friends at the famous Mt. Park.

Dave’s workouts centered around nautilus machines and he became known as the “mechanized champion”. While other high intensity trainers strayed from the original nautilus program Dave continued to get great results from it.

Around this time Dave began a personal training business in California. Most gym facilities at the time had staff trainers. These were general instructors which gave the new trainee an overview of the equipment and routines but did not offer one on one services.

Mastorakis, however, found a niche market of people wanting that one on one experience of a supervised workout.

Dave’s new approach of supervised training launched a flourishing career for himself as his competitive bodybuilding days were winding down. Soon he was a full time personal trainer and overseeing other trainers at three facilities.

Dave later went off on his own. At an upscale gym he trained Hollywood stars as well as other celebrities of the day.

More and more people began personal training and by the late 90’s the market in California was flooded. Dave moved back to Massachusetts where he lives today.

I have been doing a lot of single side exercises. I have written with this style in mind. It allows you to do extra reps or to do one drop set assuming the stack is close by. If you are using hammer(strength) …………never mind!! But you should still be able to do two or three additional reps after normal failure.

You should not do additional reps for every set every time. I would pick about 6 sets to do the extras and rotate them each session. The “A” workout has 13 sets. They are listed in my favorite fatigue order.

I have legs listed in the “B” workout to give your triceps a break in between pressing and one of my old favorites, close-grip pushups to failure. Here it is:

Note: This workout produced great results. The tricky part is finding equipment that allows for single arm movements. Hammer Strength machines allowed me to perform Dave’s routine as outlined above. I did not use forced reps, but did use some negatives here and there. It is one of my personal favorites now.

While continuing his personal training business, Mastorakis began entering natural bodybuilding competitions in 1998. Currently Dave is training for Masters natural competitions and had an article written about his training in Iron Man magazine.

Dave Mastorakis continues to run a successful training business and can be contacted at (413)289-1556 or via his website for information on personal training with Dave himself.