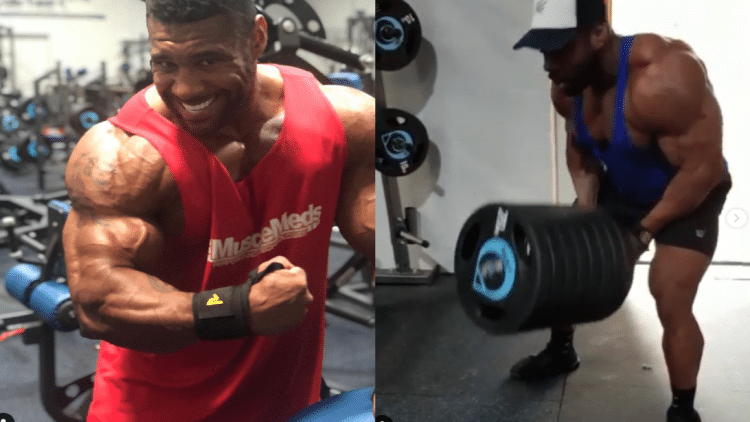 The 2019 Mr. Olympia competition will be huge, as it will be crowning a new champion. This is something that Nathan De Asha is looking to capitalize on.

De Asha has already been making it clear to his opposition how hard he is working, leading up to this year’s competition. He is on the shortlist of favorites to capture this year’s Mr. Olympia title, now that last year’s champion will not be competing. With that said, “The Prophecy” is not wasting any moment to try to earn his spot.

De Asha has been dealing with a nasty eye infection that would sideline many people. However, he has not let that keep him from training hard and staying in the gym.

Recently, he posted this picture of him posing after a workout, and it is clear just how much time he has put in the gym.

“Little posing with the boys as you do after a back season, well every session now. Count down to the big dance @mrolympiallc is getting closer. Make sure you guys are there. This year will be a turning of the tide as they say.”

Nathan De Asha is looking simply incredible. His physique is in top-notch condition, and he seems more than ready for the competition. However, it is still three and a half weeks away, so that means that the work is far from over. De Asha also shared these three videos, detailing how much work he is putting in on his back.

“Attack the back in every way possible. Determined to make this Bitch grow no matter what.”

Don’t be fooled though, he is working on more than just his back.

De Asha is trying to be as well rounded as possible, for the 2019 Mr. Olympia. He has to be, as that is what it will take to set himself apart from the others like Dexter Jackson or William Bonac. So in addition to the back work, he posted a pair of videos working on his arms and shoulders.

“Hard at work at @prophecyperformancecentre ( my gym 😂🤣 ) grinding away till the big dance. While others sit at there keyboard dream and hate on others.
Why not promote shine light on others rather than be jealous and hate.
Jealousy is a killer 🤣😂”

Do you think Nathan De Asha has a shot to win 2019, Mr. Olympia? Which athletes are you favoring in the massive competition?