See who made it to Sunday's final showdown after day 3 of the Atlas Stone event! 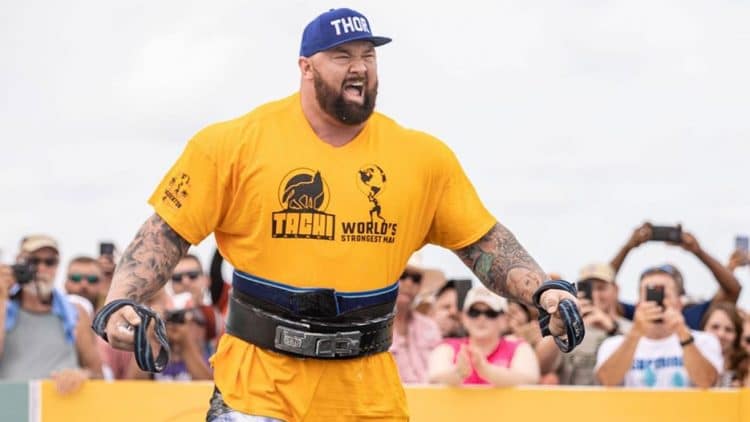 We’re just a day away from the World’s Strongest Man final after three days of qualifying events. The first day was the Monster Truck Pull and the farmer’s walk/yoke medley. Day 2 events were the deadlift and overhead press for reps.

And after day 3 of the “Last Man Standing” event where athletes had to lift an Atlas stone until exhaustion, we now have the men advancing to the finals (Sunday, June 16).

But, day 3 was the last qualifier and this time the second and third place finishers after the first two days of events had to compete for spots.

Adama Bishop beat Robert Oberst after the latter was unable to complete a second lift and apparently injured his bicep during the lift.

Stoltman lifted the stone an impressive nine times but Smaukstelis failed to get his ninth rep after two attempts.

After a failed first attempt from Kevin Faires, he was replaced by Martin Kristiansen (Fourth place finisher). But Caron walked away the victor after an incomplete fifth rep by Kristiansen.

After an intense battle and the best performances in the event, Mitchell made number fourteen but it proved to be too much for Novikov who couldn’t complete his fourteenth rep. The crowd was chanting U-S-A! and Mitchell pulled through to get the win.

So, now, the winners from the “Last Man Standing” Atlas stone event will join the athletes who already qualified for the final.

This year’s World’s Strongest Man final is going to be incredible and we can’t wait to see who will be crowned. Although Hafthor Bjornsson won in 2018, his small injury won’t allow him to compete at 100%.

But we know last year’s podium finishers Mateusz Kieliszkowski, and Brian Shaw will be bringing the heat, and anyone else could surprise us.