Tyson Fury Had No Hard Time Against Undefeated Tom Schwarz, Finished Him Via Second-Round TKO! 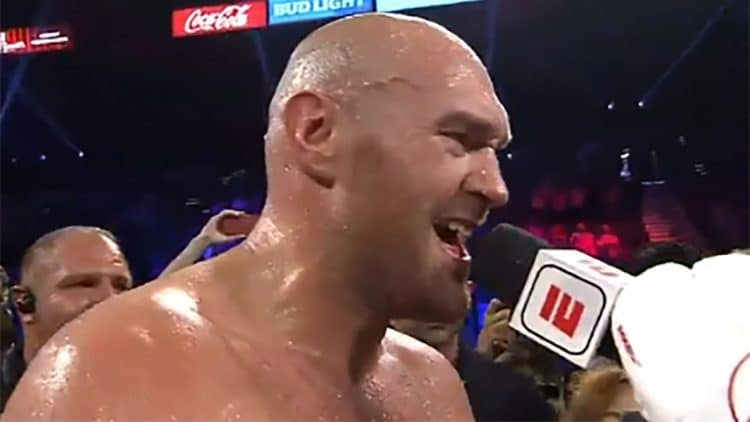 Tyson Fury and Tom Schwarz were very cautious in the first frame. Fury attempted a lot of jabs to the body and head, while Schwarz landed one solid right hand, and pressed his opponent the most of the round. Fury landed more clean shots.

But Fury turned the lights out on his opponent in the second frame. As soon as it started, he switched to southpaw to confuse his opponent and wobbled him with a strong right uppercut. Yet, Tyson didn’t end the job here.

German was shaken after a left hook, and his nose was bleeding. Then Tom Schwarz went for all or nothing, chased his rival, and even pressed him against the ropes. Fury escaped the barrage of strikes and rocked his rival with an outstanding punch combo to the head. Fury was landing shots over and over, while the German stood covered in the corner, and the referee stopped the fight.

Check out the most notable moments:

There's only one @tyson_fury!

Fury comes out with a tribute to Apollo Creed #FurySchwarz on @espn+ pic.twitter.com/fliRZ27LEt

Tyson Fury is the best Heavyweight Boxer in the world right now… and he proved it tonight with this KO 🥊 🇬🇧 #FurySchwarz pic.twitter.com/MkFqnYCNhC

Fury has some other talents too.

There is absolutely nobody like him. The most entertaining man in sports @tyson_fury #FurySchwarz 😂🎶 pic.twitter.com/2gkKuVE3uL

The 7 Best BCAA Supplements For Women

You are not alone if you thought we were referring to a furious Mike Tyson in the headline. Actually, there...