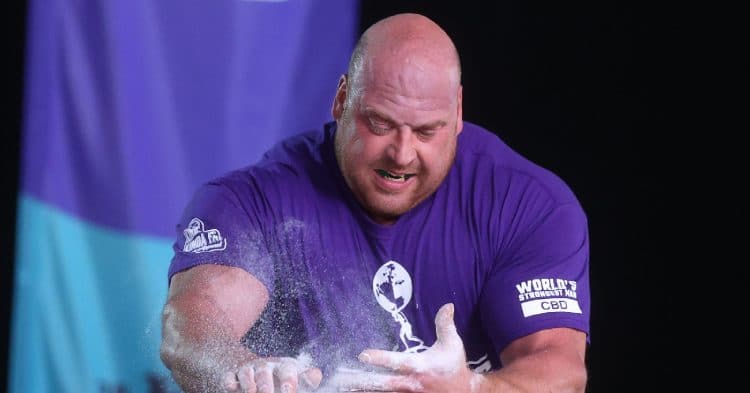 After a bit of a delay, the 2020 World’s Strongest Man finally kicked off today, with the first set of qualifier events. This is how things transpired in Bradenton, Florida as the strongman athletes kicked off the contest.

Then WSM is a contest that is always filled with exciting strongman action. However this year saw the athletes fixed to overcome a plethora of uncommon and difficult challenges to get to this point. Even when the athletes touched down in Florida they were faced with more problems, as poor weather conditions led to a delay in the first day of the contest, even forcing the events to take place indoors.

The 2020 World’s Strongest Man is broken down into four days of competition; 2 days of qualifiers and 2 days of finals. The first qualifier kicked off today with the 25 strongman competing in their five groups. Here is how the events shake out for the first day of competition:

Kicking off the contest was the first group of athletes, completing the Farmer’s Carry. It was Jerry Pritchett who crushed this event for this group, going for an impressive distance of 52m. Robert Oberst and Luke Richardson would take second and third place respectively, with Robert going 38.87m and Luke going 20.13m.

The deadlifts saw Pritchett again finding success, leading the pack with 9 reps. Behind him was Mexico’s Gabriel Peña, clocking in at 8 reps. Bringing up third place is Like Richardson, who managed to pull 7 reps.

In Group Two things were quite close, as Evan Singleton and Kevin Faires were neck-and-neck. In the end WSM newcomer Singleton would win with a distance of 52.25m, compared to Faires’s 52m. Mark Felix would take third place at 42.67m.

When it came to the deadlifts, Group Two was again closely contested. There was a close, three-way tie at the top, with Adam Bishop, Mikhail Shivlyakov, and Mark Felix all hitting 9 reps. This left each man earning 4 points.

In the third group of athletes to compete at the World’s Strongest Man qualifiers, Oleksii Novikov won with a whopping 57.54m. This was the best performance for the day on this event. Maxime Boudreault would come up in second place with a 46.34m carry, while Tom Stoltman closed out in third place with 42.78m.

Group Three was the first group to do squats as their qualifiers. Trey Mitchell was first here, with 11 reps. Novikov was able to secure his lead in the group with a second place win with 10 reps. Coming in third place again was Tom Stoltman, with 8 reps.

In the fourth group of World’s Strongest Man contestants, JF Caron did not disappoint with a strong 48.2m carry. This was followed closely by Bobby Thompson, who went 45.59m. The rest of the group would fall short in this event, as Ervin Toots scored third with just 18.76m.

When it came to the squats, JF Caron and Bobby Thompson would tie with 11 reps each. This leaves them each with 4.5 points each. Then in third place came Graham Hicks, who got 10 reps.

All eyes were on group five, as it has the favorite to win the World’s Strongest Man, Brian Shaw competing. He would come second here, with his 40.10m being nothing compared to Terry Hollands’s 52m carry. Aivars Smaukstelis would land third place with 36.56m.

In terms of deadlifts, Terry Hollands continued to dominate the day, pulling 6 reps. This amount was matched by Shaw, giving them both 4.5 points. Third place was also a tie, with Luke Stoltman and Aivars Smaukstelis each scoring five reps and scoring 2.5 points.

Stay tuned to FitnessVolt for daily updates of the 2020 World’s Strongest Man.