During the 2022 Amateur Olympia in Italy, Krizo was the overall winner earning him his IFBB Pro card and potentially qualifying for 2022 Olympia quickly. 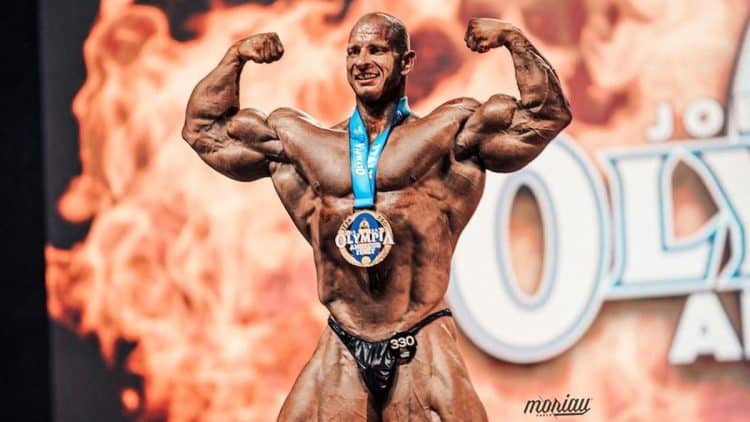 Bodybuilder Michal Krizo has been touted as one of the most exciting prospects. It was his aim to make a statement at today’s 2022 Amateur Olympia Italy and he did just that as he won the competition and earned his pro card.

The 32-year-old had switched over to the NPC from the IFBB Elite Pro League a few months ago. Fans were convinced it was only a matter of time before Krizo would stand next to some of the freakiest mass monsters as a Men’s Open competitor in the IFBB Pro League.

Krizo made headlines after he teamed up with decorated bodybuilding coach Milos Sarcev, for a high-volume back workout session months before the show. ‘The Mind’ was left stunned by his first impression of the rising prospect. Sarcev believes Krizo will pose a serious threat if he improved his back and sees him as a future top Olympia contender.

Legendary bodybuilder Jay Cutler agreed with Sarcev after meeting Krizo and predicted that the Slovakian athlete will be very ‘dangerous’ if and when he makes it to the 2022 Olympia stage. The four-time Mr. Olympia drew similarities between Krizo and seven-time Olympia winner Phil Heath, both of whom had muscle fibers that are rare nowadays.

Michal Krizo made his much-anticipated debut at the NPC, where he was eyeing to earn his Pro card. Being a professional veteran, Krizo did not face as intense of competition as he was used to. He outmuscled every single competitor on stage with his immense size. He won the overall show and also won the super heavyweight class.

Krizo previously lost to fellow Men’s Open division standout Blessing Awodibu in 2017 at an amateur bodybuilding contest. Blessing recently re-ignited their rivalry with a throwback photo of the show he defeated Krizo. According to Michal, the more experienced bodybuilder at the time was Blessing. He argued that he was a rookie at the time and still made Blessing ’sh*t’ his pants.

Although Krizo looked full, his conditioning was brought into question. Many believe Krizo did just enough to win the show and did not bring his best package.

However, Michal Krizo’s primary focus is the Mr. Olympia competition. With the knowledge that he would probably win the NPC competition easily, it can only be assumed that his physique is still in the process of being prepped – and his focus is now on the EVLS Prague or simply Mr. Olympia.

Two weeks ago, Krizo shared a biceps-focused arm workout routine that he utilized in preparations for the 2022 Amateur Olympia Italy. He gave an insight into the diet and supplement stack that won him the show, including his full day of eating, which consisted of ‘six big meals,’ made of mostly rice porridge.

Now that he has his Pro card, Krizo could be targeting a quick turnaround to compete at the next pro show, the upcoming EVLS Prague Pro, where he could have the chance to prove that he’s ready for the 2022 Olympia stage.

Tea and Intermittent Fasting: Can You Drink Tea While Fasting?

Legendary bodybuilder Jay Cutler is one of the most respected figures in the sport. He may have moved on from...