Andrea Thompson announced her plan only a few days ago and has now successfully carried it out. 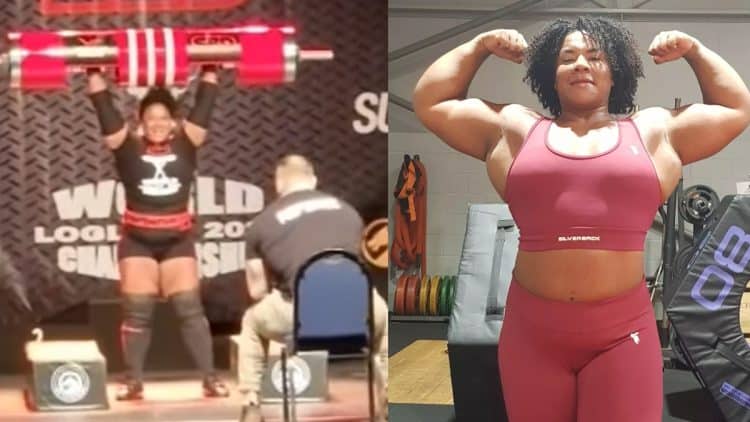 Andrea Thompson recently visited her coach Laurence “Big Loz” Shahlaei for some in person training sessions. They completed multiple sessions together and even shared some to YouTube, during which Andrea revealed that she was going to attempt to break the Log Lift World Record. She even went a bit further and revealed that she wanted to move the record mark by an additional 5 kilograms (11 pounds). The plan worked flawlessly for Andrea Thompson as she lifted a 140-kilogram (308.6-pound) Log for a new World Record.

Andrea Thompson went to Ipswich, UK, on October 9th in order to compete at the 2022 World Log Lift Championships. She first opened up with two lifts which were not World Records and then successfully locked out 137.5 kilograms (303.1 pounds) on her third attempt to break the record. However, Andrea decided to improve it even further and loaded 140 kilograms (308.6 pounds) for her final attempt. Andrea didn’t go any heavier despite the fact that this weight appeared easy to her.

Andrea Thompson also held the previous record, which stood at 135 kilograms (297.6 pounds). She set that record at the 2020 World’s Ultimate Strongman ‘Feats of Strength’.

In order to add another 5 kilograms (11 pounds) to the old record, Andrea Thompson perfected her technique and put in large amounts of hard work. She also utilized a lifting belt, elbow sleeves, and wrist wraps to prevent an injury.

“Ooof, what a day at the SBD World Log Lift Championships

Watch all the attempts here:

With one of her goals successfully accomplished, Andrea Thompson can now focus on her future. Andrea definitely has something to look forward to, since she announced that she is preparing for the 2022 World’s Strongest Woman (WSW) contest. While the date and location of this competition are still unknown, we know that it will be sometime in December.

Andrea Thompson has already won the World’s Strongest Woman competition in 2018 and claimed a bronze medal at the 2019 WSW. These two podium finishes are probably the highlights of Andrea’s career, alongside the new Log Lift World Record. She plans to expand her list of achievements with another gold medal at the upcoming WSW contest.

Andrea Thompson has also been named as a part of Team UK for the 2022 World’s Strongest Nation competition. It is set to take place on November 26, at the M&S Bank Arena, in Liverpool, England, so we will have to wait and see how that will turn out.

Andrea Thompson is currently looking unstoppable, especially after scoring the incredible 140-kilogram (308.6-pound) Log Lift World Record. Although she has two months to prepare for the 2022 World’s Strongest Woman contest, she must adjust to improve on some other events. This will probably not be a problem, seeing that she is working with Big Loz, who is becoming a very successful coach with numerous Strongman and Strongwoman athletes.