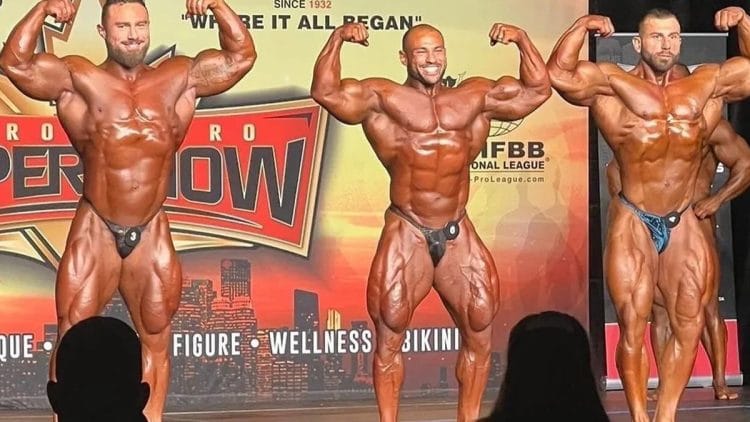 This year’s season of bodybuilding is underway, and many winners walked away from the stage, having earned their invitation to compete at 2022 Olympia later this year. The 2022 Olympia contest will take place from Dec. 16 to Dec. 18, in Las Vegas NV.

As one of the most exciting categories in bodybuilding, many fans were excited to see how Mohamed Shaaban would fare at the show given how close he came to earning a title back at the 2022 California Pro. Shaaban pushed champion Charles Griffen to the brink of defeat, and his overall size nearly closed the show.

Another big name that everyone had circled during the pay-per-view was Andrea Muzi, who has put together an active bodybuilding season in 2022. Muzi attracted a lot of hype courtesy of his performance at the 2022 California Pro, which saw him take fourth place last week. In the end, Mohamed Shaaban won the event, clinching his invitation to compete at 2022 Mr. Olympia later this year.

One name to watch out for leading into the event was Murat Gonal. The 212 competitor’s physique displayed a fine balance between size and conditioning.

It was an intense battle on stage, and the judges put the top three finishers through plenty of poses to determine who stood out with the best look. Despite the sparse lineup of talent in the 212 division, the show delivered a highly competitive affair. Hossein Kalateh walked away as the 212 champion, earning his invitation to compete at 2022 Mr. Olympia this December.

Heading into the event, many fans pegged Kwon Hyoung Joo as a favorite to win the contest. He last competed in 2020, putting forth an impressive performance at the Monsterzym Pro. The Classic Physique competitor ended up placing in third and showed when he comes into a show with his conditioning on point, he can stand against some high-caliber athletes.

In addition to Joo, hype surrounded the return of Tyler Johnson. While Johnson only performed at one IFBB Pro League show last year, he proved to be incredibly dangerous on stage. The bodybuilder earned a fourth-place distinction at the 2021 Hurricane Pro. After being pushed by Joo at this event, Tyler Johnson outmatched him with conditioning and won the Classic Physique title in Toronto.

Heading into the event, Reuben Glass stood out as a clear favorite. He had a very busy season in the IFBB Pro League last year. He competed at a total of four shows, though two events in particular stood out. Glass managed to place fourth at the 2021 Houston Tournament of Champions to kick off his season last year. He gained even more steam after placing fourth at the 2021 Pittsburgh Pro.

Another name fans circled on their calendar was Mehdi Kabbadj. He had a commanding season in the sport last year but gained more notoriety in 2022. He kicked off this year with a fourth place performance at the Optimum Classic Pro and followed it up by placing runner-up at the 2022 Palmetto Classic Pro. Many were hoping to see a battle between Glass and fan-favorite Mehdi Kabbadj, and that’s exactly what happened. Following a close battle on stage, Mehdi Kabbadj walked away victorious, earning his invitation to 2022 Olympia.

Michelle Jin was a name many were watching after she turned in an impressive performance at the 2022 New York Pro a few weeks ago, reaching the podium in third. However, given that Lisa Kudrey took runner-up at this show in 2021, many fans thought this was her chance to steal the title while going toe-to-toe against a tough lineup, and that’s what happened. Lisa Kudrey punched her ticket to compete at 2022 Olympia later this year with a first place performance.

Despite a long layoff, many fans expected to see a statement-making performance from Giorgia Foroni. She had an impressive season in 2018 that saw her perform at three high-level IFBB Pro League shows. The Fitness competitor took second place at the Wings of Strength Chicago Pro and followed that up with a fourth place showing at the 2018 Tampa Pro. She capped off an amazing season by placing ninth at Olympia, respectively.

Stephanie Jones was another big name to watch entering the show. She competed recently at the 2022 Boston pro, and put forth a respectable performance, earning fifth place ultimately. After being pushed on stage, Stephanie Jones won the event thus earning her invitation to compete at 2022 Olympia.

As the contest approached, many expected a lot from Mandy Urner after her two IFBB Pro League shows in 2021. She took to the stage at the 2021 Rising Phoenix Arizona Pro, a competition where she placed 12th. Urner proved that she could deal with adversity months later and earned a fifth place performance at the 2021 Titans Grand Prix. She last competed at the 2022 Pittsburgh Pro, where she placed 16th.

In addition to Mandy Urner, plenty of eyes were locked on Hanwool Park over the weekend. She entered the contest with momentum after performing at a single show in 2021, the Monsterzym Pro — a competition which saw her earn second place. After a close contest, Hanwool Park walked away with gold in Toronto, earning her invitation to 2022 Olympia.

Bikini held an extremely competitive lineup in Toronto, Canada. One name that stood out on the scorecards was Ha Yeun Kim. Kim won her first event of the year at the 2022 Asia Grand Prix Bikini Pro.

Heading into the event, Ashley Kaltwasser stood out as usual because of her impressive activity level. She’s competed at five IFBB Pro League shows this year. Kaltwesser has taken gold at the 2022 Legends Pro, 2022 Golden State Pro, and the 2022 Wasatch Warrior Pro. Ashley Kaltwasser made the most of her time in Canada, earning yet another bodybuilding title.

Emilija Martic entered the contest with hype after a dominant showing at the 2022 Vancouver Island Showdown Pro. While she nearly reached gold, she was narrowly defeated, walking away in second place.

In addition to Martic, Ji Hye Lee was another name fans had their eye on pre-contest. Lee competed at just one show in 2021, which saw her take runner-up at the Monsterzym Pro last year. She also placed second at the 2022 New York Pro. After a back-and-forth in momentum was shared by both competitors, it was Ji Hye Lee who walked away victorious, earning her qualification to compete at Olympia later in 2022.

The third-place finisher from the 2021 Toronto Pro Supershow, Emily Azzarello is back in action and was a fan favorite headed into the contest this year. However, the lineup had plenty of talent showcased. Kassandra Gillis also made her way back on stage. Gillis has had an impressive season thus far, starting off with a sixth-place showing at the 2022 Arnold Classic. Following the sixth-place performance, she brought her physique to the 2022 New York Pro and got a runner-up place.  Kassandra Gillis bounced back and earned a first-place victory at the 2022 Toronto Pro Supershow, punching her ticket to Olympia.

Woody Belfort, Pro Wheelchair competitor returned to action. He last competed at the 2021 Toronto Pro Qualifier, a competition which saw him earn second place. He dominated the stage en route to earning the title this weekend.

Fitness Volt would like to congratulate all of the winners at the 2022 Toronto Pro Supershow, and look forward to seeing them on stage at 2022 Mr. Olympia this December!