Calum Von Moger shared an inspiring citation and a video from the hospital. 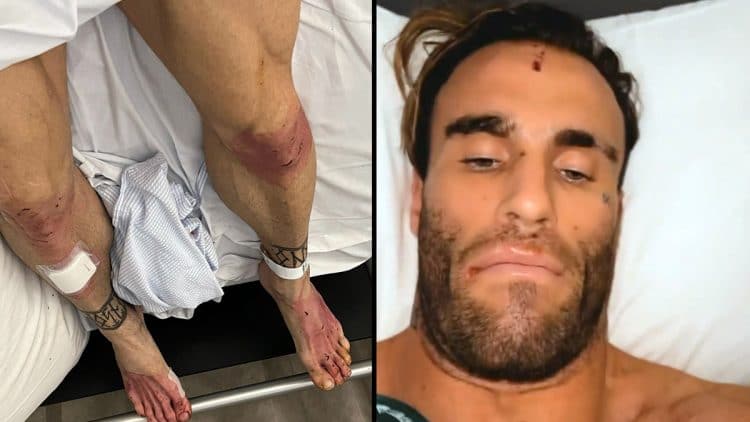 After a series of unfortunate events, the Australian star, Calum Von Moger, jumped through a second-story window, which was also allegedly a suicide attempt. Doctors took Calum into the ICU, where he underwent surgeries and stayed until recovering enough. For the past month, Calum himself did not post or share any updates. However, the Ex-Mr. Universe has for the first time since the accident shared updates to his social media, as on June 6, two posts dawned on his Instagram.

Calum Von Moger’s first Instagram post is a citation from the Bible. It explains that God has plans for Calum, which hopefully means that he understands his worth. Calum also added a short but powerful caption, which reads:

Calum Von Moger’s second post sees him recording a video in the hospital with the caption:

“What waking up from a bad dream looks like”.

He filmed his hands and arms, both of which were covered with scratches and cuts. Many of Calum’s wounds required stitches, which are also very visible in the video.

“Feel like I just woke up from a very bad dream 👿😈… but I am still alive and recovering well.”

Calum Von Moger recently pleaded guilty to possession of various drugs, including meth, for an incident which happened in January. His court case came just days after doctors approved Calum’s release from the hospital. Ultimately, the court did not convict Calum, but he had to pay $500 to a charity decided by them. Calum had his lawyer to thank, as he updated the court on Calum’s setbacks over the last few years. The court sympathized with Calum and did not want to be too harsh.

It is known that Calum Von Moger has difficulties in regards to substance abuse, but with his life being very hectic, it is very hard to pinpoint the exact moment where everything went downhill. Calum was a victim of car-jacking with firearms upon moving to LA. Furthermore, he suffered quad, knee, and bicep injuries, because of which he started suffering from depression and anxiety.

In 2020, Calum Von Moger discovered that he had a secret child and started fighting for custody. This all led to him getting involved with drugs and other incidents, which culminated in the recent jump incident.

It is nice to see that Calum Von Moger is both in a stable physical and mental shape following the incident. However, it is just now possible to fathom the extent of his injuries, as he also shared a video.

This could be a wake-up call and a new beginning for Calum, and he seems to have taken the right approach this time. Hopefully, Calum’s condition keeps improving, and his recovery goes by well.