No Result
View All Result
Profiles
Fact Checked
Fact Checked
This article was written by one of our qualified writers, and fact-checked by our experts. The numbers in parentheses (e.g. 1, 2, 3, etc.) throughout the article, are reference links to peer-reviewed studies.
Our team of experts include a board-certified physician, nutritionists, dietitians, certified personal trainers, strength training experts, and exercise specialists.
Read Our Editorial Process

Life and accomplishments of Ashley Kaltwasser. 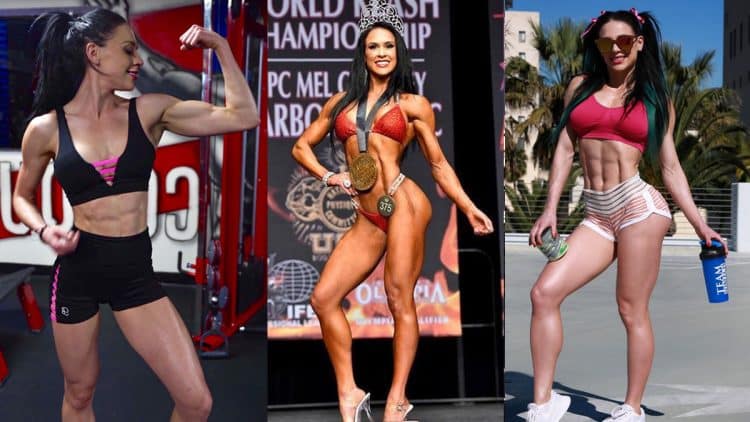 Born on Nov. 22, 1988, in Akron, Ohio, Ashley was into sports while growing up and began gymnastics training at four years old. The former Bikini Olympia champ was also a track and field athlete and competed in indoor pentathlon.

While competing at Coventry, Ashley broke over seven track and cross country records, all of which still stand. Furthermore, she was awarded a track scholarship to a Division I college for her incredible performance in sports.

Kaltwasser credits her slim and athletic physique to her gymnastics practice during high school. Per the bikini athlete, her glutes had developed during her sports years and before she started lifting weights, giving her bodybuilding career a solid foundation.

Kaltwasser discovered the bikini division in bodybuilding shows after graduation from college. Bored of her monotonous daily routine and inspired by what she saw on stage, the soon-to-be three-time Bikini Olympia champ decided to try her hand at the sport.

In 2011, Kaltwasser took the plunge and started training with the goal of competing in a bikini contest.

”I won Ms. Bikini Olympia three times, but I want to inspire even more people to better their lives in health and fitness.”

Kaltwasser wasted no time and stepped on stage for the first time in the same year she started training. She trained rigorously for eight weeks in prep for her first bikini show, 2011 Elite Physique, where she surprised everyone by winning her class and overall.

The former Bikini Olympia champ was bitten by the competitive bug after her first show. Plus, she realized she had what it took to make a name for herself in the sport.

She participated in a total of six shows in 2011. Kaltwasser is probably the most active pro in the competitive bodybuilding circuit.

Ashley Kaltwasser earned her pro card two years after she started lifting weights, a feat only a few other bodybuilders have achieved.

Kaltwasser won the biggest title in the bodybuilding industry in her division — the Bikini Olympia in 2013, a couple of years after first stepping foot inside a gym and becoming the first rookie to take the title.

What followed was arguably Kaltwasser’s most successful year as a competitive pro bikini athlete. She competed in 12 shows in 2014 and won 10 of them, including the 2014 Bikini Olympia.

Her dominance continued into 2015, where she won both the shows she competed in, including her third consecutive Bikini Olympia title.

2021 was the busiest year in Kaltwasser’s competitive career; she competed in 14 shows, roughly translating to one show a month. She’s probably the only former Olympia champ to compete so frequently.

Kaltwasser is known for her hard training regimen. She trains six days a week, including five days of strength and three days of cardio, and takes a day off from the gym to allow her body time to rest and recuperate from her workouts.

Although Kaltwasser has been blessed with great genetics, her success did not come without hard work and persistence.

“I’m a former track athlete and grew up in the state of Ohio. Being an athlete I always knew how to work hard. The practice was no joke.”

Wednesday: Back and Biceps

“There will always be times when you don’t feel like hitting the gym—but those are the days you make the most improvements. Attitude is a powerful thing, and it’s important to learn how to build up your mind as well as your body.”

The former Bikini Olympia champ does not count her calories. However, she follows a high-protein, low-carb, and moderate-fat diet to stay in contest-ready shape throughout the year.

Kaltwasser doesn’t like eating a bland diet. “I believe in eating tasty foods during prep,” she says. “If you don’t like a certain food in your diet, then just make a substitution.”

During prep, Kaltwasser typically removes additives like almond milk, coffee creamer, and other condiments. Plus, she cuts down on extra food nibbling while increasing her water intake to at least 11⁄2 gallons a day.

The fitness icon doesn’t shy away from cheat meals. She eats one cheat meal a week until three weeks out from competing. Mediterranean food is her second choice if she wants to opt for a healthier option on a cheat day.

“I like to follow a low carb, moderate fat diet, but I am very lenient with it. I don’t have a certain diet that I stick to. I don’t count calories but I do stick with lower carbs and moderate fat because that’s what works best for me.”

Ashley Kaltwasser is a veteran bikini division athlete. The fitness icon has been competing for over a decade. Notably, the sport of bodybuilding is ever-evolving, and she has done a great job of staying on top of her game and delivering every time she steps on stage.

Kaltwasser placed seventh at the 2020 Bikini Olympia and jumped four ranks to take a third-place finish at the 2021 Olympia. Judging by how she’s doing in the 2022 competitive season, it’d be safe to say that Ashley will be going in for her fourth Bikini Olympia title in December in Las Vegas, NV.