Blessing, Noel, Donna, Lauralie, and five other athletes took first place at the 2022 New York Pro, qualifying them for the 2022 Mr. Olympia. 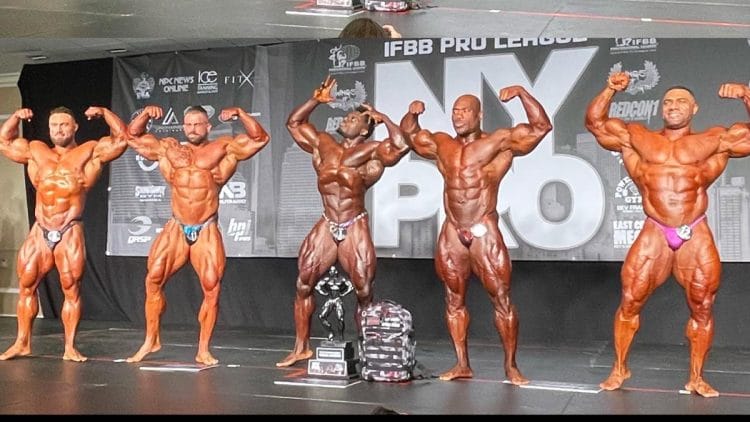 This year’s season of bodybuilding is in full swing. The official results were rendered for the 2022 New York Pro. In total, nine bodybuilders won in their respective divisions, and will now have the opportunity to compete at the biggest show of the year. 2022 Mr. Olympia is expected to take place in Las Vegas, NV. from Dec. 15th – 18th.

Last weekend saw bodybuilders take the stage at the 2022 Indy Pro. Many pegged fourth-place Arnold Classic finisher Justin Rodriguez as the clear favorite heading into the contest. However, he was out conditioned by Blessing Awodibu, who returned to the show after coming in third place the year prior in his Pro debut. Both bodybuilders attended the New York Pro this weekend, and fans deemed this show their round two.

Looking for redemption, Noel Adame was back in action after a successful 2021 season of bodybuilding. He won the 2021 Puerto Vallarta Pro, which put him on the map as a top 212 competitor. Adame proved he wasn’t out of his depth after competing at last year’s Mr. Olympia contest, where he took 14th place, respectively.

It looked like he was about to clinch the victory at the Indy Pro last week, but the judges saw things differently and awarded Bryan Balzano instead. The show concluded with Noel Adame winning the 212 title.

Despite being a little long in the tooth, Paul Baker was a physique to watch out for considering how well he performed at the 2022 IFBB Emerald Pro back in April. Baker secured first place in the Masters Over 40 division. Paul will be challenged on stage when he meets fellow Classic Physique standout, Dancovea Anderson. Anderson competed at only one IFBB Pro show last year but delivered a second place performance at the Texas State Pro.

Of course, it wouldn’t be a Classic Physique contest without Neil Currey. His 2021 season was filled with highs and hype around his name continued to build after getting third place at last year’s Puerto Rico Pro. In what turned into one of his best performances, Currey took second place at the 2021 Tampa Pro last Aug.

Tommy Calrk also took to the stage and showed off his impressive physique. Clark had an extremely busy season last year, competing at a total of seven IFBB Pro shows. Momentum was on his side following second place at the 2021 Milwaukee Pro. Clark took second place once again at the 2021 Pro Miami Muscle Beach before notching a gold trophy at the Lenda Murray Savannah Pro in the same calendar year. After an intense competition, it was Neil Currey who walked away with gold.

Men’s Physique staple Sadik Hadzovic entered the New York Pro with tons of momentum after taking time away from the sport to improve his physique. After nailing first place at the Pittsburgh Pro earlier this month, Sadik returns looking to turn in another statement-making performance. Las Vegas’ Kyron Holden battle Alexander Toplyn and Hadzovic on stage again after placing right behind him just a couple weeks prior in Pittsburgh, Pennsylvania. In the end, Kyron Holden won and secured the Olympia invitation.

Stephanie Flesher returned to the stage after battling with Theresa Ivancik last week at the 2022 Indy Pro where she secured second place. Flesher had a killer 2021 season in the sport and started off last year with a seventh place appearance at the Omaha Pro. In what was perhaps her best performance last year, Stephanie made it to the podium in third place at the 2021 Chicago Pro. By the end of the show, Donna Salib left no doubt with the judges, winning first place.

Natalia Abraham Coelho is back for more gold after nailing first prize at the recent 2022 Pittsburgh Pro. She remains one of the most dominant Women’s Physique bodybuilders and won two major shows last year before placing in second at 2021 Olympia.

In addition, popular Korean bodybuilder Ji Hye Lee made her anticipated appearance in New York over the weekend. She entered the event with a considerable amount of momentum after a second place showing at the 2021 Monsterzym Pro. After impressing the judges, Natalia Abraham Coelho won the Women’s Physique title.

Bikini juggernaut Lauralie Chapados has done a great job of maintaining dominance as of late. Her 2022 season in the Bikini division has been flawless. Taking first place in Bikini at the 2022 Arnold Classic, she has already earned her invitation to compete at Mr. Olympia later this year. Chapados hasn’t slowed down yet and also won first place at the 2022 Pittsburgh Pro a few weeks ago.

Florida’s Janet Layug intended to push Lauralie on stage, as she did at the Pittsburgh Pro. Janet put forth a respectable showing a few weeks ago, and reached the podium in third place, behind runner-up Ashley Kaltwasser and champ Chapados. Despite a close race, it was Lauralie Chapados who won the Bikini title.

Despite only competing at one IFBB Pro show in 2020, Jossie Nathalí Alarcón made the most of her time in the limelight and won at the 2020 NPC North American Championships. Given that she took 2021 off from IFBB Pro shows, it’s safe to say there is an air of mystery surrounding her physique.

Mandy Harbin join Jossie on stage as she aims to gain momentum as a prominent Figure bodybuilder. She competed in one IFBB Pro show last year at the 2021 Chicago Pro where she took 16th place.   In the end, Jossie Nathali presented a package that was hard to reject and won first place.

Dr. Sunny Andrews was a sure-fire favorite this weekend on the heels of her emphatic victory at the 2022 Pittsburgh Pro. Andrews made it clear that she intended to keep making improvements to her physique after getting third place at the Arnold Classic in Ohio a few months ago.

In Sunny’s way is Pittsburgh Pro runner-up Kassandra Gillis. Considering that Kassandra and Andrews were separated by only five points at their last show together in Pittsburgh, surely both women are eager to leave no doubt as to who the best Wellness competitor is. Ultimately, Sunny Andrews put forth a package that couldn’t be denied and won first. 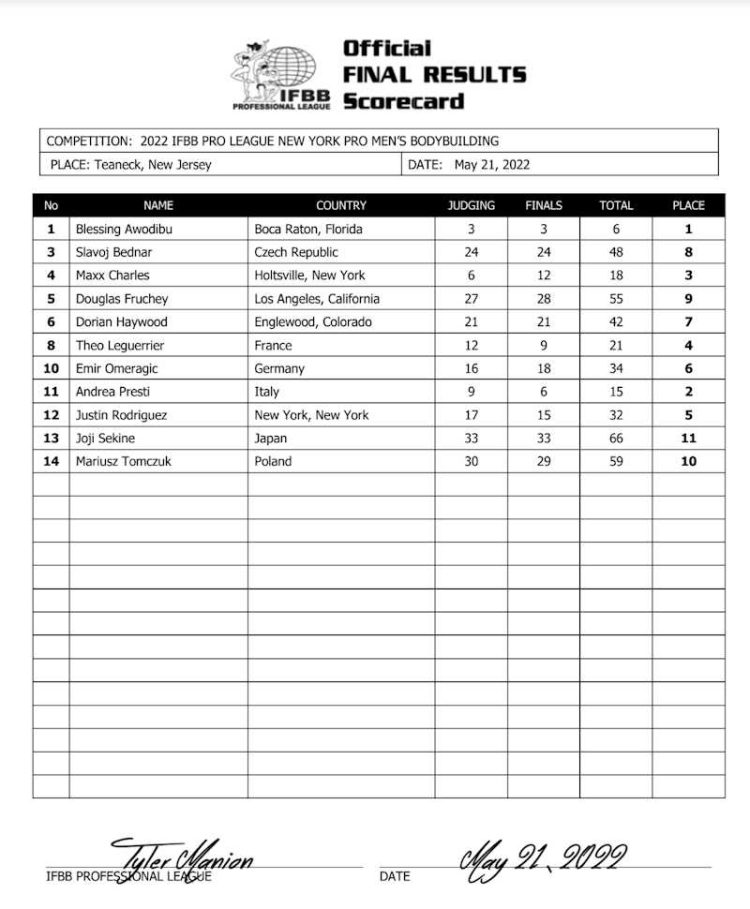 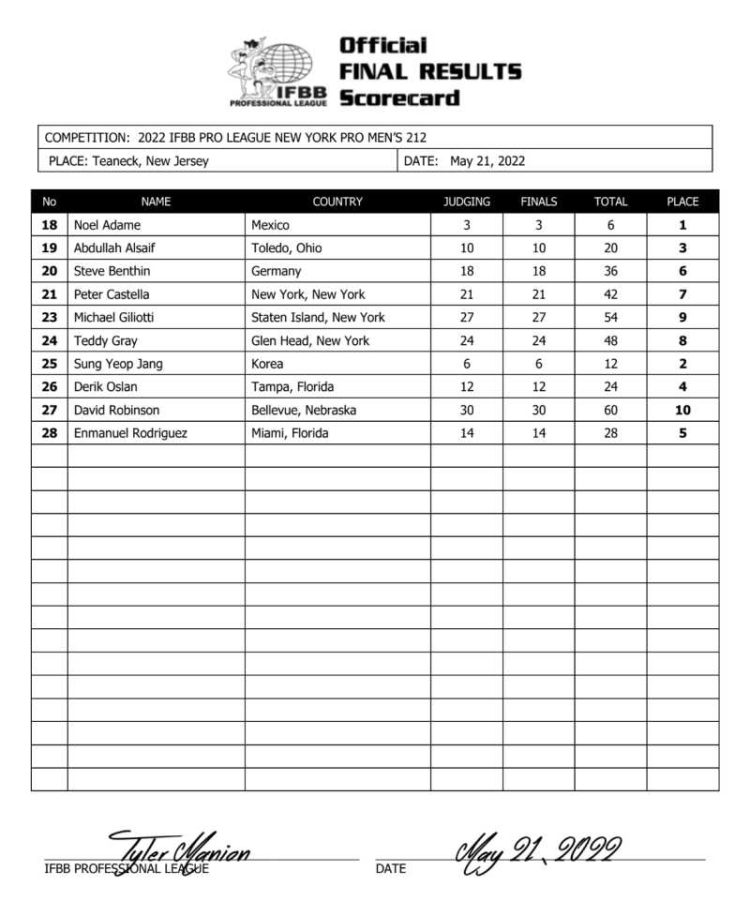 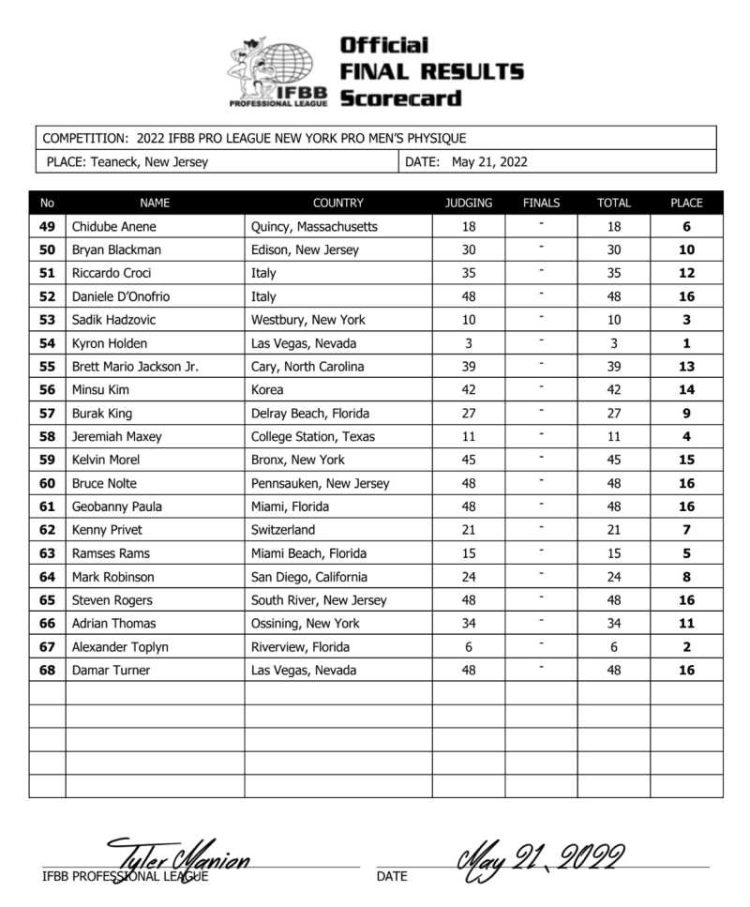 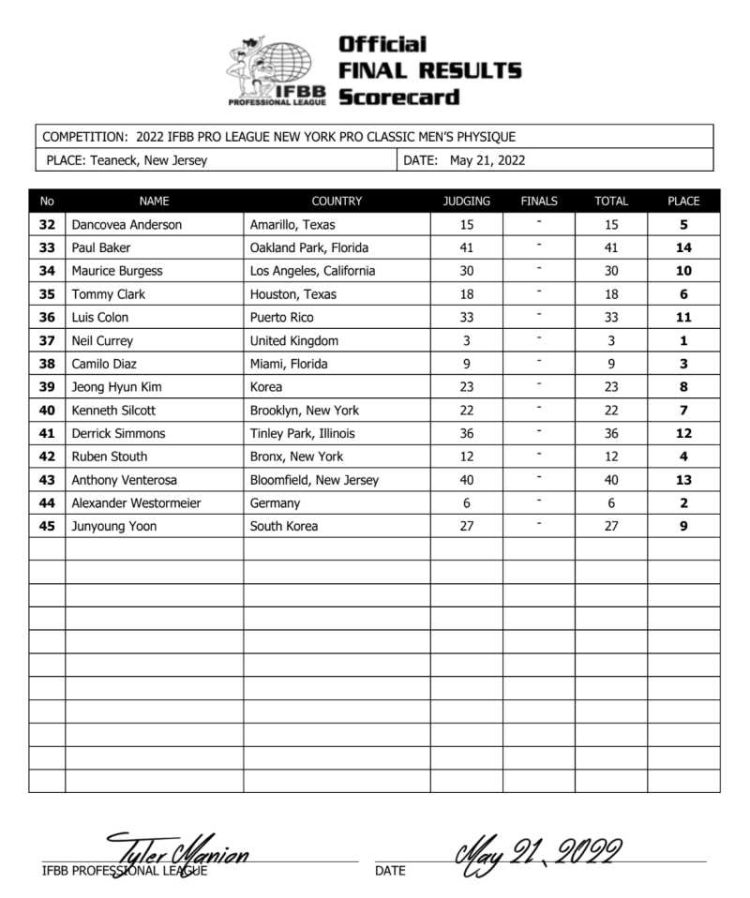 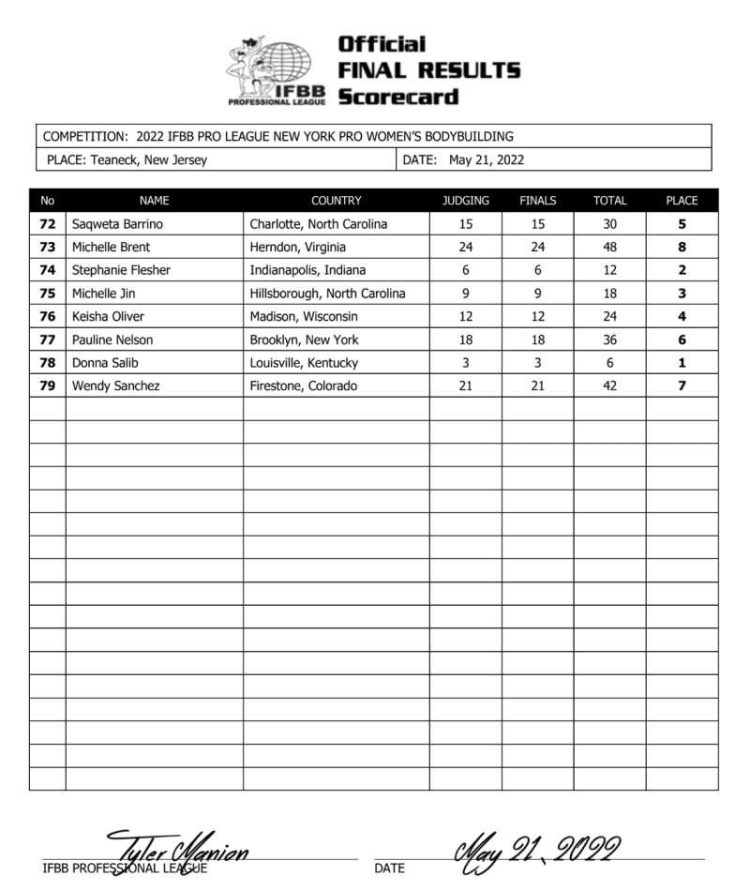 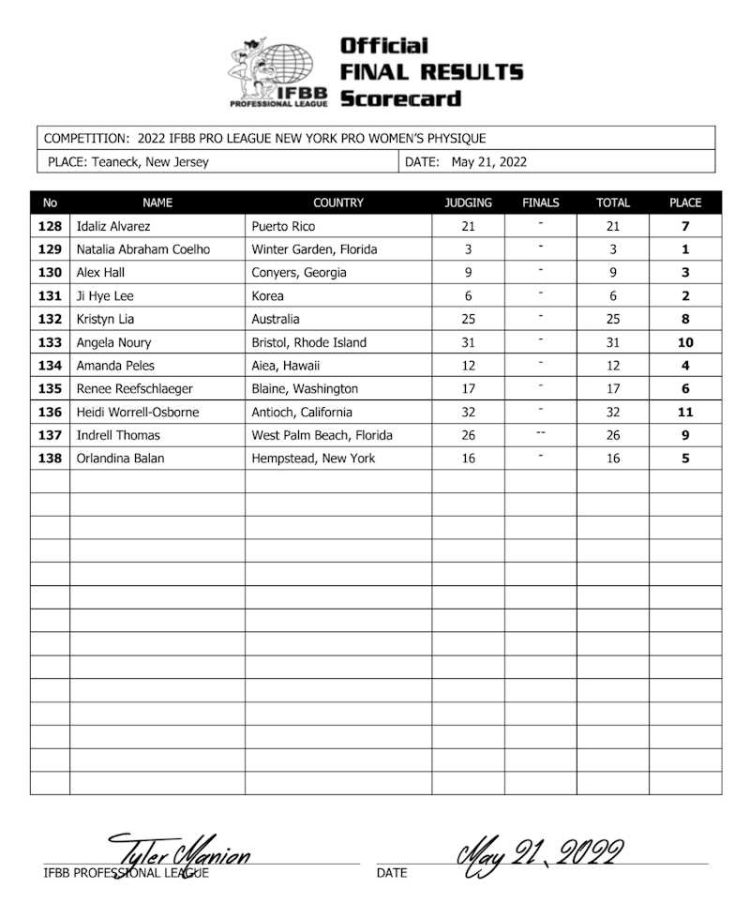 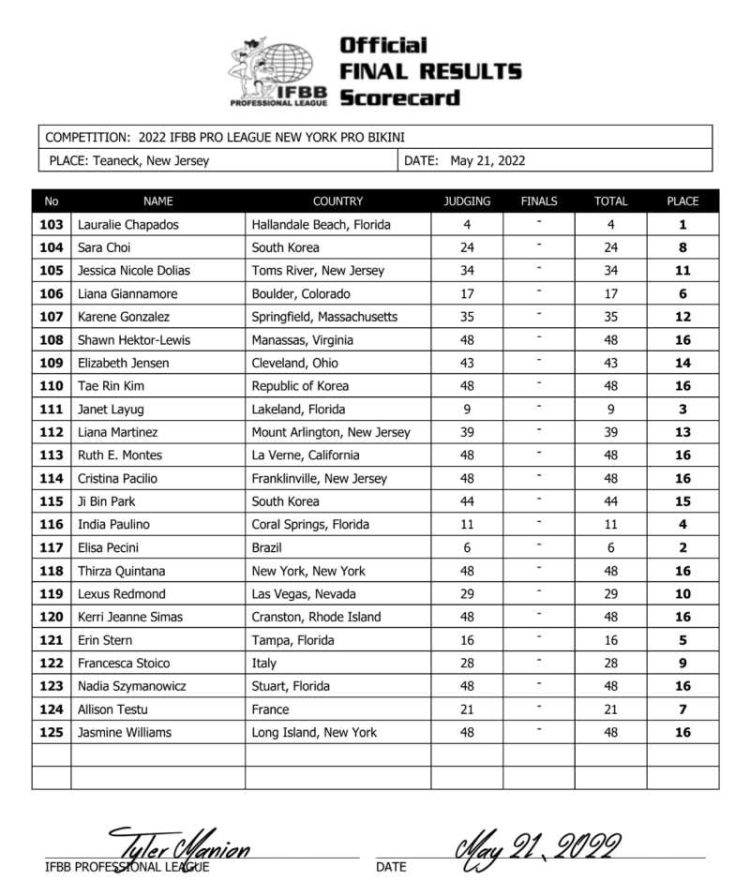 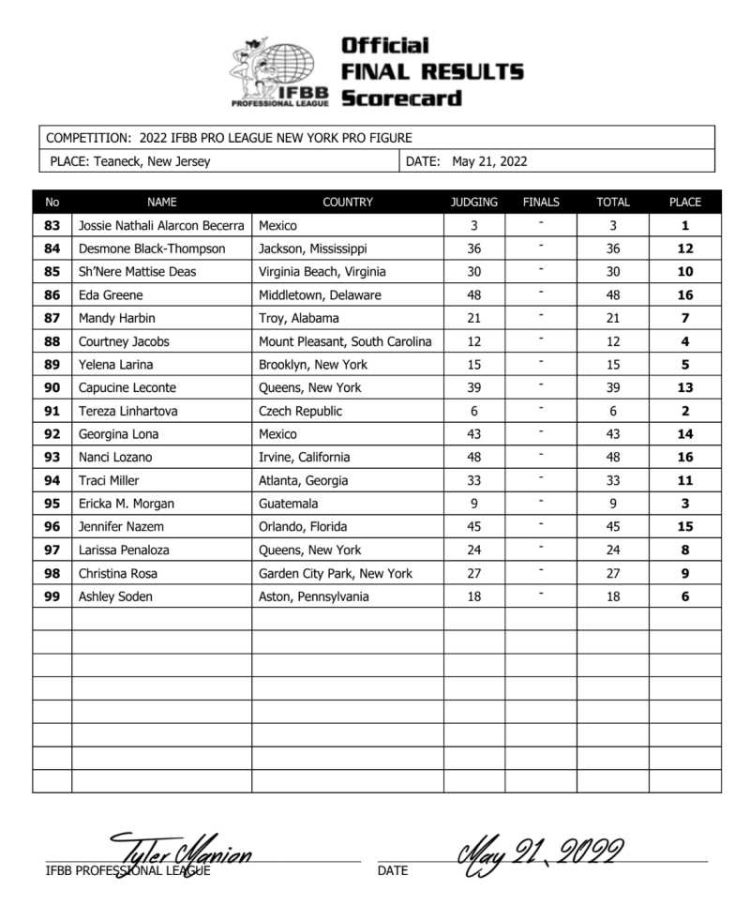 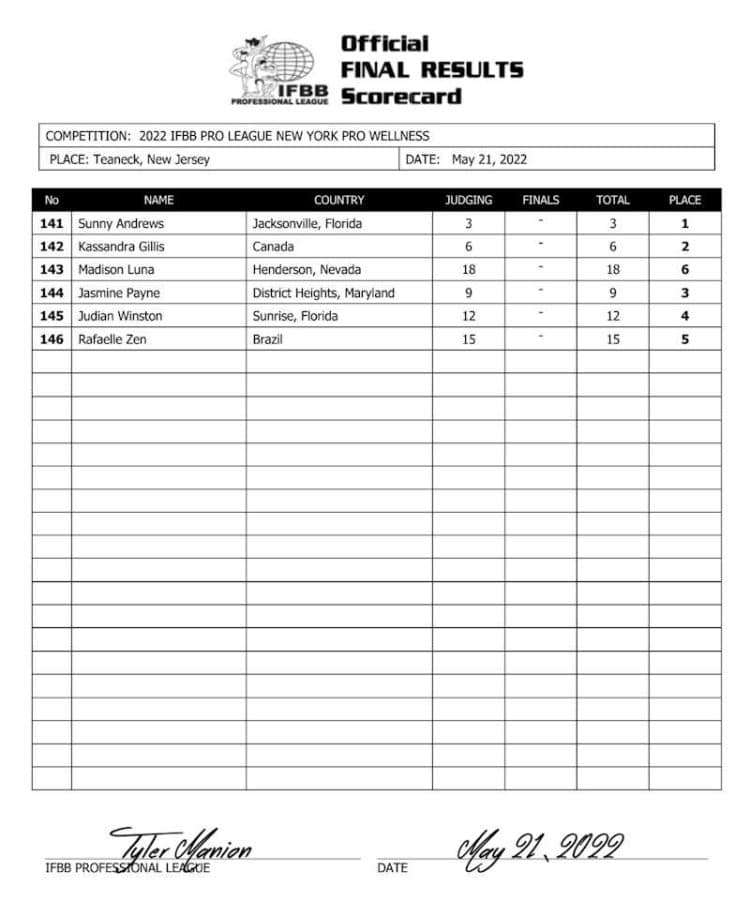 Anticipation for the biggest show of the year continues to build. Fitness Volt would like to congratulate all of the winners on their major victory at the 2022 New York Pro!

Big Ramy Opens Up On 2022 Mr. Olympia Prep With Dennis James: “Nobody Can Stop Me”

Big Ramy Opens Up On 2022 Mr. Olympia Prep With Dennis James: “Nobody Can Stop Me”