Conor McGregor Fans Getting Knocked Out In UFC 229 Fan Brawl

The main event as last night’s UFC 229 may legitimately be the most chaotic scene in UFC history as it’s unfortunately ended inside and outside the T-Mobile Arena in wild brawls.

Following the post-fight brawl between Khabib, Conor McGregor, and the both fighters’ teams, a melee ensued between fans of the Khabib and Conor. In the following video of the melee shows multiple McGregor fans are being knocked unconscious near one of the arena’s food courts.

The fans on both sides of the rivalry warred with each other inside & outside of T-Mobile Arena in Las Vegas.

In the one of The Biggest fight in the history of MMA, lightweight UFC champion Khabib Nurmagomedov defeated Conor McGregor via a neck crank in the fourth round. After the victory, Khabib jumped the cage and charged McGregor’s teammate Dillon Danis, which sparked a crazy wild brawl between the two teams.

Huge brawl broke out between Khabib and Conor fans in the hall after UFC 229!! The Irish and Russians mix like oil and water 😂😂😂 #McGregor #Khabib pic.twitter.com/hDOuAYzmpd

Pandemonium at the strip in Vegas y’all #ufc229 pic.twitter.com/0hNM7E2OTn

Dana White told the press at the post-fight press conference that he was “disgusted” and “sick” over the situation. White said that UFC is Regulated by The Nevada Athletic Commission and NAC is intended to investigate the brawl and many of the offending parties could be subject to punishment. 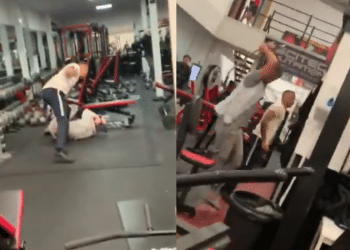 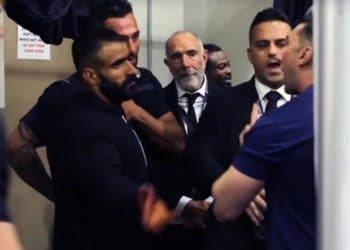