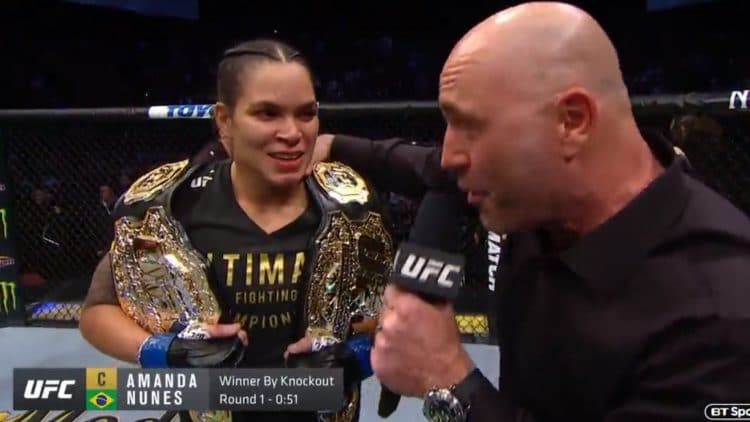 Amanda Nunes knocks out Cris Cyborg in the first round!

UFC women’s featherweight champion Cris Cyborg attempts to extend her dominance to another level defending her title for the third time against Current Bantamweight champion, Amanda Nunes, who jumps in weight class and has an opportunity to become a first female fighter to hold titles in two weight classes simultaneously, should she beat cyborg.

Meanwhile, Cyborg is unbeaten in her last 21 fights. Her lone loss came in debut fight back in 2005. With 17 of 20 career wins came by knockout.

The UFC created the women’s featherweight class specifically for Cyborg, and she finished the year with a win over Holly Holm last year. But since then Cris Cyborg has fought only once. She has highly criticized the UFC and Dana White for not offering her fights or building the 145-pound division.

After tonight’s title defense, cyborg has one fight left in her contract. If the promotion didn’t make any adjustment in promoting the featherweight division, Cyborg has already discussed transitioning into professional boxing world.

Both champions started throwing big shots early on. Cyborg lands a leg kick and pushes forward, Nunes wrecks her with a big left hook, then a right hand. Cyborg looks visibly hurt. Nunes landed another right hand that stuns Cyborg. Overhand right dropped Cyborg on her knees. Nunes landed non stop hellfire that put Cyborg down on the canvas that was it. What a fantastic fight.

Jones asked his Twitter followers for suggestions for his UFC 232 walkout song, and it completely backfired Boy, oh boy......