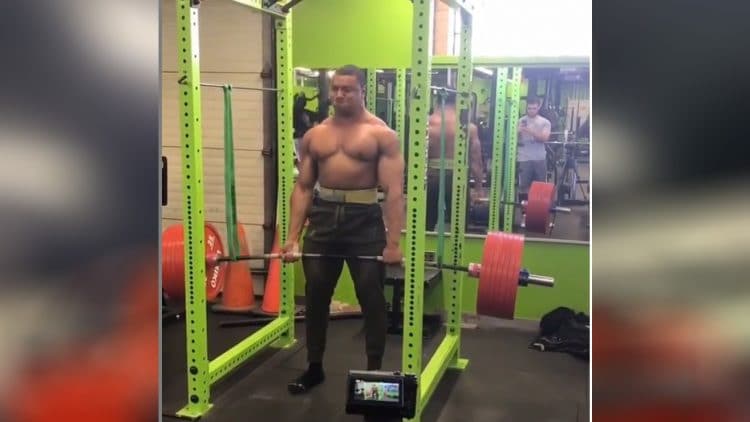 Nothing can stop Larry Wheels

This might answer the question of whether Larry Wheels is human or not… during an 826 pound Deadlift for three reps, Wheels started to bleed from three different places on his chest.

This isn’t the first time blood was shooting out of Wheels while deadlifting a massive amount of weight. Check out this video (Skip to 6:21 for his set) where he bleeds from his face during a 765-pound Deadlift for reps!

Now, many might think there’s something seriously wrong with bleeding out of your face (Or chest) during a super heavy lift. But it’s really not a big concern. Thousands of people bleed during heavy lifts all the time (Especially powerlifters).

The reasons for this range from high blood pressure, to popped vessels, and even holding your breath during the lift (Valsalva Maneuver). Wheels have mentioned having high blood pressure before due to using certain compounds and has even said his head feels like a balloon in the morning when goes to tie his shoes.

So we might assume that the pressure build-up in his body resulted in the bleeding. But for it to come out his chest? Maybe he had open skin which caused this to happen.

As one of the fiercest powerlifting competitors, Larry Wheels is known for pushing the limits of human strength. Wheels recently...

Larry Wheels is a known commodity in the world of powerlifting. The decorated powerlifter took to social media and showed...

Just two days into 2022, a versatile strength athlete Larry Wheels started posting some huge lifts. He did a chest...

Eight-time Mr. Olympia winner Ronnie Coleman reacted to some of Larry Wheels’ heaviest lifts. Ronnie has become one of the...