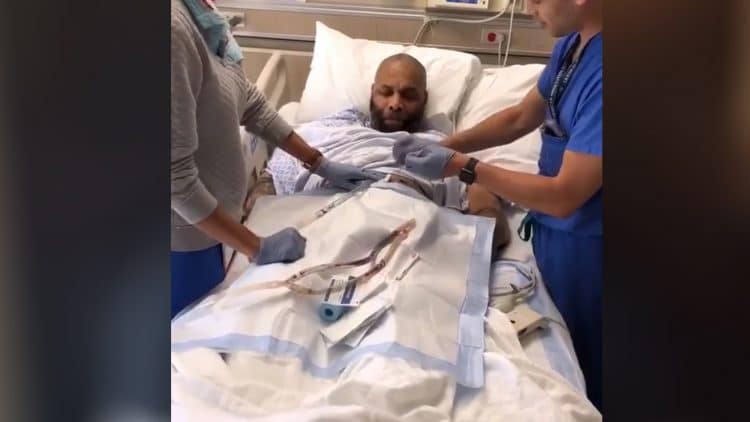 C.T. Fletcher is fully recovering but still finds a way to make light of his post-operation discomfort.

After a successful heart transplant surgery, C.T. Fletcher underwent a pretty rough procedure 2-3 weeks post operation. He posted a video on Instagram of his Doctor sewing up his stomach after having 5 drain tubes placed into his stomach to drain blood. Now, although he’s making big improvements, his abs may never look the same due to the incisions but we all know it won’t stop him from trying as he’s always been a true warrior.

“IN TOTAL 5 DRAIN TUBES WERE INSERTED INTO MY ABDOMEN, TO DRAIN THE BLOOD OUT. WILL I EVER SEE MY ABS AGAIN? LETS SEE WHAT A DETERMINED 60 YR OLD CAN DO”.

Here’s the video below of Fletcher is obvious discomfort:

Fletcher has had so much support throughout the entire process that he’s doing everything he can to stay strong for his fans, family, and friends. In the video, he jokes about a part of the procedure where his stomach is sewn together.

“That was the biggest sit-up of my life right there”. “You want to get your abs tight in one sit-up for the rest of your life, just do that”.

Fletcher was in obvious discomfort as the Doctor stitched up skin but it’s still great to see a sense of humor despite the circumstances.

His Instagram was flooded with so much love and support but one which stood out was a message from Phil Heath. It was nothing too fancy other than a “Much luv Brother,” from the seven-time Mr. Olympia but it was still very thoughtful of him to reach out to the big man. Fletcher replied with “THANK YOU CHAMPION, MUCH RESPECT TO YOU”.

We wish C.T. Fletcher the speediest recovery and best health following his surgery.