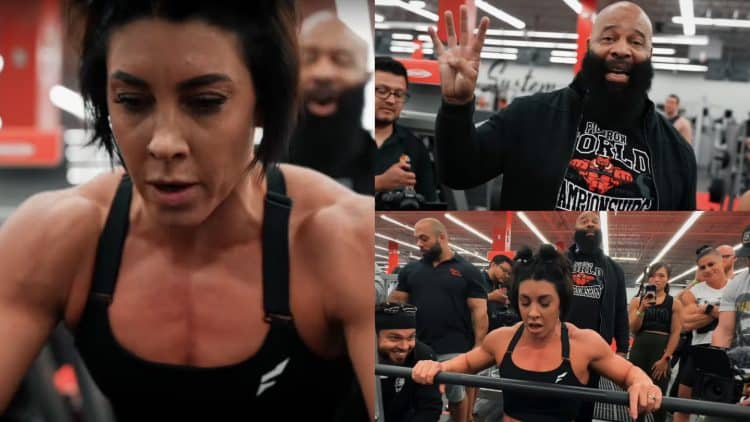 Dana Linn Bailey reached the top of the sport during her bodybuilding tenure. The 2013 Women’s Physique Olympia champion is also a popular fitness influencer who maintains a strong presence online. In a recent video uploaded on YouTube, Bailey destroys the smith machine bench press for an intense 140 reps with the help of powerlifting legend C.T. Fletcher.

Dana first made headlines as a Women’s Physique standout for her aesthetic look and impressive v-taper. She was crowned the winner of the Women’s Physique division’s debut at the 2013 Olympia. Dana Bailey was looking to defend her throne the following year but eventually was ousted from her throne by 2014 Olympia winner Juliana Malacarne.

Bailey knows what it takes to be at the highest level as she learned from some of the most respected minds in the game, including bodybuilding icon and four-time Mr. Olympia Jay Cutler. When Dana has spare time, she’s also linked up with celebrated coach Hany Rambod for a brutal shoulders workout. Bailey regularly gives a look into her lifestyle after stepping away from competition and quickly gained over 520k subscribers on YouTube and over two million on Instagram.

Dana enjoys collaborating with other celebrities and fitness influencers. In September, Bailey joined forces with bodybuilder Kristen Nun for a high-volume leg day workout. She went through a series of squat variations and encouraged her fans to feel the pressure instead of just using momentum.

Later that month, Bailey teamed up with her husband, Rob Bailey, and bodybuilding guru Joe Bennett. Bennett is renowned for his muscle-hypertrophy-inducing training techniques, and they connected for a hellacious shoulder workout. In her latest collaboration, Linn Bailey tested her Smith machine bench press strength in the company of powerlifter C.T. Fletcher.

CT Fletcher is a highly-revered personality in powerlifting. He endured a heart condition that put his life in danger throughout his career. After various heart issues, he ended up needing life-saving surgery in 2005 and underwent a heart transplant surgery in 2018.

Fletcher powered through adversity and became one of the most inspiring stories in the sport of powerlifting. Many celebrities and superstars, including the ultra-famous Dwayne ‘The Rock’ Johnson, use Fletcher’s motivational words to help them get through a workout.

Dana Linn Bailey chose to step away from competing to focus on a number of projects, including her fitness apparel business, Flag Nor Fail, and to care for her family. Since she’s a former Olympia winner in the Women’s Physique category, she has a lifetime invitation to compete in the division if she decides to return.

Dana continues to push her boundaries in the training room. Last month, she shared her ultimate abs workout while stressing the importance of having a strong core in order to get heavier lifts.

Bailey gave a look into the supplements she likes to use while in retirement. She shared her entire stack and detailed the supplements she uses throughout the day. Dana has shown no signs of slowing down and will be a source of inspiration for the next generation of competitors.