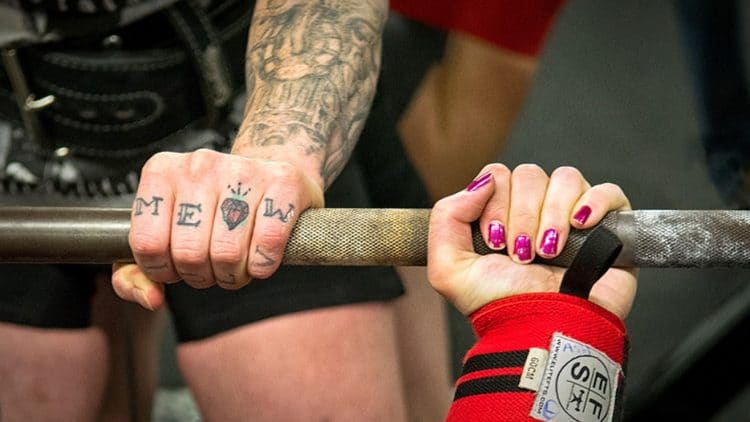 About a week after powerlifter Jaycee Cooper was denied from joining USA Powerlifting due to being a trans woman; Revolution Powerlifting Syndicate made an announcement to allow transgender participation in their own organization.

This announcement was made on February 5th which resulted in many hate comments and even some death threats.

Now, since the USAPL banned trans athletes from competition, there have been requests to retract the policy due to unfair reasoning. Now, the fact that the International Olympic Committee (IOC) allows transgender athletes to compete as long as hormone levels are at fair levels (No hormonal advantages) makes the situation even more frustrating.

The International Powerlifting Federation (IPF) is the parent company of the USAPL, and although the IPF follows the IOC rules, USA Powerlifting decided against the following suit.

“USA Powerlifting is not a fit for every athlete and for every medical condition or situation”.

On January 31st, Minnesota state rep Ilhan Omar (D) issued a letter to the USAPL to lift their transgender policy…

“I urge you to reconsider this discriminatory, unscientific policy and follow the example of the International Olympic Committee. The myth that trans women have a direct competitive advantage is not supported by medical science, and it continues to stoke fear and violence against one of the most at-risk communities in the world.”

We’ve heard of no other information or updates as of currently.

So since this occurrence, Revolution powerlifting Syndicate has had quite the turn of events (Not in a good way). 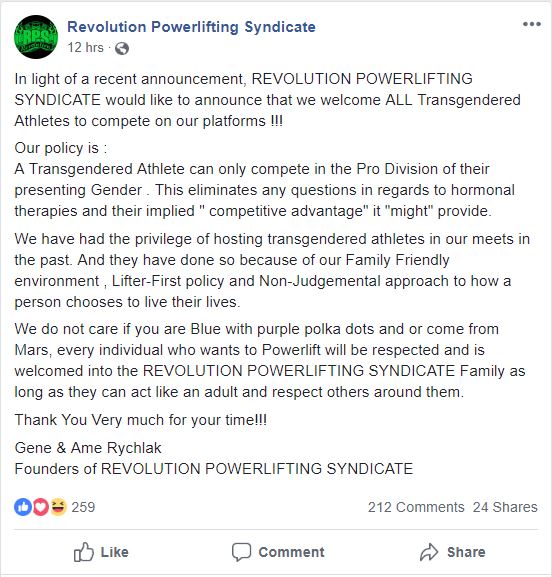 “We have had the privilege of hosting transgender athletes in our meets in the past, and they have done so because of our Family Friendly environment, Lifter-First policy and Non-Judgmental approach to how a person chooses to live their lives.”

Well, it wasn’t long before the hate comments started and the policy was retracted for the time being. 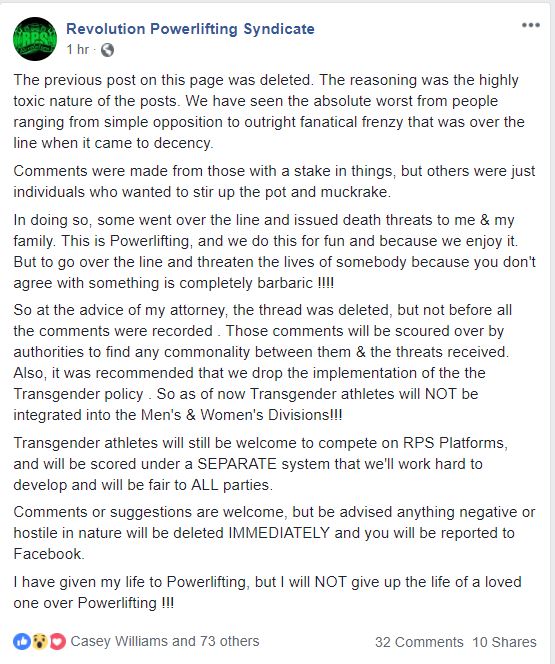 Hopefully, this situation will be resolved and the individuals who threatened Revolution Powerlifting Syndicate will be investigated accordingly.

As of January 1st, 2022, the United States Powerlifting Association has released an updated rulebook which prohibits the use of...

The 2021 USA Powerlifting Nationals delivered some exciting action throughout its runtime. Among the list of many athletes landing new...

The IPF made the decision last year that powerlifting world records set at the 2020 Arnold Sports Festival were not...

Congress is now involved in USA Powerlifting's decision to deny Jaycee Cooper from competing as a transgender athlete. Uh Oh......