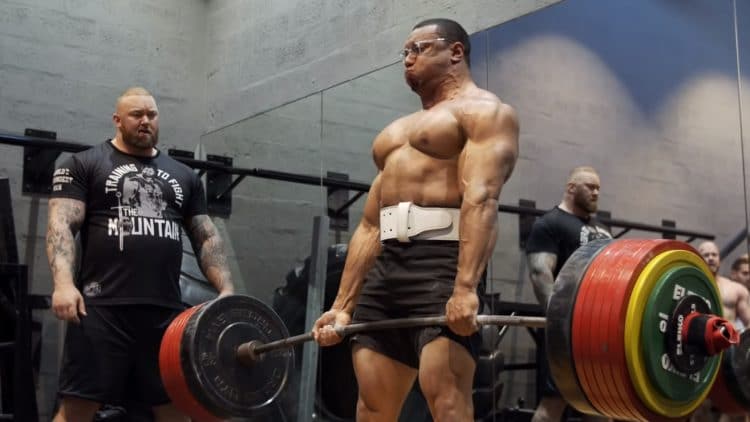 Larry Wheels is the next biggest thing right now and has been for a while. But recently, he went all out in the deadlift to see just how many he can do and you probably guessed that it’s nothing short of impressive. 805 pounds is a lot of weight but we know Larry can make any weight look light… right? Well, most of the time we’d have to agree, but an 805-pound deadlift is nothing for Larry.

The video is a typical Hafthor Bjornsson and Larry Wheels training session while discussing many topics but you know there’s always an awesome feat of strength thrown in for each video between these two powerhouse superhumans.

Now, we have to warn you… there will be blood. That’s right, Larry bleeds once again from his head while deadlifting a lot of weight. But he jokingly says “It complements my complexion. Red looks good on me”.

Check out the 9:18 mark to see him rep out the massive amount of weight.

Now, we knew he was capable of deadlifting 805 lbs for 7 reps as he never ceases to amaze us (We don’t call him the phenom for nothing). But, 2019 should be a big year for the 24-year-old as he’s been training with the current World’s Strongest Man, and Arnold Classic champion Hafthor Bjornsson for a while now.

Larry Wheels has so much potential, already holding record totals in the 242 and 275-pound weight divisions for powerlifting. And he’s only getting started.

But Larry’s confidence was through the roof after his deadlift for AMRAP, as he stated the following to the camera… “Mark my words, I’m going to pull 1,000 pounds…no straps”.