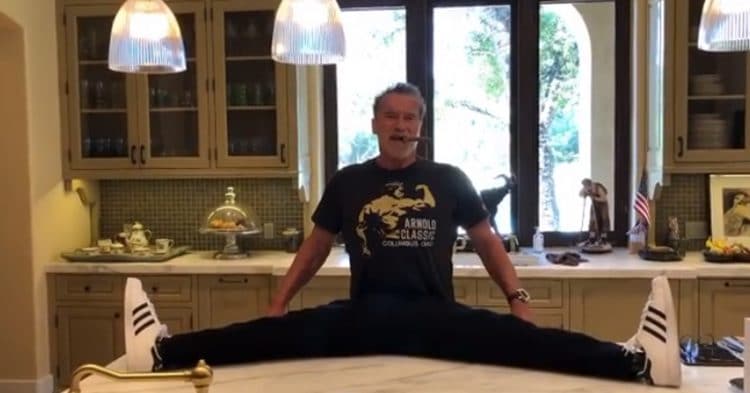 Former Mr. Olympia and movie legend Arnold Schwarzenegger still does his best to keep fit and healthy. Sure, he doesn’t sport the massive muscles anymore but at the age of 72, he’s not really expected too as those days are behind him. Although, you can still catch him “pumping iron,” even with the current situation.

Schwarzenegger shared an at-home, backyard workout earlier last month, and then even more recently, gave some of his best secrets to creating consistent workout routines. And if anyone knows about training, it’s the man who was the best bodybuilder in the world a total of seven times (tied for second-most in history).

In a recent Instagram post though, the Terminator actor offered his best stretching techniques after explaining how important it is to be flexible.

“Flexibility is just as important as weight training and stuff,” he said say at the beginning of the video.

He then proceeds to do a guided stretching routine in what appears to be him in a split on his kitchen counter. He starts with:

“suck it in, up with your arms, and then bend slowly to the side. Very nice, and then to the other side“.

Lastly, he stretches forward a little bit and then places his hands on his hips. And then what happens next is something that a lot of people were definitely not expecting. But we’ll let you watch the video below to see it (makes sure to watch the entire clip).

That’s right… he wasn’t actually doing a split on his kitchen counter as the legs were fake. But he sure fooled a lot of people because he was rather convincing with the setup.

“Anyway, I feel really flexible today, I feel proud of myself,” he said in the video after he revealed that the legs were fake.

He then took the cigar out of his mouth and walked away like an absolute boss. But it was definitely some much-needed humor especially during such uncertain and disorienting times and fans are certainly getting a kick out of it.

Arnold Schwarzenegger has been vocal during the current health crisis, urging people to “go home”. So he has been spending a lot of time with his mini horse and donkey (Whiskey and Lulu) of which he recently celebrated the latter turning one year old.

But Schwarzenegger has also been able to get out a little on is bike sporting a cool Terminator-inspired face mask that says “WE’LL BE BACK” on it.

But he has also supported frontline workers through the crisis by donating $1 million dollars to supply protective equipment. This ‘Frontline Responders Fund’ was a collaborative effort, launched by himself and actor Edward Norton which has raised more than $7.5 million so far.

So, Arnold Schwarzenegger is definitely doing his part all-around and it doesn’t hurt to try and bring joy to a difficult situation as well.

Frog Stretch Guide: How To, Benefits, Muscles Worked, and Variations

Many people have a hard time performing compound lower body exercises like the squat, lunge, and Romanian deadlift because of...