At 23, Ashton Rouska inspires by breaking two tested ATWR for powerlifting in the 105kgs weight class. 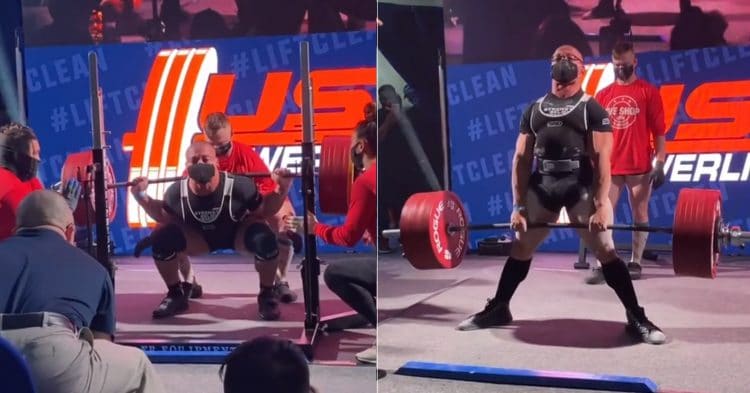 It doesn’t take much time on Ashton Rouska’s Instagram page to see he oozes inspiration. At 23-years-old, his posts are noted with inspirational boosts from “In strength we trust” to “extraordinarily persistent on difficult tasks.” And he has the chops to back up the quotes too.

Last weekend, at the USA Powerlifting (USAPL) Virginia Winter Wrecker competition on November 14, Ashton Rouska proved he could be extraordinarily persistent when he set two new all-time tested world records in the squat and in his total lift.

Rouska entered in the 105kgs weight class and clocked in 98.4 kgs/217lbs himself, and crushed some new records in the squat and total categories. He did it all after three injuries this year, he noted on his Instagram page when he listed his numbers for the squat at 793lbs (360 kgs) beating an Open and Jr. American Record, bench press of 457 lbs (457.4 kgs), deadlift of 844lbs (383 kgs), for a total 2,095lbs that beat the Open and Jr. American Record.

He told his fans and supporters he was “pretty happy” with how the day went.

He felt healthy and can assess his current strength levels a little better than he used to. He also noted to his fans, “You have to have integrity when it comes to your lifting.” He also noted he has a lot of work to do if he wants to truly be the best.

That is what a true champ says after setting two new all-time tested world records, they want to be better.

Rouska didn’t hesitate to thank those supporters. He said,

“To everyone that supported, wished me luck, watched, and has been in my corner, I couldn’t do it without you all. I needed all of your strength to help me get through today, so a big thanks. We did the damn thing.”

He tagged some of his team in the post, and concluded with, “In strength we trust.”

The final day’s outcome for the Winter Wrecker was a win for Rouska, who took the W by 193kgs/425.5lbs over Jeff Spawton the runner-up in his class. Ashton Rouska didn’t just crush the competition in his own weight class, but he also lifted the most in total overall weight classes at the event.

Winning might be a taste he will have to get used to. He’s been crushing them all year. He did the same thing at the Arnold Grand Prix in March 2020 where he set a few records in squat and total once again, two categories that are definitely in his winning wheelhouse this year.

This was after a sickness that resulted in some weight loss, and a few months that have “been brutal” on him. And Ashton Rouska was setting records at his first opportunity.

Keep an eye out for this one.