The barbell front raise is a must-have mass-builder for the front deltoids. Here’s a guide to this often underutilized movement. 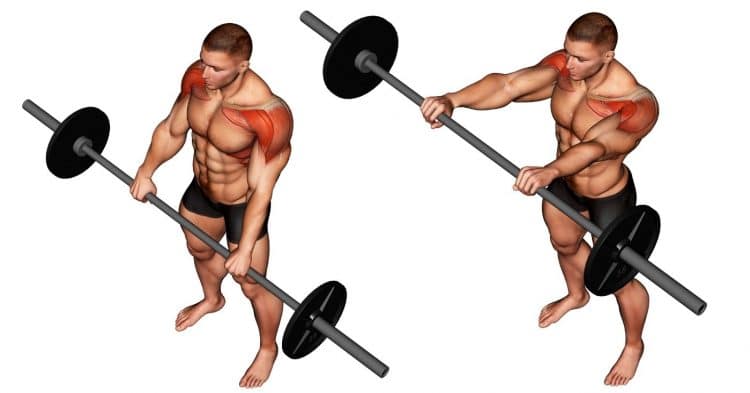 It’s very possible to argue that the front deltoids are an overdeveloped part of the shoulders. This is because, during chest exercises and variations of the overhead press, the front delts are heavily activated. However, most people are likely nowhere near the point of having overdeveloped front delts, and therefore, we present you with the barbell front raise.

Now, many exercisers do these with dumbbells and that’s a great option too. But barbells typically allow us to overload a muscle to the max while reducing the temptation to use too much momentum.

Here’s a guide to the barbell front raise…

This one’s pretty obvious because if you do have any experience with training, you’d know front raises work the front or anterior head of the shoulder. If you’re not familiar with the anatomy of the shoulders though, it has three heads which are the anterior, lateral (side), and posterior (rear) heads.

There are also three bones that make up the structure of the shoulders which include the scapula (shoulder blade), clavicle (collarbone), and humerus (upper arm bone). There are four joints of the shoulder although the glenohumeral joint is probably one you’ve heard of the most.

It facilitates the function of the shoulder as a ball and socket joint and is stabilized by the rotator cuff. It also attaches to the tendon of the biceps and triceps brachii and plays a big role in the various movements of the shoulder.

Collectively, the heads of the shoulders act as the prime mover during abduction (away from the midline of the body) of the arms laterally to the body. They also prevent the dislocation of the humeral head when carrying objects where the arm is pressed against the body.

Here are the main muscles worked during the barbell front raise…

Barbell front raises recruit the anterior head of the deltoids because it replicates the same action – raise the arm up in front of the body.

While you won’t activate the deltoid lateral the same as you would if performing side raises, you’ll still reach the outer or middle deltoid fibers.

One of the best techniques to stimulate the upper chest fibers is to bring a resistance from below to above the pectoral muscles which contracts the fibers in the clavicular head. We’re not necessarily trying to accomplish this, however, it’s a side effect.

The serratus anterior is distinct from surrounding muscles because it’s shaped like a folding hand fan. It’s located under the armpit and beside the ribs and its job is to protract the arms forward like when you throw a punch forward. Its fibers can also help the trapezius muscles to upwardly rotate the lower and upper fibers.

How To Do The Barbell Front Raise

If you do this exercise right, you’ll definitely reap the reward by adding more muscle. Here’s a step-by-step for how to do it…

Tip/s: Start light and get the form down. There’s no need to try and jump to maximum poundages as it’ll limit the effectiveness of the exercise and place unnecessary stress on your joints. You also want your arms to be positioned parallel and not too narrow or wide to maximize results.

While using a barbell is great, it’s not the only option.

Dumbbells allow for a freer range of movement and also allow you to identify a strength imbalance between your left and right side. Not to mention, training unilaterally (affecting one side) allows you to correct an imbalance while also activating more stabilizer muscles in general.

Feel free to use any grip (e.g. overhand underhand neutral) that you feel works best for you.

Cables offer a nice variety of options when it comes to training in general because there are many different handles that you can use. But one big benefit of using cables is the constant tension placed on a muscle.

The barbell or dumbbell raises don’t allow for a good stretch and maximization of the eccentric portion unless you’re at an incline where your arms are positioned behind your torso. Of course, you’d be using dumbbells as this isn’t possible with a barbell.

But cables allow for that deep stretch during the eccentric portion of the exercise, especially when using single-grip handles. You can do it either seated or standing.

Plus, it’s always nice to be able to change things up once in a while or to use a variety of training tools to get the job done.

Many exercisers prefer to use only dumbbells to train shoulders and again, to get that ideal stretch in the muscle, use a bench set at an incline. Of course, it’s also possible to use cables as previously mentioned.

How To Include The Barbell Front Raise in Your Shoulder Routine

There’s nothing complex about including the barbell front raise in your workout routine. But depending on the amount of attention or degree of focus you want to place on the front delts, you’ll have to decide where and how it should fit in.

For example, if your front delts are underdeveloped, then you might want to do a few sets of the barbell front raise first in your shoulder workouts before any other exercises. However, if you do have underdeveloped front delts then you may not be doing enough heavy and consistent pressing in general.

If your front delts are overdeveloped compared to the rest of your delts, then a few sets during your shoulder workouts or after a chest session should suffice… or maybe you don’t need much direct front delt work at all. You have to look at yourself and see where you’re well-developed or underdeveloped and then structure your training accordingly.

Sets and reps will vary depending on the individual. However, 2-3 quality sets of the barbell front raise taken to failure is a good place to start. You should also be doing lots of presses whether the bench press or overhead press which should make up a large part of your shoulder training. Otherwise, you’ll need more isolation work overall.

Now, as far as reps go, this should also vary. Although, it’s never recommended to use maximum poundages with this isolation exercise. It could be very dangerous and most likely not as productive as if you lightened up the weight and performed quality reps.

So with that being said, 6 reps minimum and 20-25 maximum is a good range. Just make sure that you’re using a weight that allows you to reach failure when performing higher reps to ensure optimal muscle overload.

The barbell front raise is a great shoulder exercise and we’d definitely recommend that it’s thrown in every now and then. There’s no one-size-fits-all strategy for utilizing this movement but now you have sufficient information to maximize its use as part of your shoulder training arsenal.

Skipping warm-up is a common mistake among beginner and advanced lifters. Warm-up exercises help loosen your muscles and prime your...

If you are after big arms, then you need to be working your triceps hard and often. Of the three...