Katherine Nye had the opportunity to judge the Hoda & Jenn-alympics on the Today Show where hosts Hoda Kotb and Jenna Bush Hager competed against each other in the snatch lift. 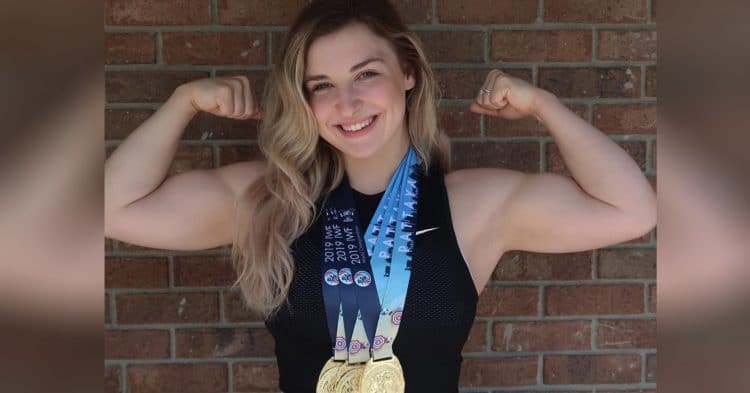 Katherine Nye is a weightlifting legend who was world champion (youngest ever at 21) last year in the -71kg category which earned her the accolade of IWF’S Female Lifter of The Year For 2019. She turned in a 112kg/247lb snatch, 136kg/300lb clean & jerk, and 246kg/542.3lb to earn three gold medals but it doesn’t end there regarding her super impressive accomplishments.

Nye earned a spot on the Forbes 30 under 30 list in 2019 and it really couldn’t have gotten much better for her. Although it did recently when she was given the opportunity to judge the Hoda & Jenn-alympics on the Today Show where hosts Hoda Kotb and Jenna Bush Hager try out weightlifting.

They had to do the snatch which is one of the two weightlifting movements that is performed after the clean and jerk in competition. It involves lifting the weight from the ground to overhead in a continuous movement.

Now, apparently, they have a rivalry going now and have faced off in a few events. But this one pertained more to what we’re all about.

So before they took to the weights, Hager explained that she thinks lifting weights is good for osteoporosis (bone disease) so she does a little bit of training. However, she felt that Kotb had the advantage as the latter trains with kettlebells regularly. “I know that I can lift 36 pounds,” said Kotb.

They both had no idea what they were getting themselves into and based on their reactions, you could tell it was going to be interesting… “Oh, we’re doing that, the big bar… what!” said Kotb. “You lift it up like that?” Hager added she raised her arms overhead. Hoda was concerned about whether they’d have spotters of which they didn’t.

“for snatching, you’re going to go from ground to overhead in one swift motion making you sure you keep your core tight, keep the bar close to your body, and pick weights that are comfortable for you”.

The rules were that they had to lift the maximum amount of weight that they could.

They started with just the bar which weighs 45 pounds and Hager was up first. She lifted the bar up to her clavicle and then used her legs to press it overhead. So not quite a snatch. Kotb, on the other hand, was a little better and brought the bar straight to overhead.

Next, the weight was increased to 65 pounds and they both completed the lift.

Before Nye judged their lifts though, she was asked about how excited she was to compete at her first Olympics.

“Tell us about how you feel in this moment”…

“I’m very excited, with the postponement it was hard to accept that it was going to be a whole year but I’ve been trying to have the mindset that it’s a year to get better, and to improve and to be even better than I was this year so I’m really excited to work towards that.”

Nye was also asked about her world record lift (Junior) of 246lbs last year and she explained that she accomplished this at the World Championships last year and that it was her last shot in that age group.

Now for the judging where Nye analyzed both of their lifts with 65 pounds on the bar. So Hager’s lift was up first and this is what she had to say.

“I love the enthusiasm and honestly it wasn’t bad at all. I would say the one thing is that there are two lifts in the Olympic lifting sports and Jenna did more of a clean and jerk than a snatch. It was a great clean and jerk“.

Now onto Kotb’s attempt which was definitely not perfect as the bar was more lopsided, however, even with her knee issues that she mentioned, she got thew bar up in one single movement and Nye declared her the winner.

This tied them up after Hager won the gymnastics competition judged by gymnast Aly Raisman but then they faced off in the cornhole toss which was judged by snowboarding legend Shaun White of which Hager won to take the 2-1 lead.

Watch the weightlifting competition below…

Millions of people around the world look forward to the Summer Olympics that only comes around every four years. But...

Katherine Nye Earns Accolade of IWF'S Female Lifter of The Year For 2019Katherine Nye's win cements her name in U.S....

Katherine Nye is one of the most powerful weightlifters in the world today. She put that on display by hitting...

Katherine Nye has had quite the year in 2019. Now she gets to cap it off with a massive honor,...