Learn how to do the Barbell Sumo Squat. 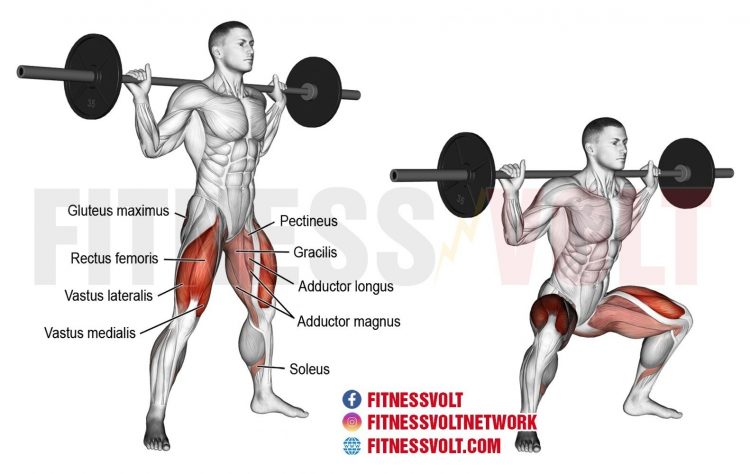 The barbell sumo squat is a lower-body exercise variation of the classic barbell squat that involves taking a wider stance which changes some things about the movement. It may emphasize certain muscles better compared to using a narrower stance but is overall very similar regarding the benefits. That means if your goal is to build strong and muscular legs for aesthetics or sport, this is a variation we’d recommend to anyone who can do it.

Learn how to do this effective squat variation that can help you to build big and powerful legs. In this guide, you’ll learn about the muscles involved in this movement, how to do it correctly, what the benefits are, the best variations, and how to include it in your workouts.

Here’s a guide to the barbell sumo squat.

Any squat exercise will involve most muscles of the body. Below we’ve included details for each muscle worked during the barbell sumo squat.

This is the largest and most superficial muscle that makes up the majority of the size, shape, and appearance of the butt and hip muscles. It’s also one of the butt muscles that also include the gluteus medius and minimus.

The gluteus maximus is a very important muscle for function and aesthetics. The butt primarily extends and externally rotates the thighs and it plays an important role in helping us to maintain an upright posture.

Squats and its variations are on of the best things you can do to get a rounder and more muscular butt.

The quadriceps or quads for short is the large group of muscles that make up most of your upper leg mass. It has four heads; rectus femoris, vastus lateralis, vastus medialis, and vastus intermedialis.

These muscles help to flex the hips and extend the knees during movements such as squats. They’re also important for posture, walking, and the function of the spine and pelvis.

Any squat variation is a good option for developing the quads muscles and forming that aesthetic teardrop muscle.

The reason squats are such an amazing exercise is because they work all the leg muscles. So while we do recommend doing hamstring-focused movements such as leg curls and Romanian deadlifts, squats are a good overall exercise if you had to choose just one.

The adductor magnus is the largest of the muscles that make up the adductor group of muscles in the medial compartment of the thigh. While it assists during adduction of the thigh (limb moves toward the center of the body), the adductor magnus also helps with hip extension and medial rotation. It has anterior and posterior fibers that help it act on the front and back of the leg.

Because the sumo squat uses a wider stance, it may be a better option for working the inner thigh muscles.

The calves are the lower leg muscles consisting of the gastrocnemius and soleus. The gastrocnemius is the larger of the two and what most people think of when it comes to the calf muscles.

It’s the very visible muscle right below the knee that has two heads; medial and lateral and it gives the lower leg a lot of its shape. It joins with the soleus to form the Achilles tendon near the lower portion of the leg.

Then you have the soleus; a large muscle located deep to the gastrocnemius.

The calf muscles plantarflex (point the toes down) the foot and ankle. They are also important for posture, and athletic movements. Although they do have an uneven ratio of fast and slow-twitch fibers.

Squat variations work the calf muscles indirectly and may be responsible for most of their strength and development.

The core group of muscles include the abdominals, obliques, and spinal erectors. The abdominals pull the pelvis and ribcage together (like when doing crunches), while the obliques rotate the trunk and bend it left and right, and the spinal erectors help us to stand up straight and bend backward.

A strong core correlates to a good squat but doing squats builds a stronger core.

Related: Do Squats Work Your Abs?

How To Do The Barbell Sumo Squat

The barbell sumo squat is a version of the squat that uses a wider stance and is performed a little differently hence why it’s a variation.

Note: Make sure to do a few progressive warm-up sets before using heavy poundages to prevent injuries and joint pains.

There’s a reason squats are commonly referred to as the king of leg exercises. Let’s talk about the most known benefits of doing squats.

Squats are king because you can load them heavy and this is how you build strength and size. You’re also building an incredibly strong core which you don’t get with leg extension and bodyweight-only lower body exercises.

The barbell sumo squat offers some training variation that may help to emphasize strength and muscle stimulation a little differently than the classic squat. For example, the stance may shift some of the effort onto the butt and hamstring muscles whereas regular squats may be more quad-focused.

If you play sports then you should be squatting. Aside from building stronger and more powerful legs, athletes usually have to be flexible and mobile enough to squat and explode out of this position in competitive environments and situations. Training the squat transfers over into athletic endeavors.

Burn calories and get fit

Because the squat is a total body movement, it burns more calories than isolation exercises and is also a great way to improve your fitness and keep in shape. Squats are one of the best ways to test your mental fortitude and become a very fit individual.

Here’s a guide to squatting for weight loss.

One of the best things about having variety in your training is that it helps to prevent boredom. But the other benefit is that different exercise variations can also contribute to better progress.

Here are some other versions of the sumo squat that we really like.

Maybe you don’t have access to a barbell, want to vary up this exercise, or prefer to use a different training implement for this movement. Using dumbbells and/or kettlebells (similar to goblet squat) is an excellent choice.

You could always do the most popular type of deadlift which is to use a sumo stance rather than conventional (feet closer together). While the sumo squat is awesome, the sumo deadlift allows more experienced lifters to move serious weight which will increase strength but also the entire posterior chain (backside of the body).

Sumo Deadlift Vs. Conventional Deadlifts: Which is Best?

The Smith machine is a great training tool as it takes the balancing out of the equation. That means you’re freer to focus on the movement. The other advantage is that you do not have to move your feet once you’re in position – simply unrack the weight and descend into the squat.

This is a good choice for beginners too who want to practice the sumo squat but may not be confident enough to use a freeweight barbell.

Free Weight Barbell Squat Vs. Smith Machine Squat: Which Is Better For Gains?

How To Include The Barbell Sumo Squat In Your Training Routine

There’s no perfect strategy for incorporating this movement into your leg workouts.

Most of us who are serious about training typically use a variety of exercises and variations and the barbell sumo squat is no different.

Here are some great ways to do this compound movement.

The sumo squat uses a similar stance to the sumo deadlift. There’s a difference in how the lift feels based on foot positioning and width and the squat version could be beneficial and carryover to the deadlift.

Using various angles is a very common and recommended training strategy. That’s because by changing body position, you may be able to emphasize or shift more of the load onto a specific muscle group.

You might ask, “why not just do isolation exercises if you want to emphasize a muscle group?”

Well, that’s because compound movements have advantages such as allowing you to use more weight overall, have better carryover to real-world tasks, and save time by working several muscles simultaneously.

The barbell sumo squat is an exercise that we recommend including in your leg training arsenal. It’s a total-body compound movement that will help you build incredible size and strength in your lower body while offering a little variety.

Switching up your training is great for preventing boredom and you may find that you see new gains by using different techniques and variations.