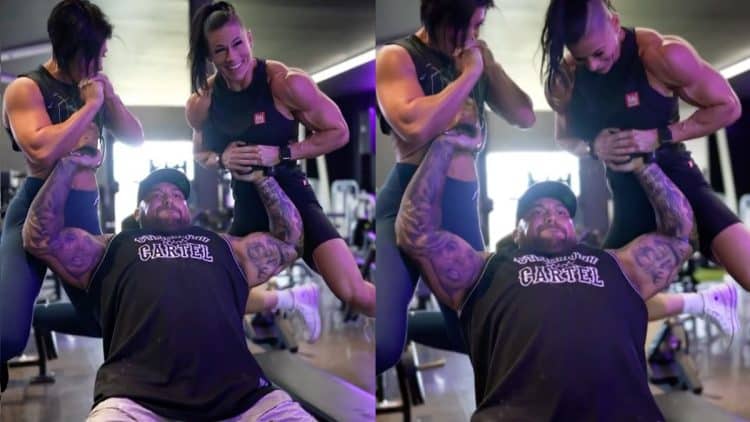 Female bodybuilders Dana Linn Bailey and Kristen Nun are renowned for joining forces inside the gym. While on YouTube, fitness enthusiast Big Boy has often been pictured training with MMA fighters, lifting heavy weights with powerlifters and bodybuilders. In a video uploaded on Instagram, Big Boy can be seen shoulder pressing the ladies instead of a barbell.

Big Boy is known to collaborate with fellow athletes. He recently partnered with seven-time 212 Olympia Winner Flex Lewis for some intense workouts at the Dragon’s Lair gym. They paired up during the holiday season in Las Vegas. Lewis highlighted how different the workout was, and how it would help Boy sharpen up mentally and physically.

With over 811K YouTube subscribers, Big Boy has had some viral moments on social media. During a trip to Gold’s Gym Venice with fellow fitness star Kali Muscle, the two got into a heated altercation over using the heaviest dumbbells made of solid gold. Both hotheads were asked by the manager to leave the gym along with their crew.

Meanwhile, female bodybuilders Dana Linn Bailey and Kristen Nun have experience working together and often join forces to get a tough workout in. Bailey and Nun recently got together for a training session at Labrada Nutrition to perform a high-volume leg-building workout. Bailey chose to step away from the sport having already captured the Women’s Physique title at the 2013 Olympia. She became a fan favorite online through her grueling workouts and collaborative nature.

In a recent video uploaded on Instagram, Big Boy can be seen shoulder-pressing Dana Linn Bailey and Kristen Nun.

“How much weight did this bad dude @bigscboy press?!?

Big Boy was holding on to their weight-lifting belts as he picked up Bailey on his right hand and Nun on the left. Performing shoulder press with a relatively unstable weight requires extra strength to maintain the exercise’s form.

Bailey had also collaborated with bodybuilding legend Jay Cutler, who won Mr. Olympia on four occasions. The two got through a challenging series of chest and triceps workouts. It was interesting to see them share opposing views on how to approach training. Cutler informed Dana he always did 12 reps for everything whereas Bailey likes to make everything as difficult as possible.

She recently joined Nun for an arm workout where they worked on the biceps and triceps. Dana shared that she was training arms for the first time in eight years and wanted to get inspired by “mighty python arm” Nun.

Being able to do pull-ups is every beginner’s dream whether they accept it or not. Pull-ups are considered as an...