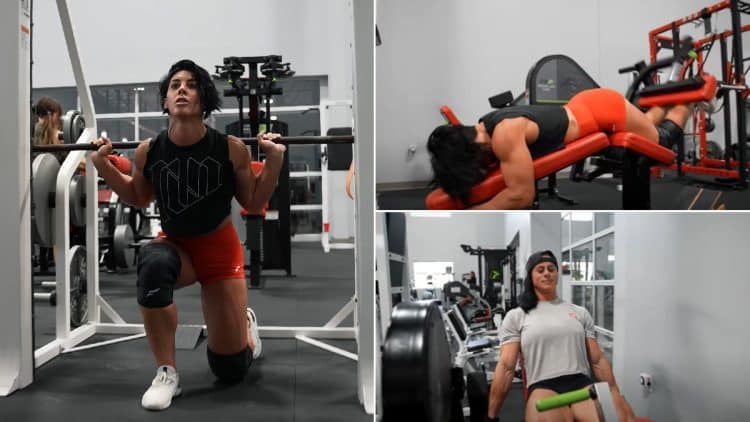 Female bodybuilders Dana Linn Bailey and Kristen Nun have been known to push the limits inside the gym. In a recent training session at Labrada Nutrition, Bailey and Nun demonstrated a high-volume leg-building workout.

During her time competing in the IFBB Pro League, Bailey managed to reach the pinnacle of bodybuilding after capturing the Women’s Physique title at 2013 Olympia. Her conditioning and back development were among the best in her category. Looking to defend her title at the 2014 Olympia contest, Bailey brought an excellent package but was unable to stop the momentum of first place winner Juliana Malacarne.

After stepping away from the sport, Linn Bailey remains a bodybuilding staple with her demanding workouts and massive social media presence. One of her latest training sessions involved four-time Mr. Olympia Jay Cutler. The two Olympia champions teamed up for a brutal chest and triceps workout.

Joining Dana is Kristen Nun, a female bodybuilder with a spectacular upper body. This isn’t the first time Dana and Kristen have teamed up to build muscle. They shared an intense arm workout back in June, which left Bailey exhausted after admitting it was the first time she trained her arms in years. However, this time around, the duo decided to attack leg day.

Bailey and Nun start the workout with a warm up set of leg extensions before moving to any heavier exercises.

“Normally I would start with squat but we’re going to do some leg extensions starting with like 30 reps, then 20 reps, then 15, then we’ll get to some heavier sets. I feel like we did this last time, and then like the ten little flutters” Dana Linn Bailey said.

According to the former Olympia Women’s Physique champion, hack squats fit well into her workout routines because they put less pressure on her knees.

“This one doesn’t hurt my knees. Hack squats are very specific ones. Normally, these hurt my knees so much, but this one is good. I don’t want to feel pressure in my knees when I’m squatting like at all.” Dana Linn Bailey told Kristen.

Dana and Nun’s focus today is on high-volume.

“Litte higher volume today, than I would typically do. We’re only doing one exercise at a time today and try to build up to as much weight as I can.”

Before continuing, Dana said it’s important not to overthink training legs. She added that this routine will include a lot of the staples she normally practices on leg day.

Bailey said she likes to keep the body in a state of ‘flow’ during training sessions. If she incorporates a hamstring exercise, she compliments it with a glutes-focused movement and so on.

“King of keeping it along with the flow of extension to like a quad-focused exercise. Hamstring curls to a glutes-focused or hamstring-focused squat. Dana shared. Again, pre exhausting before you get to your big compounds, so you don’t need to go as heavy.”

In Dana’s opinion, if you achieve a greater range of motion during squat workouts, then it’s not always necessary to add additional weight.

“When you have a greater range of motion than you normally would on a squat, you don’t need to use as much weight.”

Before ending the session, Bailey underlined the importance of unilateral workouts that only use one leg at a time. Their final session included four sets of Smith machine split squats.

“Ending it with a little unilateral work. I try to add something one-legged into every leg day. So you’re working one leg at a time. We’re using a smith machine. Dana told her audience. “We’re doing 10-12 reps. I kept it around the 12 rep range for each exercise.”

Even though she’s enjoying retirement, Bailey is able to maintain an incredible physique year-round with hard work. Her latest high-volume leg workout with Kristen Nun showcased their impressive strength and stamina.

RELATED: How to Squat and Build Better Legs with Bad Knees

Dana Linn Bailey and Kristen Nun appreciate the fundamentals on leg day and value a good pump. Judging by their willingness to push for reps, it’s no surprise that Dana and Kristen have been able to maintain their physiques for quite some time.