Big Ramy takes to the scales with his clothes on, while facing off with other top bodybuilders at the 2021 Mr. Olympia press conference 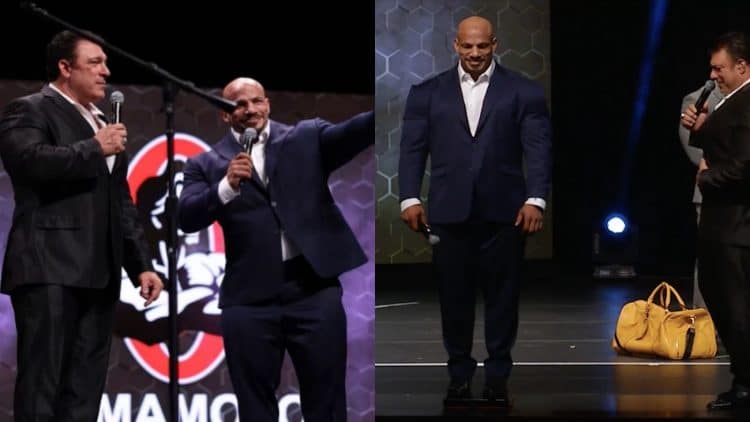 The 2021 Mr. Olympia goes down in Orlando, Florida, from October 7th-10th. Ahead of the contest, reigning champ Big Ramy took to the scales at the press conference, to show how much size he is brining to the stage Friday night.

Ramy has been one of the top bodybuilders in the world for a long time, but really turned a corner when he had a flawless performance to win the 2020 Olympia, and become the 16th man to hold that title. While everyone competing hopes that he is beatable, many people feel that if he can stay consistent, he will hold this title for a long time.

His next step in that comes this weekend, when he takes the stage in Florida in the hopes to get his first title defense. At the press conference on Thursday, the Egyptian was asked about his weight ahead of the contest, where he said he weighed close to 290lb.

However he was then challenged to take to the scale, which he happily obliged. Wearing his full suit and holding the mic, the producers revealed onscreen that he weighed 303lb, although it is worth noting that Bob Chicerillo announced the weight as 305lb.

That being said, Big Ramy was not the only Mr. Olympia contender onstage, and the rest of the athletes were not impressed with his size. Namely there was William Bonac, who was quite vocal about the champ, and how size does not mean anything alone.

“I’ve beaten him a lot of times, and I’m going to beat him again.”

Then there was Brandon Curry, who lost the title to Ramy in 2020, after winning it while it was vacant in 2019. He admits that size is important, but it is a matter of how that size is used, which has been an issue for the Egyptian in the past.

“Size does matter, but we’ve always had Big Ramy. He wouldn’t be Big Ramy if he wasn’t big. Therefore, he showed up as Big Ramy again, but we all got our plans and our packages. The key is to standout on stage, and we all know that size alone doesn’t make you stand out on stage. It’s the finer details that makes bodybuilding great,” Curry said.

Ramy himself also has a lot of confidence in the package that he is brining to the stage. In fact, he explained that he has been putting in work to be a better version of himself, than the one that won the title last year.

“With all my respect for my friends, because I know (how hard everyone worked), but I am working to beat myself and I did that,” Ramy said.

It is going to be exciting to see how Big Ramy looks onstage, alongside the rest of the top contenders at the 2021 Mr. Olympia. This is shaping up to be an exciting contest.