Hunter Labrada was no match for Nick Walker at Mr. Olympia 2021 Press Conference 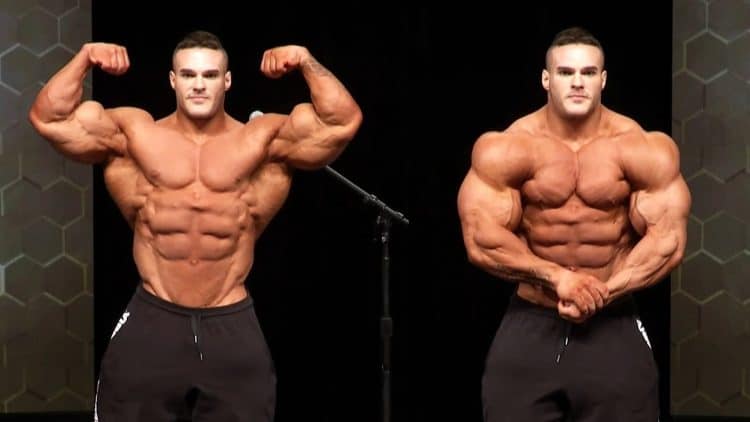 And… it’s a wrap for Olympia Weekend 2021 Press Conference. Olympia Weekend did away with the old-school chair and table format for this year’s edition of the press conference. This time around, we had 2-5 athletes (from the same division) come face to face for a quick QnA round.

Honestly, the 2021 Mr. Olympia press conference was far better than the previous editions. It was like UFC weigh-ins but friendlier.

Things got a little heated when Hunter Labrada and Nick Walker walked on stage for their interview. Nick looked ready to go from the moment he stepped inside the frame. While most other athletes wore an upper to cover their physiques, Nick Walker walked out wearing a vest.

When Things Got Heated

Bob Cicherillo did not have to do much to get Nick Walker all fired up. While Hunter Labrada remained calm throughout the interview, Nick decided to take off his vest and put on a show for the audience.

“I Got One More Show to Win” – Walker

Frankly, that was not very confident of Hunter Labrada. Fans (at least we) except our Mr. Olympia to be confident and bold, Labrada, on the other hand, looked resigned.

Bob then asked Hunter if he would do fans a favor and posedown with Nick. Hunter declined, saying that he would rather save it for tomorrow.

No matter how hard you try, you cannot keep Kai Greene out of Mr. Olympia. During their interview, Hunter made apples and oranges comparison between his and Nick’s physique. Bob then asked Nick if he was the apple or orange in the comparison, to which Nick replied that he was more of a banana guy.

Bob Cicherillo thanked both men for not bringing up grapefruit (a reference from the infamous Kai Greene video). The ensuing awkward silence was broken by a faint laugh from the crowd.

Here is the list of athletes who will be going head to head this weekend for the 2021 Mr. Olympia crown:

Congratulations to the Olympia team on making the Mr. Olympia press conference exciting. For the first time, it did not look like an athlete would doze off on stage.

During the press conference, the new Olympia brand owner, Jake Wood, mentioned that Mr. Olympia 2021 stage would be unlike anything anyone has ever seen. We cannot wait for Nick Walker and company to step on stage tomorrow.

We will be hooked to our screens throughout the Olympia weekend.