Check out this before and after of Big Ramy in 2010 and 2020. He made huge gains and although there were roadblocks along his journey, he ultimately prevailed to become the new Mr. Olympia champion! 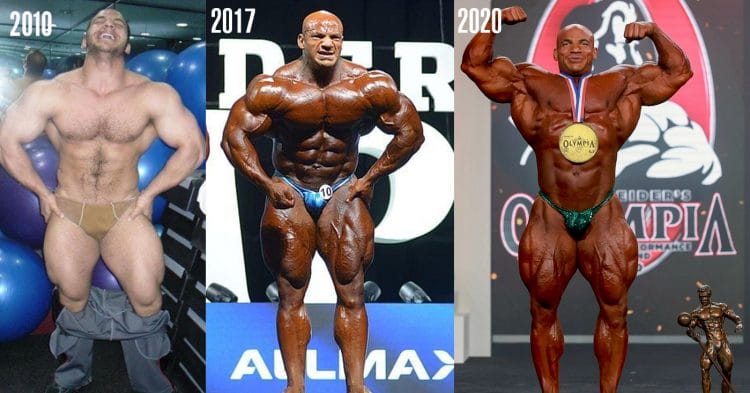 Mamdouh Elssbiay, aka Big Ramy, did not have an easy path to winning the 2020 Mr. Olympia title. He went from a 2nd place finish in 2017 (behind 7x winner Phil Heath) to 6th the very next year.

At that point, anyone would be discouraged. Not to mention, there were many who thought his chances of ever becoming Mr. Olympia were over.

So the Egyptian native decided to take the year off in 2019 to focus on himself and his family. Then when news hit that he’d be returning to the 2020 Arnold Classic Ohio, fans were anxious to see if he made those much-needed improvements.

Then, as he was preparing for the 2020 Europa Pro, news hit that he tested positive for Covid-19, and there were his chances at qualifying for the Olympia… or so, that was the case until he received a special invitation to the 2020 Olympia.

… And boy did he make the most of it, showing up to the 2020 Olympia in his best shape ever, winning the title, and dethroning the defending champion Brandon Curry.

He also beat out Phil Heath and the rest of the fierce lineup. We can’t say we expected that but he brought the conditioning and 100% deserved that Sandow trophy.

Big Ramy came a long way, and it’s incredible to see how he’s transformed his physique over the years.

Related: Chad Nicholls Says Big Ramy Will Be Even Bigger In 2021

Of course, he was impressive back in 2010 (although with much less development) and you could already tell that he was blessed in the legs department. But Ramy was always criticized for his legs being too big in proportion to his upper body, and many have pointed it out.

His legs were still huge at the 2020 Mr. Olympia contest, but overall, he was clearly better than everyone else, having phenomenal proportions and detail. In addition, he brought up his conditioning, one of the big problems he needed to fix.

This year’s Olympia was much different from years prior due to the pandemic, causing the prestigious event to be moved to Orlando, Fl.

But that didn’t phase Big Ramy… he came in and took that Sandow… about time!