Kyle Kirvay is pushing some serious weight with speed in training and shares his gruesome leg workout. 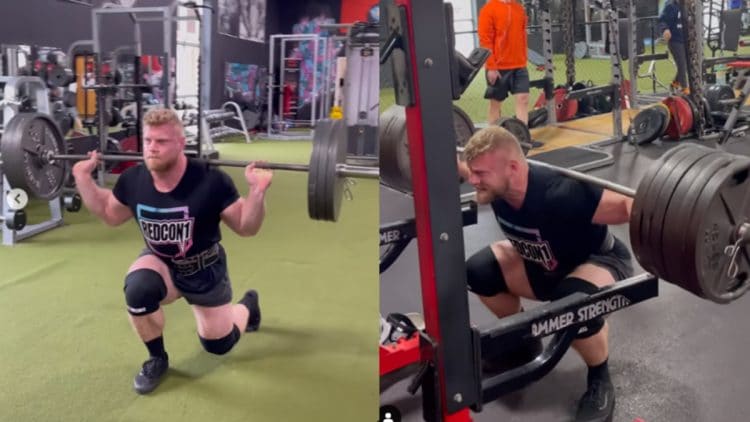 Kyle Kirvay has recently been making waves in both the powerlifting and bodybuilding community through his amazing lifts. He is a machine in the gym and his strength feats continue to impress the fitness community. On April 8th, Kyle Kirvay shared a video of his gruesome leg workout, and as a part of it, he squatted a humongous 585 lbs for 10 repetitions.

To make it more impressive, immediately after completing 10 reps with 6 plates on each side (585 lbs), Kyle Kirvay lowered the weight to 495 lbs and did squats until failure. He only used a lifting belt and knee sleeves to aid him in the lift, which makes it completely raw. It is incredible to think that this exhausting squat set is just the start of his leg workout.

“A true TIGER leg day. Making the gym my playground. A mixture of strength, explosiveness, balance, and mobility.”

On the first slide of Kyle Kirvay’s Instagram post, we can see him completing 10 reps with 585, then lowering the weight and going until failure. The back squat is one of the most effective exercises which builds serious leg as well back strength since it engages all lower body muscles. The bodybuilder with the greatest legs in bodybuilding, Tom Platz, also known as “The Quadfather” stated: “Nothing’s like squats… Nothing compares to squats.”

In the second slide of Kyle Kirvay’s post, he is seen picking up 315 lbs off the floor like it is nothing, and placing it on the top of his back. He then proceeded to perform 7 controlled steps with each leg, so 14 in total. The walking lunges are unilateral lower body movement, which means it mostly uses one leg at a time. They are great for real-life incorporation, as walking and running are also unilateral. The primary muscle groups targeted by this are quads, hamstrings, glutes, soleus, gastrocnemius, abdominals, hip abductors, and adductors.

Kyle Kirvay loaded the belt squat machine with 4 plates on each side (360 lbs) and performed reps until exhaustion. He was able to get 11 repetitions before having to stop. The belt squat is a variation of the back squat, but with reduced stress on the lower back and spine. After Kyle Kirvay trashed his legs on the first two exercises, the belt squat enabled him to put in a few more valuable reps in.

As Kyle Kirvay was doing unassisted sissy squats, he used the 45 lbs plate as a measure of balance. He was able to do 12 repetitions, but we got to see him struggle quite a bit, as his legs reached the point of full fatigue. The sissy squat also uses the entirety of the lower body, but the quads are focused significantly more than the other muscles.

Following the workout, Kyle Kirvay showed off his insanely pumped and veiny legs in the last slide of his Instagram post.

Kyle Kirvay won his IFBB Pro Card at the 2018 2018 NPC Universe Championships in the Men’s Heavyweight and Classic Physique. He took part in four more competitions throughout his bodybuilding career, and won 2 of them. Kirvay also won the only powerlifting meet he took part in, which was the 2022 USPA Battle at Atilis. His performance in that contest was:

After seeing how strenuous Kyle Kirvay’s leg workouts are, it is no surprise that he can do 22 repetitions with 495 lbs, or 10 reps with 585 lbs. It is also very impressive to see Kyle use the perfect form while moving these kinds of weights in the gym. After a couple of these workouts, there is no doubt that his squat will get even heavier, and his physique will get even better.

Dead-Stop Training – Why and How to Do It