Huge Professional Bodybuilders Who Have Lost All of Their Muscles

Massive Bodybuilders Who Lost Their Gains

Bodybuilders who lost all the gains.

When it comes to professional bodybuilding, fans and pundits alike usually focus on the stories of lifters who have taken themselves from skinny nobodies to massively muscled individuals you could barely consider human. It’s the nature of the endeavor.

You tend to want to think about the positive effects of bodybuilding, the success stories, and all the while never give much consideration to what happens once an individuals bodybuilding journey comes to an end.

Not every bodybuilder is like Robby Robinson or Jay Cutler and keeps their gains for all time. Some bodybuilders end up losing their gains and all the glory that came with it.

This list of bodybuilding standouts are examples of the top pros who reached the pinnacle of the sport and have now regressed and lost all their gains. 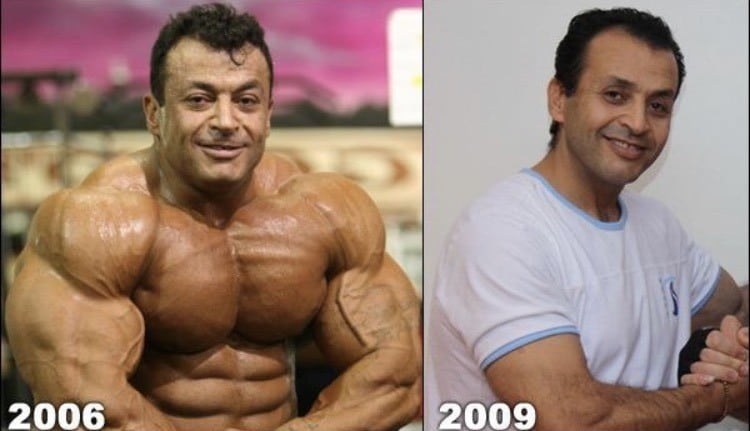 One of the biggest mystery cases in bodybuilding, Mustafa Mohammad was a bodybuilder who showed great promise. In his twenties, he won two world titles outside of the IFBB and looked like he could potentially dominate the competition.

Then he retired suddenly only to return nine years later. While he was still physically impressive he was never quite able to get to the top of the sport. Fast forward another decade and it would appear that all of Mustafa’s gains have left him. Despite that, he still had one of the most memorable physiques in bodybuilding history. 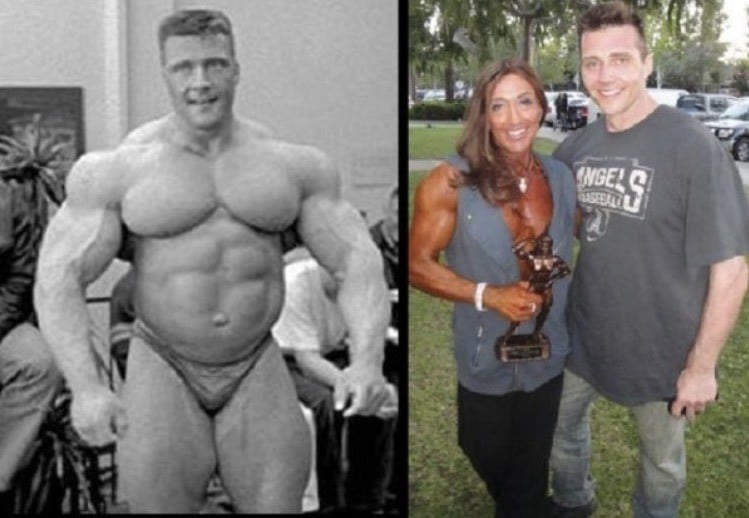 In the case of Jean Pierre Fux, an unfortunate mishap in the gym proved to be his undoing. At the height of his powers, Fux was an absolute mass monster who turned heads at every competition. He had the size and the physique to take his career very far.

But ultimately it was a squatting accident that would prove to halt his career. While he still tried his best to train after his knees were destroyed, ultimately he had to give up on the idea of continuing his bodybuilding career and lost his gains as a result. 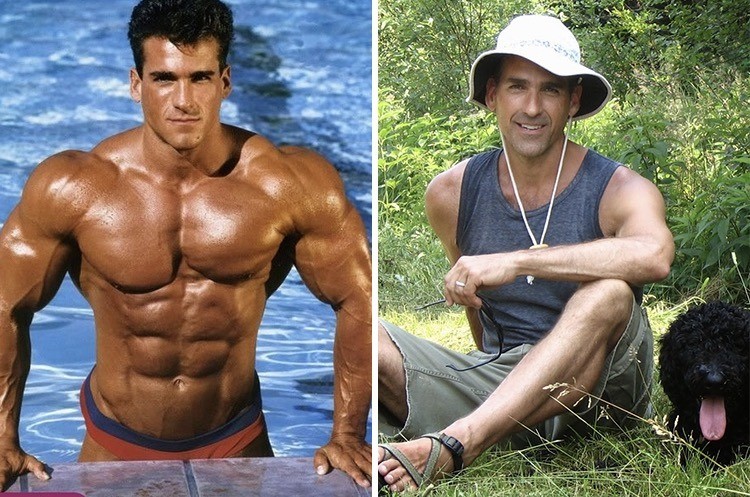 Often considered one of the most aesthetic bodybuilders in the sport’s history, Bob Paris was a high-level competitor during the eighties and the era of Lee Haney. He was known for his artistic approach to posing and was clearly one of the best bodybuilders of his era.

Eventually, he would retire from the sport in 1991. Since then Paris has become a Civil Rights advocate, has performed in stage plays and on television, and has written a number of books. Since that time it’s clear that he hasn’t hit the weights with relish for some time as his gains have all but vanished.

“The Real Deal” Chris Cormier a well known in the bodybuilding industry, started competing as a light heavyweight in the NPC Nationals in the 1987, finishing at 1st place and started a long and quite successful career of competing at the biggest stages of bodybuilding, including Mr. Olympia – many believing that he could have been a Mr. Olympia champ if it wasn’t for a spinal infection in 2006 that took him out of the sport for an extended period of time in his prime.

After Chris Cormier recovered from the injury, he decided to share his Sharing his 30+ years of knowledge with all future athletes. But in recovering from a spinal surgery came with serious consequences, the loss of gains. 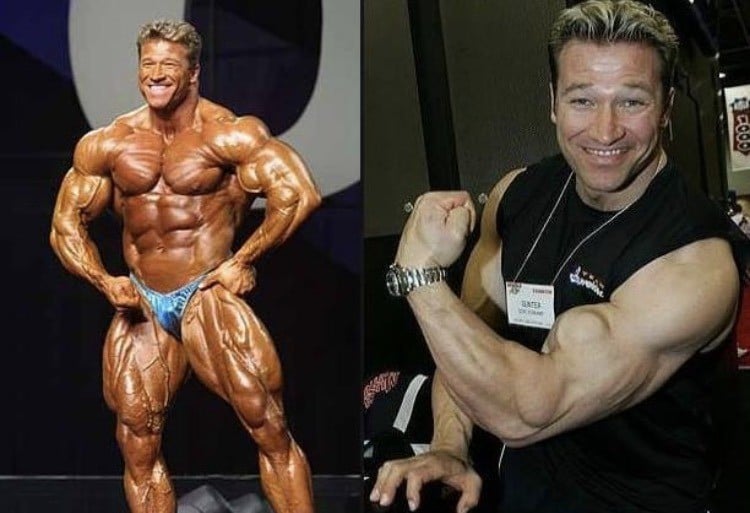 Eventually, he retired and moved on to acting where he has snagged a number of roles, including his turn in the 2006 cult classic Beerfest. Since then, however, Gunter’s gains have gone the way of the dinosaurs. 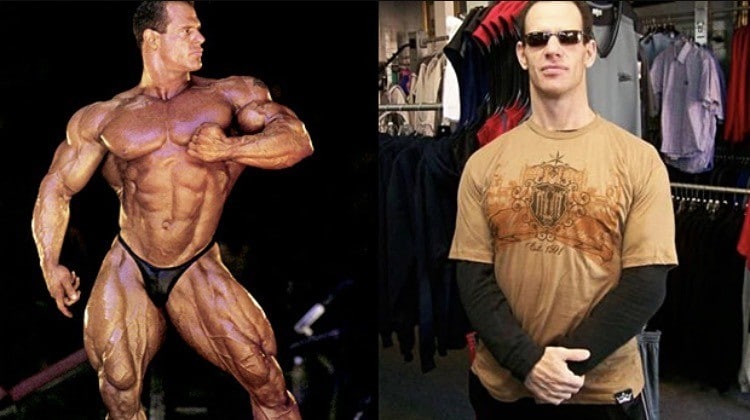 In his heyday, Tom Prince was an absolute beast of a man. With an offseason weight of 312 lbs and a competitive weight of 230 lbs, Prince pushed his body past its limits in order to compete at the highest levels of the sport. But it’s perhaps that weight disparity that ultimately caused his downfall.

Cutting 82 lbs to get down to his competition weight, along with many other factors, caused Prince’s kidneys to fail, which ultimately led him to retirement. Since then his body has completely shrunk leaving no trace of the massive muscle he once possessed.

Dillett was one BIG monster freak among the freaks. He was 188 cm tall, weight on the stage of Olympia – 287 lbs.  Not only did he pack a ton of muscle during his competitive years, he was shredded to the bone.

In the 1994 at the Arnold Classic he suffered a major muscle cramp due to severe dehydration he “freeze” on the stage for sometime. Dillett competed until his retirement in 2006.

His best placing at the Olympia was 4th place at the 1994 Mr. Olympia and 3rd place at the Arnold Classic. Just like all the other bodybuilder in this list, time hasn’t been kind with his gains.

The King of bodybuilding, the 8-time Mr. Olympia winner and one of the biggest and strongest bodybuilders in modern history Ronnie Coleman was the supreme ruler of bodybuilding world during the early 2000’s.

No one could even come close to his massive physique, symmetry and strength. Ronnie isn’t just one of the best in the history of the sport – he’s was one of the strongest and hardest working. He was famous for his 2000 lbs leg press, 800 lbs squats and 200 lbs dumbbell chest presses.

This attitude spreads far beyond just lifting too. Ronnie Coleman gave 100% to every single thing he was involved in. This includes his original day job as a police officer. He retired from competing in 2007 after placing 4th in his last Mr. Olympia competition. Since then Coleman has been working on his supplement line and dealing with multiple back and hip surgeries he picked up from all those years of heavy lifting.

After 12 spine surgeries and possibility of never being able to walk again he literally had to learn how to walk again and finally back on his feet training, slowly picked up lifting weight again but his monstrous size has severely diminished.

What do you think of these top pros losing their gains?