The two-time Classic Physique Olympia champ 'think he can bring some balance to the 212' next year, will compete at 2022 Tampa Pro. 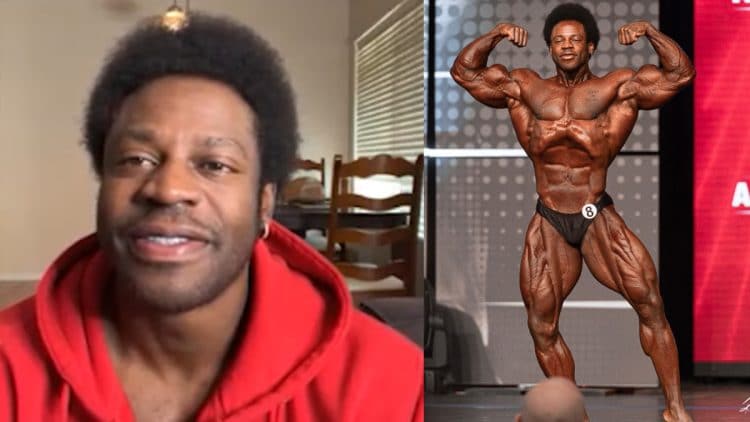 As a two-time Classic Physique Olympia champion, Breon Ansley has cemented his name among the best in the sport. In a recent interview, Breon is devising a gameplan for his final year in Classic Physique and ironed out how he will approach his switch to 212.

After coming in fourth at the Arnold in March, Breon trailed behind Urs Kalecinski in third place, runner-up Ramon Rocha Queiro, and the two-time Arnold Classic champion Terrence Ruffin. In the aftermath, Breon reflected on his performance and admitted that the outcome has been difficult to accept. Despite coming up short, Breon is optimistic about his future in the sport.

Tipping the scales at 206lbs following the Ohio show, the 43-year-old Breon has made it abundantly clear that 2022 will be his last year competing in Classic Physique. Despite facing adversity in March, Ansley is confident that his new game plan will result in a different look at Olympia in Dec.

Breon Ansley on Classic Physique in 2022: “This Year Has To Be The Year”

In a recent interview with Muscular Development’s Ron Harris, Breon discussed his gameplan for this year and intends to bring a whole different look to the Olympia stage.

“Well, I guess it’s just a personal thing to make sure we come at our best you know. I wanted to go out, just wanting to be at a 1000%. I’ve never hit 1000% yet in Classic yet, in any Classic year. I just wanted to hit 1000%, wanted to be as sharp and try to see my full potential still coming down to 180lbs. This year, we’re going to have a whole different game plan to try to do that. Have a whole different look, because it has to be right.” Ansley shared.

Breon believes judges have grown accustomed to his physique at top-level shows. However, he intends to leave the Classic Physique division on a high note.

“As now, I’ve been sliding a bit and the physique is now, I think the judges have already seen this, my physique, as it is in Classic enough times to where they’re like ‘okay Breon, you gotta bring something jaw dropping now, you’ve got to bring something now that’s better than the wins we saw’. So, this year has to be the year. Breon said. If it’s going to be the last year. So that’s what’s taking me so long to hit everything by 1000% and I haven’t done it yet. Now, we’re going to put a game plan together to hopefully hit it 1000%. We’re hopeful about it.”

According to Breon, it’s less about the physiques he’s competing against, and more about him realizing his ultimate potential in the Classic Physique division.

“Yeah, of course. I mean, you know, if you’re winning, your mindset is going to change and you’re going to have a certain outlook on things but if you’re definitely sliding down, expecting a first place, expecting to win the Arnold and end up getting fourth and getting beat by, with all due respect, those guys are men. Those guys physiques are great, Urs, Ramon, and Terrence especially but you know, with more of my potential and me having maybe being able to fill up and have a few more days to fill up, and kind of have my body bounce back.

I think I’m really tough to beat, and that’s why I’m at a disadvantage in Classic because even with the Olympia we get less than 48 hours to fill back up and bring our body back. Carb back up. So, it’s like especially for me, when I have to come down in weight so much, and probably all three of those guys, and I hear Chris still has some pounds to go until he comes up in his weight class. So, I’m really at a disadvantage against guys that haven’t even hit their max in weight yet, their weight cap yet. So, yeah that was instrumental in, even more instrumental in the decision I’ve already been toying around and thinking about it the last few years. Again, I’ve been stubborn because I personally wanted to hit a look that I’m totally happy with 1000% no matter what happens, win or lose.” Breon Ansley shared.

Since Classic Physique competitors have less of a window for re-carbing and re-fueling after weighing in, Breon believes he’s at a disadvantage against athletes who have yet to reach their ideal max weight. Before Breon leaves Classic Physique, he is determined to achieve a physique he’s completely happy with.

Before he tackles the Classic Physique Olympia stage, Breon intends to get his feet wet months before by competing at the Tampa Pro show scheduled for August.

“We’re going to be there six-seven weeks out. (Olympia) We are going to be at that weight cap six or seven weeks out and be able to fill up, re-feed. Come up, come down. Come up, come down. So we maintain that hardness when we come up and come down right there. And have a longer period of time when my body is at that weight cap and leaner over a longer period of time.

I’ll be peeled right there if I’m at that weight cap. So we are going to be right there peeled at the weight cap for a longer period of time. So, that way, I’ll be saving the body with less cardio. Saving the body with less eating. I might be able to eat until weigh ins which would be the exact opposite of what I’ve been doing the last couple of years. I’ve been breathing just air to make the weigh ins the last couple of years. That’s the game plan. That’s how we are going to do it. You know, we already started. I’m giving you some insider information a little bit. I’m in prep right now. Well, the Olympia is way out.”

Yeah, you did the math. You’re smart. You’re smart Ron. Yeah, we are going to get on that stage (Tampa Pro) before the Olympia.” Ansley shared.

Ansley competed at two 212 shows in the past but slept through the finals of his first event (2014 New York Pro) by accident. Nevertheless, the Classic Physique competitor believes he can bring some balance to the division next year. According to Ansley, the weight cap in the Classic Physique division is the main reason for his moving to 212.

“Yeah, the 212 needs some bounce too. I think it would be great. I have a little personality and I think I can bring some balance to the 212, get it back. You know, have things happen, and getting it back to the Arnold. That type thing man.”

“What a story. New York Pro was my debut 212 show in 2014 and just like how we did in the amateurs right. They only invite the top 5-6 back to the night show. So, that’s what I was used to. I thought the same thing happened in all the shows, Pro, amateur, whatever. I was waking up and I had all kinds of calls, and this was after prejudging. I had all kinds of calls and a couple of hours after prejudging after I had eaten myself to sleep, and I got calls and texts, ‘where are you at? You’re supposed to be on stage for your routine’. I missed it man. Eating my sorrows away but genuinely not thinking that I was supposed to be there anyway. So, I definitely wrote an apology email to Steve and told him the truth and we were able to laugh at that one, later on but that’s what happened.” Breon said.

RELATED: Chris Bumstead: ‘I Think Breon Ansley Should Be’ In The 212 Division

Breon is confident that his gameplan will pay off at the 2022 Mr. Olympia. Despite eying the 212 division next year, Ansley is firmly committed to his current prep as this will be his final season competing in Classic Physique.