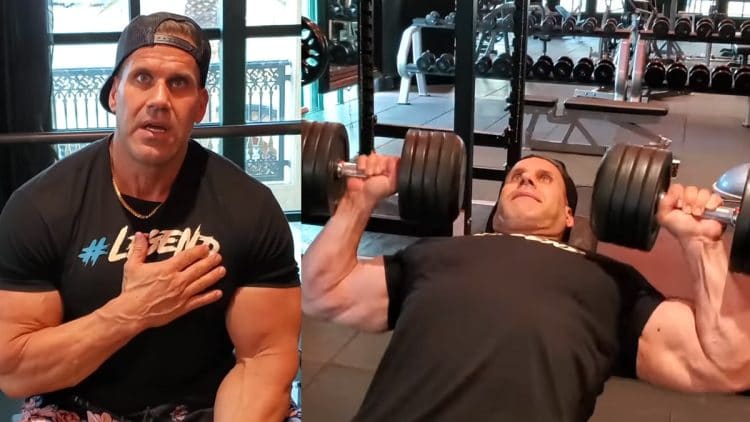 Bodybuilding legend Jay Cutler recently shared calves, chest, and biceps workout. Cutler is the former 4-time Mr. Olympia champion and one of the most famous bodybuilders of the 2000s era. While he has significantly downsized since retiring from the sport in 2010, the 48-year-old still maintains an impressive physique all year round.

Jay Cutler belongs to the rare breed of bodybuilders that went through their entire career without having to sustain a major injury and health issues. He attributes this to his tendency to listen to his body and modifying workouts to suit his body type and limitations. Cutler has transitioned well to the social media age and routinely shares his diet, workouts, and other details on various platforms. Recently, he also opened up about his steroid cycles throughout the years.

Jay Cutler recently shared calves, chest, and biceps workouts on his YouTube channel. It was a high-volume workout that focused on a higher number of reps per set and moderate weights. Cutler went through the chest and biceps workout at Kilo Club Las Vegas in the Tivoli Village in Summerlin.

The day was dedicated to biceps and chest workouts. However, Jay Cutler incorporated calf exercises and started the day with calf raise. Cutler feels that it is a weaker part of his physique. While discussing the reasons behind training the perceived weaker muscle at the very beginning, Cutler said:

“Prioritize the weak muscles. So meaning, if you feel like something else needs attention… Prioritize that muscle. Make it a priority when you go to the gym. You can have your mind like I’m gonna hit this really hard.”

After performing three sets each of standing and seated calf raises on the machine, Cutler went on to train the biceps and chest.

Jay Cutler reiterated that he starts the chest workout with this movement almost every single time he hits the muscle group. He modified the seat position and lowered it significantly in order to ‘really get under’ and feel the compression in the chest to get maximum benefit out of the workout.

Cutler drew attention to his side profile while performing the workout. Instead of keeping his back straight up against the backrest of the machine, Cutler only keeps his torso in contact with the machine. He arches his back to maintain a gap between his lower back and the backrest of the machine. Jay Cutler explained that lowering the seat and arching his back compels his body to push the weights upwards. This in turn, helps get more contraction in the chest.

“I want to create an arch in my chest, you know. That’s very important for the seat height.”

“When I scoot forward, I press up. The whole goal is the contraction of the chest,” Jay Cutler said.

Jay Cutler performed two warm-up sets of 10 to 12 reps and moved on to the next exercise after three working sets.

Jay Cutler performed the bodybuilding staple for the upper chest. While he did not reveal the exact reason, Cutler stated that he prefers to do more inclined workouts when it comes to chest. Jay Cutler performed the first set of 12 reps with approximately 70lbs dumbbells and increased the weight for the next set to move on to the next one. While speaking about the rest periods, Cutler advised to maintain a 45 to 60 seconds gap between two consecutive sets.

Jay Cutler next performed bench press on Smith Machine. Machines in general allow an individual to control the weights better and increase emphasis on the target muscles. Therefore, they significantly reduce the chances of injury. Jay Cutler stated that he is strictly against flat bench press and prefers to perform flat bench press on the smith machine rather than with free weights. Cutler went down the memory lane and said that he stopped bench pressing with free weights after suffering a pec injury back in the 2000s.

“Barbell pressing is probably one of the most productive exercises for me. I get super pumped from it,” Jay Cutler said.

Jay Cutler performed three sets (12 reps each) of the Smith Machine bench press and moved on to the next workout.

Jay Cutler finished the chest workout with three sets of chest fly on a cable machine. The first two sets consisted of 12 reps each while the third set was a failure set. Once again, Jay Cutler modified the seating position similar to the Hammer Strength incline press to get maximum contraction to the chest.

Courtesy of the JayCutlerTV YouTube channel, you can watch the full workout video here: